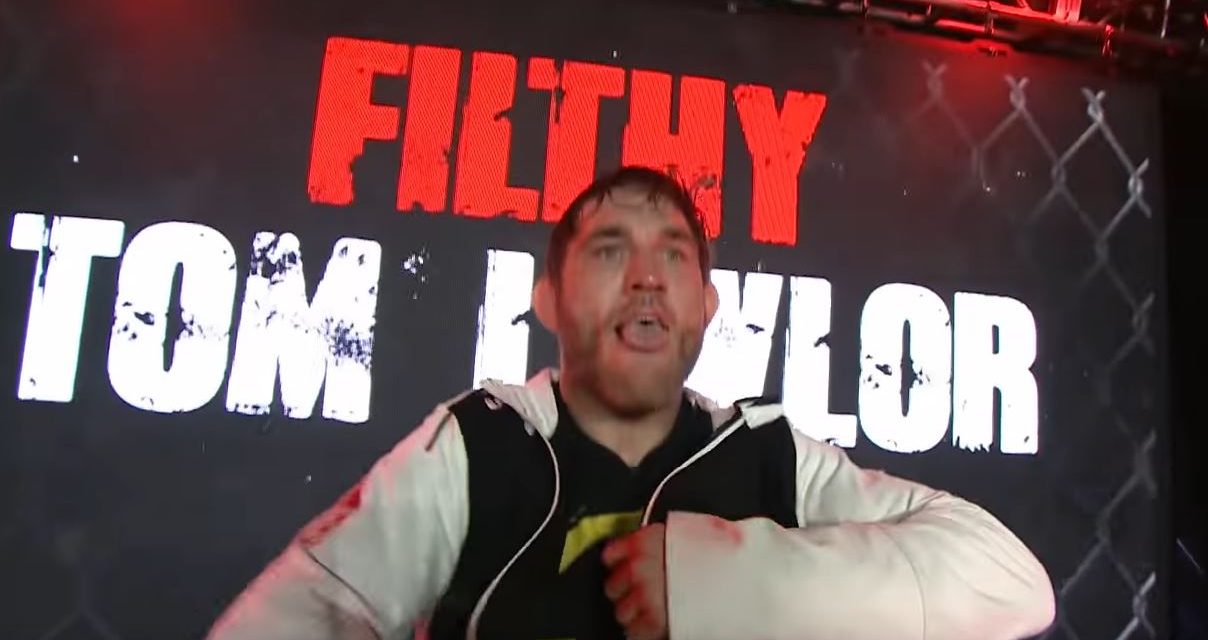 Paradigm Pro Wrestling’s Heavy Hitters 2 event takes place this Friday, July 24, and will be available to watch on IndependentWrestling TV. Its main draw is a special tournament contested under UWFi rules, which is based on that namesake promotion, itself the pioneer of MMA.

And that couldn’t be more perfect for MLW’s “Filthy” Tom Lawlor.

As a successful MMA fighter with years of experience, the 37-year-old Lawlor promises to bring a high degree of intensity and legitimate skill. Yet in describing why he’s a favorite to win the tournament, he warned the tournament’s other participants what they’re in for.

“Every time I step into the ring, I showcase what I’ve been doing for the past 23 years: legitimate professional grappling arts, striking and submissions,” Lawlor told SLAM! Wrestling. “My goal is to bring as real of a pro wrestling contest I can to the ring, to the fans, and to my opponent. I’m not there to play someone else’s game or showcase abilities; I’m there to put on a fight.” 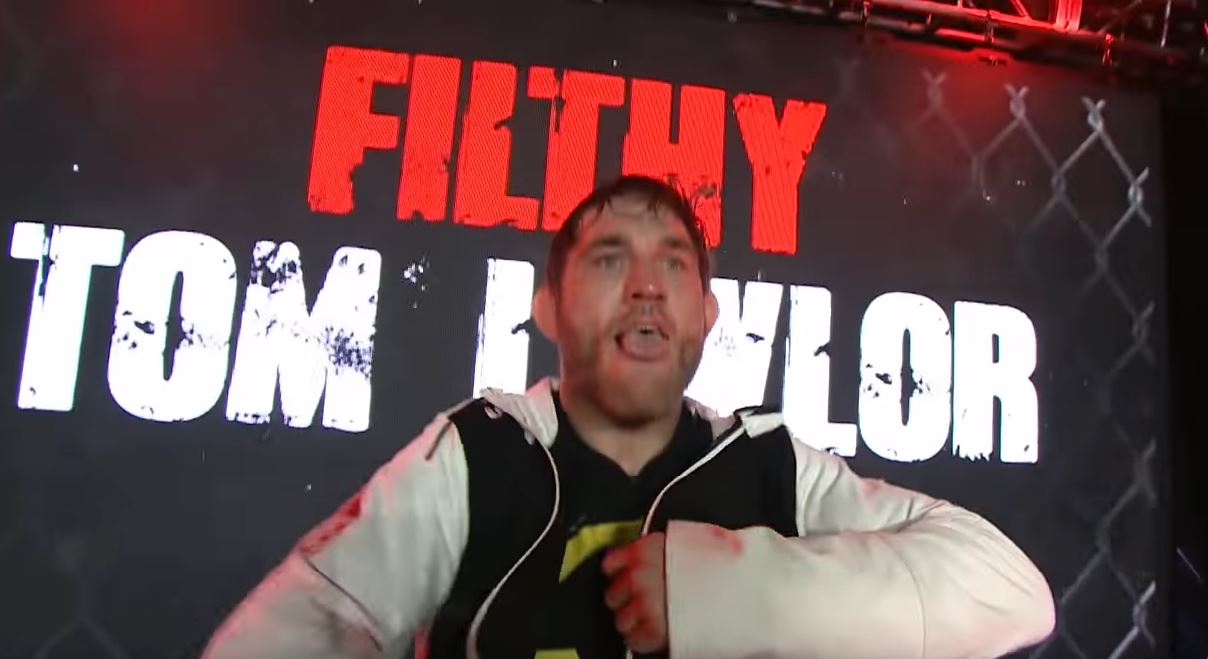 Tom Lawlor enters the arena for a match. Image courtesy of MLW.

Heavy Hitters 2, presented by Kentuckiana-based Paradigm Pro Wrestling, will center on a revival of an old style of wrestling. Inspired by Japanese shootfighting promotion Union of Wrestling Forces International (UWFi), this tournament will have different rules and structure than what most wrestling fans may be used to. The UWFi rules matches will not have pinfalls as a path to victory. Instead, matches can only be won via knockout, TKO (technical knock-out), submission, or via point system.

For those unaware, Lawlor explained the difference between a knockout and a technical knockout (TKO). The former is when a single move renders someone unconscious, whereas the latter is when a referee stops a match due to one combatant being unable to continue.

So in a nutshell, it’s possible that Heavy Hitters 2 will showcase someone being beaten with one single move or being beaten so badly the referee will have to stop the carnage from continuing any further.

Those parameters suit Lawlor perfectly. To him, pro wrestling and MMA are the same thing: the art of selling the idea of a fight, a conflict, to people, and the audience is there to watch one man walk out victorious.

Lawlor has been around both pro wrestling and MMA for over two decades, and has accomplished quite a bit in both fields. His MMA career record includes ten wins and seven losses. Of those wins, four were by knockout (including one fight in which he won in ten seconds) and four were by submission.

While that might not seem like much to some, Lawlor also has another advantage: he doesn’t back down from a fight, no matter how hurt he is. In a 2012 MMA fight, Lawlor suffered a major tear in his right ACL/meniscus from a throw from his opponent. But instead of calling the fight off, Lawlor continued the fight and ended up winning the fight. Although that injury sidelined him for over a year, Lawlor admitted that moment the most to him.

On the wrestling side, Lawlor experienced resurgence in his career since 2014, and debuted for MLW in 2017. There, he defeated Low Ki to win the MLW World Heavyweight Championship in 2019, which was a major accomplishment. Not because he won the title, but because of how big of a wrestling star Low Ki was to him.

“Every time I’m in the ring with him [Low Ki], I learn a lot. His style, the way he portrays himself in the ring, makes him one of the best guys ever. I love how he’s managed to blend his martial arts skills with his wrestling style. If you look at what exciting, modern wrestling is, it usually blends legitimate throws, very hard kicks and strikes and some acrobatic high-flying all together. And a lot of what’s on now is based on the style of Low Ki and the other guys of the early-to-mid 2000s. You feel a difference when you’re in the ring with someone that’s a master of their craft.”

For these reasons, Lawlor issued a warning to the other tournament’s participants. He prides himself on his legitimate combat skills and prefers challenging people with similar skillsets as opposed to wrestlers that prefer the more ‘entertainment-oriented’ style, whom he considers ‘cannon fodder’. 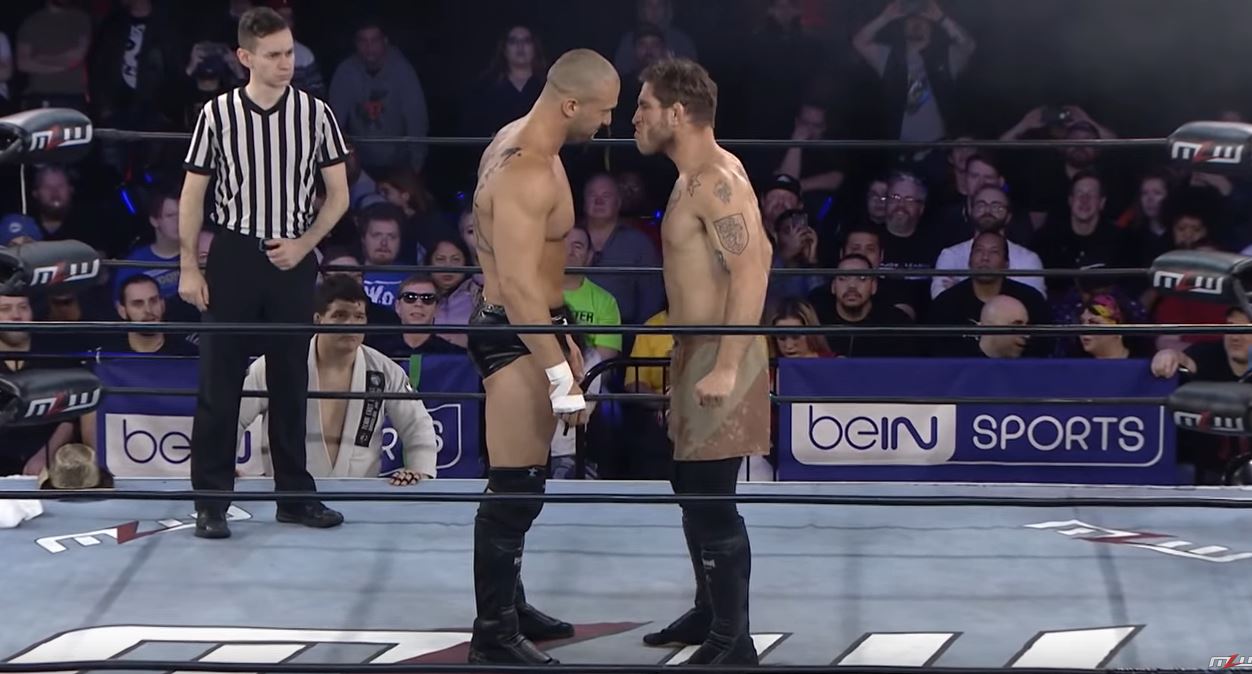 Tom Lawlor isn’t phased at all by the taller Killer Kross. Image courtesy of MLW.

And he had a very strong message for his first-round opponent, Calvin Tankman.

“He [Tankman] drew a bad card in this style of tournament. We’ve seen what happens when you take a big, 350-pound guy like him and put them against a smaller, 205-pound fighter like me. This just isn’t a tournament that lends itself to someone like him. I’m sure he has a phenomenal future, but this my fight.”

Beyond this tournament, Lawlor will have a busy schedule. He will continue making appearance for MLW Underground, which airs on BeIn Sports. He will also on the NJPW Lion’s Break Collision, which can be seen on New Japan World.

And for fans still curious about Heavy Hitter 2, Lawlor had one final message.

“If you wanna see some real s**t inside of a professional wrestling then tune in to the tournament. Because it’s exactly as advertised.”

Heavy Hitters 2 emanates from the American Legion Post 204 at 412 N New Albany St in Stellersburg, Indiana on Friday July 24th. Doors will open at 7pm and the show will start at 7:30pm, with a maximum capacity of 150 people, per the State of Indiana’s reopening guidelines. Those that cannot make it in person can catch the show on IndependentWrestling TV, which provides a video-streaming service for $10 per month. Additional information can be found on the promotion’s website at ParadigmProWrestling.com