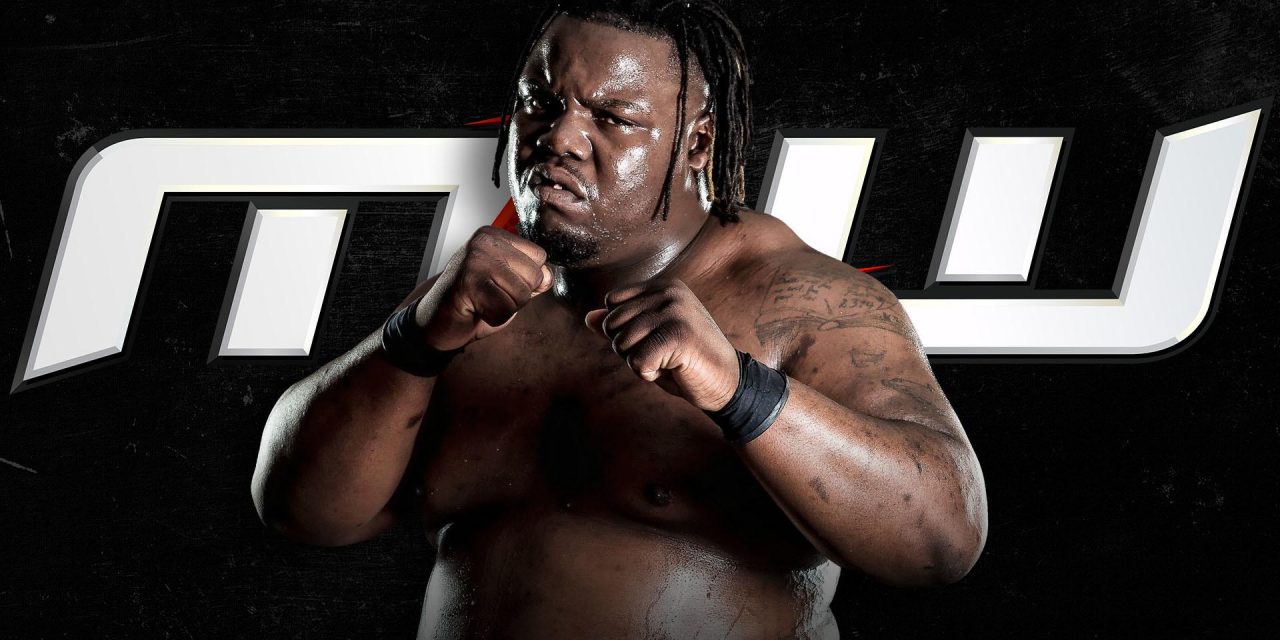 Calvin Tankman, the superheavyweight that recently signed with MLW, is the latest and one of the biggest names announced for the upcoming Heavy Hitters 2 event hosted by Paradigm Pro Wrestling.

Tankman will join 19 other wrestlers in a one-night tournament that, according to the company’s press release, will combine the athleticism of mixed martial arts with the violence and showmanship of hardcore professional wrestling.

Paradigm Pro Wrestling is an independent wrestling promotion that puts on events in the Kentuckiana (Kentucky/Indiana area). Their shows are filmed for and streamed on the internationally-recognized IndependentWrestling TV (IWTV) service, and the upcoming Heavy Hitters 2 show will be no exception. The show is unique in the modern wrestling landscape in that it borrows heavily from the Union of Wrestling Forces International (UWFi), which was a ‘shootfighting’ wrestling promotion in Japan during the 1990s. That promotion became the pioneer of the sport now known as mixed martial arts, and Heavy Hitters will include elements that made that company famous.

Matches on this show – which will include Tankman taking on fellow MLW star Tom Lawlor – will be contested under UWFi rules. This means there will be no pinfalls; instead, matches can only be won via knockout, TKO, submission, or decision through a complex point system. The winners of the first-round matches will then face each other in a 10-man Aztec Warfare match, which is similar to a Royal Rumble but with falls ending in pinfall or submission. The winner of that match will become the PPV Heavy Hitters Champion.

Tankman is easily one of the favorites to win the tournament. The 26-year-old has a major weight advantage over the competition, coming in at 381 pounds. But for Tankman (real name Christopher Heyward III), his size belies his capabilities in the ring.

“I’m a new style of super-heavyweight,” Tankman told SLAM! Wrestling. “I have a good blend of power and explosiveness. I push the envelope of the stuff Bam Bam Bigelow and Big Van Vader did. There’s nothing else like me.”

Watching Tankman wrestle is definitely interesting. On one hand, he uses his imposing stature to out-power his opponents and toss them around the ring like they’re rag dolls. On the other, he has a tendency to bounce around the ring and dive out of it like someone half his size. This dualistic approach to wrestling stems from Tankman’s two favorite wrestlers growing up: Goldberg and Rey Mysterio. He loved the former for his ability to command your attention with his intensity, and loved the latter for his wrestling prowess.

Tankman has wrestled all over the United States, but his main company for many years was IWA-Mid South. While there, he had some fantastic matches with Mance Warner and Lee Moriarty, and he considers Moriarty to be one of the best pro wrestlers he has ever seen.

“I’ve seen him put in all kinds of situations and I’ve never seen him have a bad match. He’s great at learning/adapting. I’m a big fan of his work and watching his series with Alex Shelley.”

Although he still has lots to prove, Tankman is proud of his career accomplishments thus far. Aside from his big matches against the likes of Warner and Moriarty, Tankman is especially proud of winning Bizarre Lucha’s world title at such a young age. “They believed in me to the point that they put their world title on me. In front of such a huge audience, both live and through their streaming service. I’ll never forget the fans swarming the ring in celebration with me.”

Aside from this upcoming tournament, Tankman has a busy schedule in the coming weeks and months. Right after Heavy Hitters 2, which is on July 24, Tankman will be heading to New Jersey to participate in the GCW Homecoming Show. Then after that, he will be wrestling Homicide at another NJ show on August 16, titled Violence and Suffering. He’s also looking forward to wrestling in MLW given its track record with creating stars.

“I joined MLW because I was ready to test myself at the next level. I listened for that opportunity and MLW were the first ones to be serious about wanting to help me. I felt like it’s a no-brainer. Their roster is full of young talent that they’ve made into stars. This will help me build by name internationally. I get to surround myself with elite talent like [Jacob] Fatu, [Alexander] Hammerstone, and I’m only going to learn from them.”

Heavy Hitters 2 emanates from the American Legion Post 204 at 412 N New Albany St in Stellersburg, Indiana on Friday July 24th. Doors will open at 7pm and the show will start at 7:30pm, with a maximum capacity of 150 people, per the State of Indiana’s reopening guidelines. Those that cannot make it in person can catch the show on IndependentWrestling TV, which provides a video-streaming service for $10 per month.

Additional information can be found on the promotion’s website at ParadigmProWrestling.com