AEW Dynamite: Eddie Kingston gets a shot, the Inner Circle is whole again 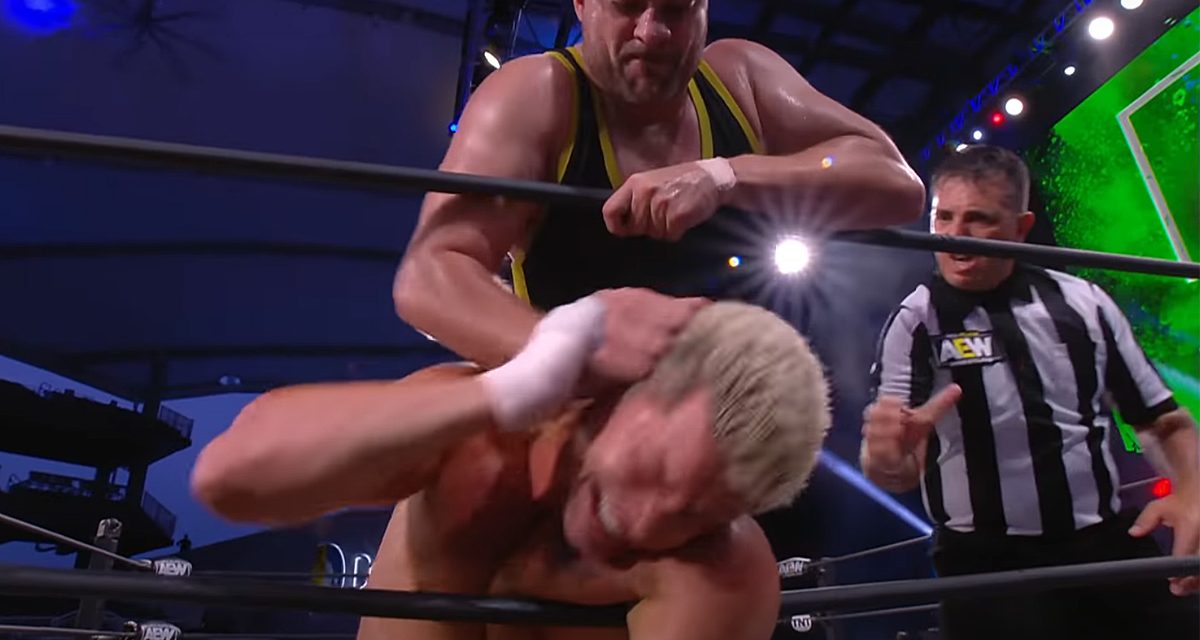 Rumor has it that there’s some kind of big surprise tonight on AEW Dynamite that hardcore wrestling fans will dig the most but even casual fans will enjoy. That’s not me saying it either, but rather Jon Moxley. Since Cody is standing in the ring already and his title is open to challenges from people outside the promotion, we probably aren’t going to have a long wait to see what, or rather who, it is. We’re not live but we are headed to Daily’s Place again on TNT, so let’s get going.

And there we go. No stranger to a good promo or a good scrap, Kingston gets himself the latter by proposing a no DQ title bout in the former. The excitement is such that J.R. even says tope suicida, new for him, and that Cody is getting whipped like a government mule (by his own weight belt), which is most certainly not. If nothing else, the open challenges give us a chance to see Cody work against wrestlers with a variety of different styles, and Kingston’s straightforward brawling is a different kind of measuring stick for the American Nightmare. There’s also something to be said for the head man of a promotion taking a powerbomb into a pile of thumbtacks, but Cody does end up triumphant after making Kingston tap out to a Figure Four.

The AEW World Champion gives some props to Taz for being a good manager and throwing in the towel on behalf of Brian Cage before his bicep snapped. That’s a low bar, but he did clear it.

I’m not familiar with Garrison, but he deserves some props for standing up to MJF’s verbal bombardment and reminding the Salt of the Earth that he lost a tag team match at Fyter Fest. That should help take some of the sting out of this ‘L’ he’s about to suffer. Eventually, someone is going to interfere in an MJF match and cost him his undefeated singles record, but tonight is not that night, even after Garrison nearly steals a pinfall. But MJF throws such a tantrum when it’s suggested that he isn’t undefeated that something is clearly being foreshadowed.

Did Dr. Britt Baker compare herself to Michael Jordan? I missed some of her promo but caught at least part of that.

Taz brings Cage to the ring and admits that the two of them had a difficult week with some heated discussions. Cooler heads prevailed and Taz did not lose his job, explaining that he threw the towel in as a business decision to prevent Cage from having his surgically repaired arm injured again. Darby Allin comes down to do … something, but we never learn what it is because Ricky Starks, the newest member of Team Taz, assaults him from behind. A short beating ends when Moxley emerges from the crowd with a barbed wire baseball bat, sending the heels into a full retreat.

Match 3 – The Young Bucks vs. The Butcher & The Blade – Falls Count Anywhere Match

Ever seen a Falls Count Anywhere match begin in the kitchen of an arena? Now you have. The action does get to the ring eventually, but there are still plenty of opportunities for Butcher to put his size to work. Blase also nearly kills himself missing a somersault dive to the floor and barely missing hitting a table with his face. Much of the best action takes place up on the stage, where the Bucks both climb up on some scaffolding and put their opponents through tables simultaneously. Killing the business, indeed.

Hey, remember Lance Archer? He wants to make sure you do by creatively dispatching some smaller guys back in the locker room. My son says he hopes they got paid extra.

Both wrestlers are relative newcomers, with Ivelisse making her promotional debut in this bout. They get plenty of time to work, and their match turns into a bit of a strong style-type contest of strikes and toughness. There are worse ways to go than that for newbies. Diamante gets the victory, possibly giving a hint toward who’s getting more of an immediate push.

The announcers remind us of Page’s amazing 12-2 overall record for 2020. Records count here, or so they say. Angels is also 2-0 since joining the Dark Order, though that figures to change here. The question is whether the rest of the Dark Order will make an appearance, and sure enough, five of them come out to take in the action from the stage. They can only watch as 5 loses, but will they make a move after the bell? Mr. Brodie Lee and Colt Cabana make it seven on one, but only Lee approaches the Hangman. This is a recruitment drive, but Page says he’s not ready to join a cult right now. Lee leaves with Cabana and the rest of the Dark Order moves in. Just when it appears no one will come to Page’s aid, FTR brings a cooler and some fists to drive off the heels. Kenny Omega hits the ring too, but a little late, so there could be more intrigue brewing between him and Page.

Jericho goes right after Jungle Boy, but the big attraction is the literally big men going toe to toe. Hager takes some flak on the internet at times, but he’s good enough to make Luchasaurus look equally good. Mark Stunt is a factor as well, with Santana and Ortiz lurking at ringside too. Hager and Jungle Boy is a combo we haven’t seen much of so far, and not a bad one. Jericho is prevented from bringing Floyd into play, and Jurassic Express almost snatches a heel-like victory when Stunt hits a missile dropkick with the ref distracted. Yet it’s Serpentico who plays the key role, striking with Floyd to help Jericho get the win. Except it’s not Serpentico but Sammy Guevara, back from his suspension. The Inner Circle is back to full strength and could run rampant if not for Cassidy and Best Friends hitting the ring.

Wasting no time, AEW has everyone (except poor Marko) involved in any way in tonight’s main event booked for a 10-man tag match next week on Dynamite. That’s something to look forward to, so as the Inner Circle flips five middle fingers to their foes, we sign off for the night. See you in seven!

Nothing too special tonight, except for the biggest Eddie Kingston fans who must be happy to see him on a stage like this. Overall, tonight’s Dynamite was more of a “put things in motion” than a “pay things off” show, but you need those sometimes too.