Mat Matters: Happily lost in the past

Verne Langdon‘s passing had me going through some old letters that were sent to me when I published The Canadian Wrestling Report. Yes, actual letters, that people took the type to write out or type. Quaint, I know.

But it was fascinating on many levels. I found a bunch of people who I consider friends now that I didn’t remember from my days publishing my newsletter. 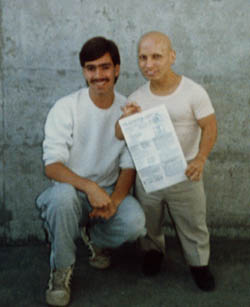 A 17-year-old Greg Oliver and Tiger Jackson in Kitchener at a show at the Central Ontario Exhibition. Courtesy the Greg Oliver Collection

There’s Gary Howard, who went on to write the book, The Rassler From Renfrew, on the Kasaboskis, and who has contributed some of the best articles on the past ever to this website. Mark S. Hewitt is one of the most-respected historians in the business, particularly for the early days of professional wrestling; what did he ever get out of my little ‘zine, I wonder?

Or Larry Dwyer, who was a lower-level wrestler in Dallas in the 1980s, and knew all the big names. Larry loves to travel to the reunions, like the Cauliflower Alley Club or the Pro Wrestling Hall of Fame, and we’ve become friends at these events. But I didn’t realize he was a subscriber.

I got wistful seeing some names that had written to me who are no longer around, like Doug Chevalier of Windsor, who was “Coach” Scott D’Amore’s mentor, or Dr. Don Dawson, an economics professor from McMaster in Hamilton who dabbled in pro wrestling, and co-wrote It’s Only Wrestling. Someone wrote on Neil Carr’s behalf, looking for articles I’d done on Mad Dog Rex; I’ll be at a celebration of Neil’s life in February.

After graduating from Ryerson University with a degree in journalism, I found myself at the Toronto Sun newspaper, and at Canoe.ca when the Sun launched the website. I was able to subsequently hire two former subscribers, Stephen “Nuke” Larouche and John Molinaro. Later, when they left Canoe, as everyone has to, since it has never been a real stable boat, I take pride in their accomplishments — both have had books published.

WCW announcer Christopher Cruise wrote me, looking for info about my newsletter, and helpfully included his resume. How come I didn’t remember this when I sat beside him at a Cauliflower Alley Club dinner, or when he emailed me a couple of weeks back from his new job at Voice of America looking for yet more info? 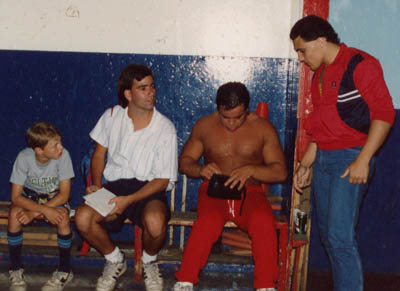 An 18-year-old tanned Greg Oliver interviews Buddy Wayne, as Buddy hunts for a pen — or maybe some change. Photo by Harvey Ring.

I laughed at finding a letter from Portland/B.C. regular Buddy Wayne, who I interviewed in 1989 at an Atlantic Grand Prix show in Bridgewater, Nova Scotia. He was thanking me for writing the story on him, and like most wrestlers, wanted more for free. (I seem to recall that I kept him on the subscription list.) He had just started working for Rocky Della Serra in B.C., as Rocky had taken over Al Tomko’s old territory. More recently, I’m not sure that anyone ever made me laugh harder than he did when he was at the CAC a few years back.

Another was from Ricky Johnson, “The People’s Uncle” and brother of Rocky Johnson. Ricky is a Toronto institution who I met when I was still a teenager. “Thanks for the copy of the ‘Wrestling Report.’ Being a professional wrestler, I, having never seen your ‘Report‘ was naturally skeptical,” reads Johnson’s type-written note from August 1989. “However after actually sitting down and reading your newsletter, I was very pleasantly surprised. I found the articles to be truthful, forthright and very ethical. And obviously not just written by a fan but by one who truly loves this great sport, that I am so proud of.” I still have the autographed photo he sent too, but the memories we’ve shared since, whether the loss of common friends like Dewey Robertson or Bullwhip Danny Johnson, or the Titans in Toronto dinners, mean more than the old publicity still. 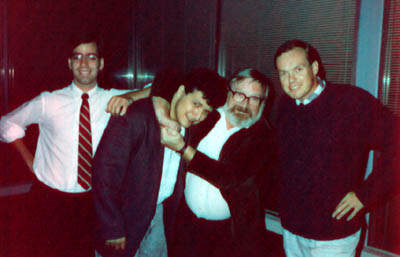 Dr. Don Dawson headlocks somebody, as Greg Oliver, left, and Jim Connolly approve, at a fan convention in Chicago in 1989. Courtesy the Greg Oliver Collection.

For all the letters from people I am still friends with, like Terry Dart, Wes Maidment, Kathie Wilkinson, Steve Whitbread, or Jim “Eddie Oldschool” Connolly, I wonder what happened to many. Norm McEvoy, where are you with your big clunky boots? Don “Howdy” Doody, how are you doing? No doubt, some like George Wilkinson or Harry J. Forest, who shared awesome memories from the past, are not with us any longer.

All in all, it brought back a bunch of memories.

With the current state of the craft of writing, and the preponderance of email and text messages, a pleasant hour spent going through memories like this just won’t be possible in the future. What a shame.

But you know, I never did find any of those letters from Verne Langdon.