I am eternally grateful to Neil Carr, a.k.a. Mad Dog Rex, who died earlier this week, for letting me in to the wrestling world in 1988. To be able to pay him back in 2007 and hook him up with a long-lost daughter was a real reward.

Backing up a bit, I last talked to Neil in September 2010, following up on a letter that I had sent him about the Titans in Toronto 4 fundraising dinner for the Pro Wrestling Hall of Fame. I wanted him there, since he hadn’t been to the previous three dinners.

But he dropped a bomb on me. 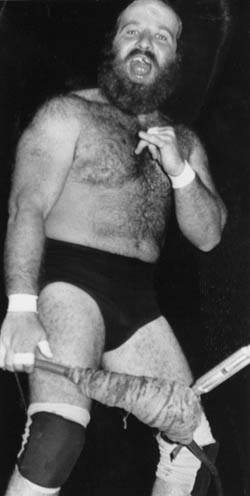 He was off work, suffering from cancer of the esophagus from his years of “smoking and drinking.” At that point, he was scheduled for another CAT, at which point doctors would decide to continue chemotherapy or “rip everything out.”

“My problem is I left mine a little too long, I think. We’ll wait and see,” Carr told me that day.

Well, the results are in.

Yeah, he’s not a name know ’round the world, or even the insular wrestling world. But he was a good guy.

I first got to know Carr in late 1988, and I featured him in the January 1989 edition of my The Canadian Wrestling Report.

He was Mad Dog Rex, 228 pounds, from “Homes and Institutions Around the World,” who had been wrestling a scant three years, after training with Sweet Daddy Siki. On TV, jobbing for the stars of the WWF, he would claim to be “Brantford’s Greatest Athlete.”

“I can play hockey too. Let’s get Gretzky in the ring!” he bragged.

Yet I’m pretty sure the city of Brantford, about an hour and half down the road from Toronto, is not mourning the loss of one of its most famous sons.

His biggest run came out in Al Tomko’s All-Star Wrestling promotion, where he never did lose the Canadian Junior heavyweight belt. “After a while with Tomko, you go nuts,” he told me way back when.

Having blown his chance to cross the border legally, he never became the name he perhaps could have.

The other recent funny story of Mad Dog Rex came from this past April, at the Cauliflower Alley Club reunion in Las Vegas, and I’m in the bar, real late, with “Dirty” Dan Denton and Michelle Starr (Mark Veillous). Somehow, the conversation moves to Rex, and, after I offer a number, Dan insists on calling him despite the really, really late hour, given the time difference — probably 2:30 a.m. in Brantford.

Dan had already told Mark and I a story about Rex being in a bar once, chatting with a girl. Unimpressed by his advances, the girl turned and walked away from Rex. In response, the Mad Dog just spit in her hair.

As they say far too often in wrestling, you can’t make this stuff up.

But back to the positive, I do take a little credit with Neil hooking up with family. An old girlfriend had been in touch, saying that she and Neil had had a daughter together, that he didn’t ever know. I contacted Neil and he said it was okay to hook them up.

And so he got to know his daughter, Jessica — and a granddaughter.

“When Jessica found out that she could possibly get in touch with her father after all these years, she was in tears,” wrote her mother to me.

Another daughter, Tera, had been in touch via email off and on, a newfound technology her dad never embraced. Last I heard, she was working on collecting stories about being the daughter of a wrestler. No doubt the pickings are rich.

But, I’ll give you credit. You were always honest and never worked me.

I can’t say that about all the folks in this twisted world of professional wrestling.