Neil Carr: The pride of Brantford

If you were a wrestling fan in the 1980s in southern Ontario, chances are you knew three famous people from Brantford, Ontario: Alexander Graham Bell, Wayne Gretzky and … Mad Dog Rex (Neil Carr).

Of the three, of course, Carr is the least well-known. But there he was on WWF Maple Leaf Wrestling shows on a regular basis getting kicked around under his real name. And then he made his way to British Columbia, where he made his way up the food chain, to be top dog as the Canadian Junior Heavyweight champion in Al Tomko’s All-Star Wrestling. (Note to Al, Neil still has the belt!) 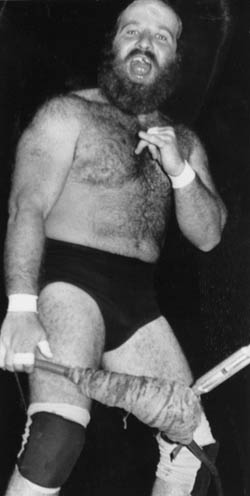 In a 1989 interview with this writer for The Canadian Wrestling Report Carr made his claim at being Brantford’s greatest athlete. “I can play hockey too. Let’s get Gretzky in the ring!” he challenged.

It was a 12-year wrestling career for Carr, who was born February 16, 1959, in Toronto. The 5-foot-9, 227-pound youngster started training to be a wrestler under Ron Hutchison and Sweet Daddy Siki at Sully’s Gym in 1986, and debuted soon thereafter.

His career would take him to many far-off lands, including Singapore, Malaysia, and Puerto Rico, and every U.S. state save Hawaii. Favourite moves included the Russian leg sweep, the neckbreaker, and his “Rexplex” suplex.

“I got to see a lot of things. I wish I’d paid more attention to it,” deadpanned Carr to SLAM! Wrestling. “I wreaked havoc all over. A lot of people remember me from B.C.” Tomko was Tomko, he said. “After a while with Tomko, you go nuts.”

Besides Mad Dog Rex — billed from “Homes and Institutions Around the World” — he worked on occasion as one of the many Mr. X jabronis on WWF dark matches. He was Mr. X in the Maritimes, for promoter Bruce Martin, in 1987. Teaming with Richie Magnett in BC, Oregon and Kansas City, he competed as half of the M&M Connection.

The U.S. stints weren’t exactly on the up-and-up, and he was deported seven times for working illegally in the U.S. “I’m very lucky not to have been put in jail,” admitted Carr. “That kind of held back my career.”

He’s not a fan of today’s wrestling — it “irks” him — but he also has plenty of gripes about the old days too. “Back then, it was a cutthroat business,” he said, full of snitches who’d go running to the promoter. Taking steroids was a fact of life then too, he said.

Today, Carr works construction in Brantford, which he’s been doing for four years. “I’m finally taking pride in Brantford,” he joked. He has four children: three girls and a son. He hasn’t been involved with wrestling for a few years, when he helped Jason Sterling (son of Dewey Robertson) train Val Venis and Squeegee Kid.

His legacy? Carr got to work with the best, in front of both big and small crowds. “I loved being a ham and a showman,” he said, dismissing his negative won-loss record. “We all have our place.”