Last year was quite unique for Daniel Bryan. First, the independent legend was officially introduced to the WWE world via NXT, then brought to the company’s flagship show, Raw, as part of the Nexus. He was then fired, returned to the indie scene, then hired back by WWE and, finally, returned to Raw and gained his first gold — the United States Championship. 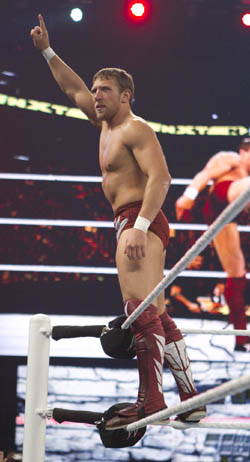 To describe the year as roller coaster would, thus, be an understatement. But Bryan is now firmly established on WWE’s Terra Firma, proudly carrying championship gold around his waist and performing weekly on Monday nights, so firmly, in fact, that it seems like ages ago when Bryan first debuted on WWE TV as part of the NXT competition show.

At that point, Bryan was paired with The Miz playing the role of mentor. This, of course, did not sit well with fans who felt Bryan, better known at the time as Bryan Danielson, had a lot more to teach Mike Mizanin than the former reality TV star did for the hero of the independent scene.

Bryan, however, felt that there was a lot to be learned from Miz.

“I was actually hoping for a little bit of mentoring from him,” Bryan told SLAM! Wrestling in an October 2010 interview, prior to coming to Winnipeg for a WWE house show. “People might be shocked by that, but my weaknesses are his strengths and his weaknesses are my strengths. My weakness has always been that you don’t look at me and say, ‘Oh that guy’s a WWE superstar,’ whereas The Miz carries himself like a superstar and he believes he’s a superstar, whereas I don’t think I’m better than my neighbour.

“Some people believe they’re something special but I believe we’re all the same and just have different skill sets. So something I would’ve liked to have learned more from him on the NXT side is something like, ‘Here’s what you can do when you’re coming out to stand out a bit more.'”

But even before Bryan locked up with Miz and his fellow NXT’ers, he already had a taste of exposure in WWE. Several years ago, dating back to the waning days of the Attitude Era, Bryan was occasionally shown on WWE’s syndicated show Velocity. The Saturday evening show had a format that gave new hires a chance to work with enhancement talent from the independent scene, and alongside names like Low-Ki and Samoa Joe, Bryan wrestled contracted WWE superstars to help them establish their names.

In fact, Bryan was in what is today regarded as one of, if not the most famous of those matches, as he squared off against a fresh-faced (and yellow pants-wearing) John Cena.

Surprisingly, given the positions both men are at in WWE today, the two have yet to sit down and watch the bout together.

“It hasn’t been brought up between the two of us,” Bryan said. “I haven’t seen it in years.”

That’s not to say, though, that Bryan doesn’t remember the bout. In fact, it almost didn’t happen.

“The match was almost scrapped,” Bryan revealed. “That was the night he was going to come out in an interview and do something with Brock Lesnar. He was doing this major, main event thing, so they (WWE’s bookers) were saying, ‘We don’t want him in this Velocity match with an independent guy.'”

Nevertheless, the match did go on and Bryan carries fond memories of it today. “I thought it was a good match and it gets me excited because I know we both progressed in our careers and if we ever got to wrestle again it would be really good.”

The return to WWE

Even though Bryan was brought back to WWE in time for SummerSlam, he continued to work independent dates through the rest of the summer and well into the fall. This was somewhat unique, as more often than not, WWE is protective of their workers appearing on shows for other promotions. Bryan, however, was given a grace period to complete his commitments, something he says the company was fully behind.

“When they called me to bring me back, John Laurenitis, the head of talent relations, was adamant that I try to keep as many of my independent bookings as I could. That kind of took me by surprise. It was really cool because I owe a lot to my independent fans and the promoters who booked me, so it was really cool for them to react that way.” Bryan added that in cases where there were conflicts for shows, the Fed allowed him to re-book dates with the same companies.

Once Bryan was back in the WWE spotlight, fans were treated to one of the most varied and rich movesets in the industry today. One aspect of Bryan’s arsenal changed however, as his traditional finishing maneuver, the Cattle Mutilation (a bridged double armlock with the opponent flat on his stomach), was abandoned in favour of the new LeBell Lock, a Crossface submission akin to the late Chris Benoit’s finisher.

Bryan remarks that the reason for the change had a lot to do with visuals.

“I didn’t really believe the Cattle Mutilation would get over with the WWE Universe, and the reason why is because it’s such a TV-oriented product. There are a lot of downfalls to it. (In the Cattle Mutilation) you can’t see the other guy’s face, and on top of that, it’s very difficult to do it to big guys; I don’t have long arms,” Bryan said with a laugh. “For example Ezekiel Jackson — he’s an enormous guy — there’s no way I’d be able to hook my arms through his arms like that. It was more me — no one mentioned anything to me about it.”

That’s not to say the Cattle Mutilation is completely gone from his arsenal.

“I’ll occasionally throw the Cattle Mutilation out there in places where I think there’s more of the independent fanbase, just as a tribute to them because they’re the people who got me to where I am today.” 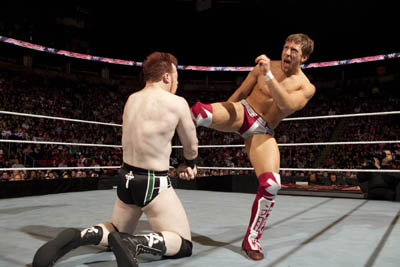 Not surprisingly, because of Bryan’s work on the indy scene, whispers around message boards are hopes that Bryan will now square up with fellow vets from that area, such as Tyson Kidd and Evan Bourne. In particular, during the October interview, Bryan singled out one current WWE superstar who he’d like to work with.

“CM Punk moved over to the Raw brand, so I’m actually hoping that me and him get to feud a little bit,” Bryan said. “We got to wrestle in the independents and we had some really good matches and I think the WWE Universe would be really excited about it.”

Bryan also tabs the former TJ Wilson as another name he’d like to square off with in WWE.

“I’d love to wrestle Tyson Kidd. We tag teamed in New Japan Pro Wrestling back in 2003 and I think we even did a singles match in Budokan Hall in Japan.”

So what about the idea that fans have been throwing out about WWE re-introducing the Cruiserweight division, which would fit the size and style of many of these names?

“I haven’t heard anything about bringing back the division or anything like that, and I’m thankful because that limits you a little bit. I’d rather be able to wrestle everybody than just wrestle guys around my size.”