Verne Langdon, who died on New Year’s Day, was a master of many things, including spooky music, monster masks, and scriptwriting. But as far as wrestling goes, he was a master publicist.

Chances are you haven’t heard of him from his in-ring exploits, but he was able to convince Los Angeles mayor Tom Bradley to declare September 21, 1991 “Slammers Wrestling Gym Day.” 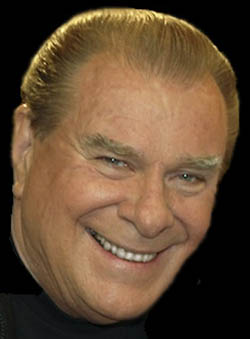 Langdon was a tireless promoter for his Slammers Gym, writing the press, getting articles in newspapers and magazines, and its location in Sun Valley, California, meant that he was available for soundbites, and his gym was there for shoots.

Born September 15, 1941, in Oakland, California, it was music that ran in Langdon’s family. According to his website, “his mother was staff First Cellist with NBC radio in San Francisco, his father played violin, and to complete the musical history, Verne’s uncle was famed jazz cornetist, bandleader Ernest Loring “Red” Nichols (Red Nichols and The Five Pennies).”

The 6-foot-2, 266-pound Langdon was an amateur wrestler from sixth grade until freshman year at San Jose State College, a real contrast from his classical piano studies. The interest in pro wrestling came from his father’s friendship with Gorgeous George (George Wagner).

At San Jose, Langdon played football, and had a radio show that included wrestling; he graduated with a major in English literature and a minor in radio-television.

It was Ramon Torres who got him started wrestling, but Fabulous Moolah and George Drake were his primary trainers. “I also knew and worked out with a lot of pros,” Langdon said in a 1994 interview with Billie Jessee in the Wrestling Then & Now newsletter. “A lot of times, if your teacher doesn’t have a name or one they’ve heard of, they think they are probably not a good teacher. Big names and known wrestlers doesn’t (sic) necessarily make good teachers.”

His beginnings would describe his future too. Never a major name on any circuit, he would emerge from his Hollywood days heading one of the most notable wrestling gyms — and museums — in the country. Langdon produced videos on training for professional wrestling, using his connections in the movie business to produce slick products.

What was Slammers? “Well, it’s the world’s first and only place of its kind where people who love to wrestle can come and do it!” Langdon told WT&N. “You rent a regulation wrestling ring, or Olympic-size mat and get down! Beyond this, however, Slammers is where you learn how to wrestle professionally at Slam U, our University of Professional Wrestling, where we teach you the ‘A to Z’s’ of the Sport, and yes, to us, Professional Wrestling is just that — a sport.”

The gym also hosted Langdon’s Slammers World Wrestling Museum & Hall of Fame Archives, a rich collection of wrestling history that had a whack of photographs, programs, posters, videos, actual ring-worn attire, and other artefacts. Most notable was his Gorgeous George goodies, and the gold life mask of “The Super Swedish Angel” Tor Johnson.

In a 2005 article by Jonathan Barber about the violent California-based Xtreme Pro Wrestling promotion at Declaration of Independents, where a number of his students worked, Langdon addressed his legacy: “[Slammers] didn’t turn out a great quantity of students, but those who went on to other federations knew their stuff,” he said, continuing later in the story. “We never promised any student he would ‘see the world’ and ‘earn millions of dollars in wrestling.'”

“Beautiful” Bruce Beaudine is the wrestler/referee who went on to the biggest success, but that was behind the scenes as WWF and WCW scriptwriter Ed Ferrera. Others who made minor names for themselves include “White Trash” Johnny Webb, Ashley Hudson, Homeless Jimmy (James Jaafil) and The Messiah (Billy Welch). Carlito Montana (Carlos Torres) and El Toro Bravo were trainers. 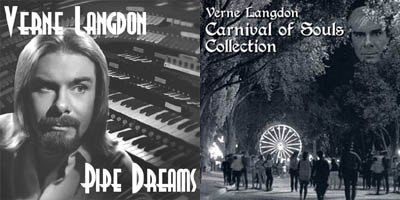 Two of Langdon’s many albums.

Away from the ring, Langdon made monster masks for a number of films and TV shows, including Outer Limits and Alfred Hitchcock Presents. He also was a makeup artist on the original Planet of the Apes films and TV series. On the radio, he hosted the Coca Cola Hifi Club and Langdon After Dark on KLOK-AM in the early 1960s, based out of the San Francisco Bay Area. He also helped created attractions at Universal Studios, like Castle Dracula, and Land of a Thousand Faces.

Musically, he wrote, produced and appeared on dozens of CDs, LPs and singles, “ranging from theatre organ to harpsichord, comedy to calliope.”

El Toro Bravo talked about Langdon in a blog posting. “Verne was a jack of all trades and a master of all of them. An accomplished musician, the man could romance you with his piano playing, and make you laugh with his vaudevillian beats! When he sat down to play you a song, he would compose a masterpiece out of thin air. One of my guilty pleasures in life, was having him call me every year for my birthday, and sing ‘happy birthday’ to me over the phone with his piano accompanying him in the background. I’m sad that those calls will never be anymore.”

Greg Oliver exchanged many letters with Verne Langdon in the late 1980s, while published his Canadian Wrestling Report. (Back issues are still available!)