In the Maritimes, he was known as the Kowboy of the now defunct Real Action Wrestling (RAW) promotion. Now, he’s the Hangman, battling it out in the ring wars of Puerto Rico.

What has not changed for Mike Hughes is his commitment to professional wrestling.

The last time SLAM! Wrestling spoke with Hughes, he was active with RAW, based in Canada’s maritime provinces of Nova Scotia, New Brunswick and Prince Edward Island. With a full touring schedule and prospects of a television deal, prosperity for all involved seemed to be in reach; until the all too typical fate of would-be wrestling companies came to pass. 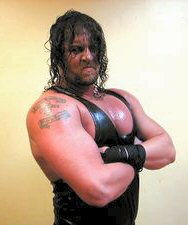 “In my opinion, RAW closed for a few reasons,” recalled Hughes, a native of Stratford, Prince Edward Island. “Poor promoting and a failure to listen to those who had the best interest of the company. They got caught up in some old-timer’s sales pitch and because they were fans of the old-timers, they got hooked.”

“Bobby Bass was one in particular,” he went on to say. “He owned a percentage of RAW and then ran against them with a new promotion the next year. When Bass opened his new promotion, he promised the top talent a lot more money and because of this, the RAW roster split. It watered down both shows talent wise and the fans ended up not supporting either.”

Throw in inflated egos from both the promotional side and the locker room, and the inevitable downfall occurred. “One promoter — there were three for RAW — actually thought he was going to go head to head with Vince (McMahon). In the end, these things, along with money, were the downfall of a great promotion,” Hughes added.

The RAW promotion closed down in 2001, leaving behind a bleak wrestling landscape in eastern Canada.

“The indy circuit was awful after RAW closed,” Hughes said. “Fans were used to a certain quality of wrestling and when some smaller guys who were half trained and couldn’t get booked anywhere else opened a promotion, a lot of fans felt betrayed and stopped supporting indy wrestling.”

With that stark assessment, the veteran Hughes set out to find his wrestling fortunes elsewhere. His first stop was England, working for the All Star Wrestling in January of 2002.

“My tag partner and best friend Kingman (real name Peter Smith) lined this up for me. I was there off and on for over a year. I would do four, five month tours, return home for a couple of months, then back for three, four months. England is a great place to stay busy working five days a week and the wrestlers there are the most technical in the world.”

Hughes praised Kingman for helping him get to England, a rare act of camaraderie in a business where looking out for number one reigns. “I can honestly say Peter is the only person who ever helped me in this business get booked. He’s a true friend. Joe E. Legend is another who tries to help me also. I’ve helped probably between 15 to 20 guys get booked in places and not one of them has ever offered to return the favour. That’s the business I guess, though.”

It was during his tour of All Star Wrestling that Hughes got the call to go work for International Wrestling Association (IWA) in Puerto Rico. “I got a call from Luke Williams (one half of the famed Bushwackers of the WWE) while I was in England, asking if I was interested in coming down for a while, maybe two months. I told him when I was done in England, I would be there. He has one of the best wrestling minds in the world and is one of the most decent guys I know. I’m proud to call him a friend and have learned a lot from him as well,” Hughes said.

Two months would turn into six months, with Hughes battling some of the major stars of the IWA promotion. “I started in Puerto Rico in April 2004 and immediately began feuding with Apolo for about three months. The feud was hot down here. Apolo and I did dog collar matches, Texas death matches; we shed a lot of blood together.”

“I then began feuding with Ricky Banderas for the next three months of a pure war. I have a lot of respect for Ricky; we kicked the crap out of one another and we both loved every minute of it. There are guys in this business who complain a lot. Ricky is not one of them. We always knew when we hurt each other because a little smile would start and it just got more and more physical. The fans just loved it. Anyone who says wrestling is all fake hasn’t seen a Ricky Banderas versus Hangman Hughes match. I have the scars to prove it.”

Having made the all too important impression, Hughes was asked to come back during a brief return to Canada for the Christmas season.

“They called again over Christmas and asked if I would come back in January and I agreed. The office has put me up in a nice condo with a pool, gym next door and a three minute drive to the beach. We work from Thursday to Sunday and then have three days off. The office has also provided a minivan for the boys and I. I must say, they treat me very well here, pay and other wise. I really enjoy everything about the Spanish culture here.”

Puerto Rico is looked upon as the last of the wrestling territories. With a population of nearly four million, the island has a well earned reputation of being an anomaly, where fans still remain ferociously loyal to their unique brand of professional wrestling.

“The fans here are the best in the world, hands down, the loudest and most appreciative,” proclaimed Hughes, who currently holds the IWA Hardcore title. “Every punch gets a response, with no arm chair wrestlers criticizing. Just a treat to wrestle in front of them; the houses are huge too, between 2,000 to 10,000 people depending on the town.”

Only adding to his success there is his positive relationship with IWA owner, Victor Quinones.

“Victor Quinones has always treated me with the utmost respect,” said Hughes. “Others have said some things that are negative about him, but I can honestly say he has always been straight with me, whether it’s money or otherwise; one of the few promoters who are true to their word.”

Hughes also paid tribute to fellow Canadian wrestling star Shane Sewell, a long-time veteran of the ring wars on the island. “I put Shane Sewell as one of the top five in the world, WWE included,” Hughes said emphatically. “He is absolutely amazing, both in the ring and a human being. Shane and I are tag partners right now and I feel we have good chemistry. How Vince (McMahon) let this guy slip by I don’t know. I’ve learned a lot from Shane, inside and outside of the ring about Puerto Rican wrestling.”

He has achieved what many of his peers would envy; making a full-time living at professional wrestling. Although conscious of this, Hughes admitted that the rigors of the business can spark thoughts of walking away.

“Sometimes it’s better to walk away, everyone knows when it’s their time to go,” he said. “In this job, there are so many ups and downs, most wrestlers, me included, contemplate quitting about once or twice a month. If you love it and it’s in your blood and you can make a decent or good living, you usually stay.”

Be assured, that is exactly what Hughes intends to do.

“I’ll be back in forth to Puerto Rico as long as they’ll have me. So far, things are good.”