“We get hurt, we get injured. Everybody does. From concussions to broken bones, torn ligaments, torn muscles — we’ve experienced it all,” said “Kowboy” Mike Hughes in a new TV series called Wrestling Reality. “Sure we know how to keep ourselves from getting injured but we get hurt every night. There’s a big difference between getting hurt and being injured — neither one of them feels real nice — just one means you can work the next day, the other means you can’t.”

The Fight Network gave viewers a sneak-peak at the show September 25, airing a half hour of documentary footage taken of a pro wrestling tour through six Atlantic Canada towns and cities in seven days in May. The full six 90-minute episodes begin broadcasting November 6.

Krista Hanakowski (a.k.a. Krysta Lynn Scott) felt there could be no bigger insult than being told wrestling is fake. Those who say it is probably couldn’t take a half hour of the punishment she does, she said.

And for any fans who want to enter the ring as a performer, Hughes spoke of his Halifax wrestling school and described how tough and physically fit his students needed to be to hold up to the rigours of the mat. Those on the tour demonstrated just how religiously they worked out. Can’t find a gym on the road? Improvise — especially on fight night. 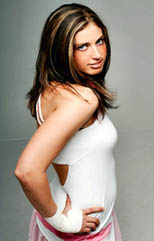 The documentary takes viewers behind the curtained wall separating fans from the inner sanctum of the pro wrestling locker room. The veterans of the group, the giant Peter Smith (a.k.a. Brody Steele) and muscle-bound Williams stood telling their charges what they expected of them that night: Don’t tell a story to yourselves or the guys in the locker room. Instead, relate everything you do to the fans and make sure you get a reaction out of them.

“We do this because we don’t want to work for a fucking living. So let’s go out and have fun,” Smith emphasized.

Following the show, the performers returned backstage, some winded, some hobbled, one bleeding. Some were disappointed, others ecstatic with their matches.

Smith expressed some displeasure with the first live event but reminded himself, “It’s only a start.”

Trying to unwind back in a local bar, the boys could find no peace of mind as a beer bellied grizzled drunk made repeated attempts to provoke them into a fight, and even went so far as to remove his shirt to intimidate them with his flabby physique. The wrestlers, however, simply chuckled quietly and otherwise ignored the would-be bully. They’d all been there before.