Topps WWE Action lives up to its name

Those who are experienced card collectors know that every so often a set comes out that becomes the benchmark by which all other sets are judged. It is so evolutionary in concept and execution that a company cannot help but strive to replicate its success, or top it.

Topps is no stranger to this. Look through their sports lines and you’ll see the emergence of stand-out products that, whether intended to or not, changed the way that the hobby viewed sets that followed it. From the extensive checklists of Topps Total to the ultra vintage Topps T206, the New York-based company has made a number of history-altering products that stay in collections for years.

Such is the case with Topps’ latest WWE release, Action. Featuring seven cards per pack, Topps once again ensures that collectors will get a base set out of their 24 pack-box, and it is a set you will definitely want to pursue.

Whereas past Topps releases primarily featured headshots or PR photos, Action is all about match photography. There are some absolutely beautiful pictures here, for which both the WWE photography team and Topps should be applauded.

Easily one of my favourites from the set is Edge’s card, which, as you can see, shows the Canuck setting up for his spear. Whoever shot that photo deserves a raise, because the intensity in Mr. Copeland’s eyes is picked up perfectly. Another standout is Jeff Hardy’s card, which shows the daredevil soaring through the air en route to a Swanton Bomb. 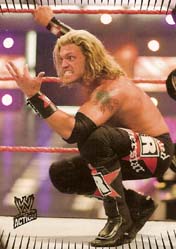 Edge gets set for a spear in Topps WWE Action.

Interestingly, the identity of the featured wrestler is saved for the back of the card, a practice rarely seen in the hobby world. In actuality, it’s a great move by Topps as it allows for a better presentation of the card, with more room dedicated to the full photo. The little bit of detailing on the front (gold foil logo and spike effects) doesn’t hamper the design whatsoever, and leaves the collector with a presentation-worthy image that is also very suitable for in-person autographs.

An interesting part of the base set is a series of WrestleMania recap cards, detailing most of the matches that took place earlier this year. Again, the photography here is stunning, especially the McMahon shaving cards. It’s too bad that Donald Trump couldn’t be in the images, but you get the full effect in any case.

Speaking of signatures, they are once again part of the product, along with event-used items (again, mainly shirts and mats; sigh). Some pictures from the base set are primarily re-used here, but are touched up a bit. The Jeff Hardy signature we pulled, for example, has all colour removed around the high flyer. That’s the good part of the piece. The bad part, unfortunately, is Hardy’s signature, which more so resembles a piece of his tattoo than his name. Compare this to the Mickie James or Edge sigs we have from the past, and the “Charismatic Enigma” sits pretty low on the totem pole.

Alas, the event-used cards do not follow the same pattern, and instead return to the photoshoot pics, which have been around since the product’s inception.

The only thing that is truly missing from this set is a strong insert in the hobby edition. Retail buyers, however, are treated to lenticular motion cards, which capture a few frames of action that can be viewed by tilting the cards. It’s my sincere hope that these cards get the traffic they deserve, because the technology (which has actually been around for 20-odd years) is truly unique and really works for this type of set. The other insert in store packs are rub-on tattoos, which will naturally appeal to the kiddies today.

As I said in the beginning of the review, Topps has now set a standard for its sets. No longer should we see the same photoshoot pictures on Topps sets. Congratulations Topps for going away from the standard appearance of the cards and making something unique. I look forward to seeing what you have for your next set.

Stay tuned for details on how you can win a box of Topps WWE Action.