Cage DVD worth it for extras

Christian Cage’s nearly two-year run with TNA is documented in a new DVD, Christian Cage: The Instant Classic. And while the eight full matches on the disc are bouts we’ve all seen, it’s the extras that make this purchase a no-brainer.

The best part of this DVD? The one-hour interview with Cage. It might sound drab, but the subjects that he talks about (childhood, meeting Adam “Edge” Copeland and Rhino, how he got into wrestling, why he chose to come to TNA) are intriguing. 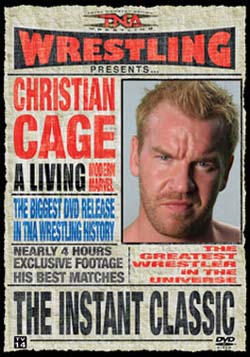 For instance, who knew that he was born in Kitchener, moved to Huntsville, then to Grand Valley and ultimately to Orangeville? And who knew that his father is American and his mom is Canadian? Not me — and that’s why I like this DVD. It’s not just a compilation of his best TNA matches. You actually learn a thing or two about “The Instant Classic.”

Another part I liked was when Cage talked about how his parents wouldn’t let him miss hockey practice on Saturday mornings, so they would tape wrestling for him and he would hurry home from the rink to watch it when he arrived home. Hockey. Canada. Who knew?

A bonus match of Cage versus Lance (Simon) Diamond (with Dawn Marie) from a Pennsylvania Wrestling Federation show back in the early 1990s is a top-notch extra if you’re an independent wrestling fan or if you want to see Cage and Diamond in their early 20s. Cage and Diamond also provide commentary and throw out some names they worked with back then.

“I wanted it on the DVD,” Cage said of the early footage. “You can see the progression of what it actually takes to become, what you have to do to evolve and become a force in the business and compete at the top level, and how much work it actually takes, that you just can’t step in the ring and be at the top right away; it’s an actual progression and you have to learn every single time that you step in the ring.”

Another one of the bonus features was his first-ever interview.

“It was brutal,” recalled Cage of the Suicide Blondes interview with Copeland. “It’s a brutal interview. When I watch it I cringe. But it’s something that’s on there, that you can see, as far as my mic skills are now compared to where they were when I first broke it. I was all for having it on there.”

Cage also takes the viewer on a tour of his pad down in Tampa and yes, it is the same one Abyss mauled him in about 18 months ago. Make sure to check out Cage’s “dance studio” and his take on a certain salad dressing. Hilarious stuff.

A photo gallery is the other feature.

As for the matches portion, each one is, or is close to, a four-star match, yet some may argue that.

The eight matches included on the DVD:

Cage said he was sent a list of matches that TNA wanted on the DVD and asked his thoughts.

“I sent them back, ‘Well, maybe not this one, but this one,'” he said. “For for the most part, they had it nailed, what matches I would have put on there. There were a couple we slid in and a couple we slid out. It was a mutual thing.”

All in all, at the end of the day, I HIGHLY recommend adding this DVD to your collection. This is probably the best “Best Of” DVD that TNA has produced since they entered the DVD market.