Steen believes in goals, not dreams

This past February 19th, such a dream became true for him as he made his debut for Ring of honor (ROH) during their Do or Die 4 show, and on March 15th he will be making his debut in Japan for Zero One at the famed Korakuen Hall in Tokyo and on March 12th in City of Industry in California, for the PWG in a four-way match against El Generico, A.J. Styles and Christopher Daniels.

Steen’s ascension to the top ranks of indy wrestling should come as no surprise to those familiar with his November 6, 2004 match in Elite Wrestling Revolution (EWR) in Quebec City where he faced Steve Corino, the “King of Old School.” Corino was so impressed by Steen’s ability that he promised him he would be wrestling world wide in the next few months under his tutelage, but particularly in Japan. 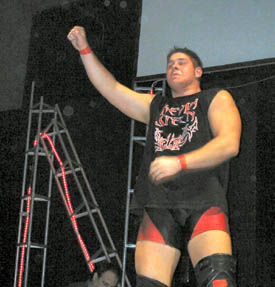 It all began when Steen’s father, a big wrestling fan, rented a copy of Wrestlemania 11 and although the featured attraction was a bout between Bam Bam Bigelow and Lawrence Taylor, former NFL great with the New York Giants, it was the Diesel (Kevin Nash) versus “The Heartbreak Kid” Shawn Michaels match that caught Steen’s attention.

“At the beginning of the cassette, I was saying to myself that wrestling was so stupid, but when I saw the match between Nash and HBK, I flipped out and was hooked on wrestling and I have been since,” said Steen. He was 11 years old then, but knew in his heart he wanted to go to a wrestling school.

His parents believed he was too young, so, when he turned 14, and after three years of constant nagging, his parents finally agreed to allow him to take lessons as soon as they found a reputable teacher.

He started taking wrestling lessons with Serge Jodoin, a Quebec-based wrestler who wrestled abroad on a few occasions. Steen was Jodoin’s only student at that time, tutoring him right out of a barn close to Steen’s Marieville home on the south shore of Montréal.

It was in a badly used ring with loose cables that Steen learned the basics of pro wrestling. But after only one month, the owner announced his intention to develop the land the barn was located on. Soon afterwards, the barn was demolished and with it, the wrestling classes.

For one full year, Steen stayed away from wrestling as he couldn’t find a wrestling school who would take him at such a young age. In September of 1999, Jacques Rougeau Jr. opened his wrestling school. Knowing Rougeau from his WWF and WCW wrestling career, Steen figured that he would be the best bet for a competent wrestling training. After meeting with Rougeau, he decided to join his wrestling school and became his second student.

The training was on Thursday and Friday evenings, along with Saturday mornings at a flea market in the north portion of Montreal. His first match was May 7, 2000 in L’Assomption, a small town just east of Montreal.

After training with Rougeau for four years and wrestling every four or five months, Kevin decided to leave Rougeau. He felt he needed to wrestle more often.

“I didn’t want to leave Jacques’ school, but I wanted to wrestle much more often than once every four or five months with Jacques, and because he didn’t want his students to wrestle with other federations for reasons only known to him,” Steen recalled.

“So he told me he had good news bad news for me; he would guarantee me a dark match on WWE’s Raw, but only if I signed a five-year exclusivity contract. I could not accept that, especially when (Pierre Carl) Ouellet had left Rougeau because of his infrequent wrestling galas, that’s when I decided to leave him.”

In December 2003, Rougeau addressed Steen’s departure in a story on SLAM! Wrestling. “It’s his prerogative. I respect him for that. If he wants to do that, that’s okay. Maybe it’s the way he did some things that wasn’t right. He’s young. I was young too,” said Rougeau.

Although Steen learned the basics from Serge Jodoin, it was Rougeau who first showed him the psychology of the sport. But it was former WWE tag team champion Ouellet that showed Steen the ropes, with a one-on-one teacher/student relationship on ring techniques. This continued every week, alongside veteran wrestler Eric Mastrocola, who made a brief appearance for the WWE in a match on Heat in 2004.

Steen would combine the training along with moves he saw on television, and use them in his matches. “When I see a move I like, or find exciting, I record the show, and try to duplicate the move or even modify it to my liking,” Steen said.

After wrestling for the International Wrestling Syndicate (IWS) in Montreal, the EWR and Championship Professional Wrestling (CPW) in Hull/Gatineau for the last few years, it was time for Steen to be exposed to international talent. In April 2004, Steen got his chance when he wrestled “The Fallen Angel” Christopher Daniels in EWR, followed by going against Samoa Joe at Mid Summer Madness in July and against Corino in November. Not long after, Steen made his debut with for Jersey All Pro Wrestling (JAPW) and Combat Zone Wrestling (CZW), further driving his thirst for more international exposure.

His three-day training camp at Ohio Valley Wrestling (a WWE-affiliated promotion) had a huge impact, and Steen believes it gave him more insight into the wrestling game. “Even though I was at OVW only three days, I learned more in that time frame than all my time with Rougeau,” he said.

Although he is a really big fan of “The Heartbreak Kid” Shawn Michaels, his favorite is Steve Austin, especially his first character in the WWF, the Ringmaster. “I love the way he is in and out of the ring, but his character and the seriousness he gives it.”

Mirroring that same intensity Austin displayed with that early character would pay off by making an impression on Corino.

On Corino’s website, he wrote a whole article on his meeting with Steen. “In Quebec City, I was against Kevin Steen. I have heard and read about Kevin for the last few months and everyone was putting him over as the next big thing. Now I have been around long enough to know that most next big things are either just wrestlers that end up believing their own hype and fizzling out or they just write the hype about themselves (see any Pro Wrestling Illustrated family magazine). I fully expected Kevin to be the first one. But once I met him and talked with him for a while I realized that this kid has a good mind for wrestling and then we got in there and wrestled for about 30 minutes and he was as good, maybe even better, than people have been saying. I think he might only be 20 or 21 but this kid has a huge future. I definitely think he would be a perfect fit for ROH or Zero One in Japan.”

Although the WWE might look like the preferred company to work for, Steen sees it differently. “For sure I would like to make it to the WWE, because let’s face it, it is the granddad of wrestling federations. But I also know that to make it to the top, my career will take me through other very interesting federations in North America and Japan too.”

But what makes Kevin Steen one of the best young wrestlers in Quebec? Most fans will say his in-ring abilities are second to none. He’s both a high flyer and a master with technical abilities; others will tell you his Randy Orton-like cockiness is one of the best around.

When SLAM! Wrestling first talked to Kevin Steen back in 2000, his first year wrestling, he then told all that would listen that he was shooting for the top. And after five years of slowly making it up the experience ladder, he remains confident he will make it to the top because of his determination.

“What makes me different than other Quebec wrestlers is if I know I will make it to the top, it isn’t a dream, it is a goal.”