Are We There Yet? doesn’t quite get there

The latest literary offering from the WWE, Are We There Yet?, Tales From the Never-Ending Travels of WWE Superstars, is a victim of two things: Political correctness and the demise of kayfabe. Consider it a case of what could have been. 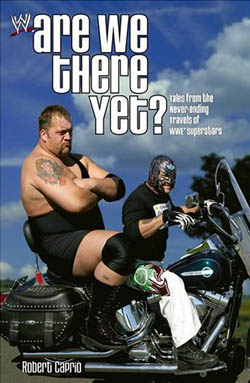 In my 20 years of writing about wrestling, I’ve heard some damn good road stories. Inevitably, they involve alcohol, sex or crazy pranks (sometimes all at once).

Compound those with the frightening tales of fans taking the whole sport WAY too seriously — slashing tires, stabbing wrestlers, harassing family members — and you’d have an accurate portrayal of the way wrestling used to be.

And that’s not to knock Are We There Yet? It’s a good book — fun, well-written and entertaining, with some unique photos to boot. But it’s a product of the times, and the times are, unfortunately, comprised of a bland, one-company wrestling universe where the wrestlers seem interchangeable from day to day. Indeed, a number of the people interviewed for this book (Dr. Tom Prichard, Goldberg, Jazz, A-Train) no longer work for the WWE, replaced by other wannabes. (The departed Rico’s story about a plane ride from hell that forced him to use his police officer training is probably the best tale in the entire tome.)

I can remember a lunch I had a while back with Billy Red Lyons and super fan Terry Dart. They were talking about the rough times on the road, and how the wrestlers from the past had it so much harder. I disagreed. The times are just different today. Taking a plane from city to city is taxing on the body in a wholly different way than driving. Are We There Yet? dips its foot into the past, but is mostly about the current lifestyle of its superstars.

The most enjoyable stories in the book are from those who have hit the roads for a long time. Sergeant Slaughter, Jerry Brisco, Al Snow, Dean Malenko, Tom Prichard and Jim Ross have done the extended drives in the territories, when the fans were ravenous for the heels’ blood, but would settle for destroying their cars. How can anything that Chris Nowinski or Victoria have ever done truly compare? It can’t. It’s comparing apples to oranges.

Missing, perhaps for obvious reasons, are the tales of drinking, sex and partying. There are no stories of arrests kept hush-hush by the WWE P.R. people. But we get Randy Orton bragging about the stuff he gets for free ’cause he’s a celebrity and Mark Henry’s rating of strip clubs. In an attempt to be both humorous and edgy, we also get stories of The Big Show’s bowel movements.

In the end, if you are comfortable with the way wrestling is today and like the personalities, Are We There Yet? gives great insight into the wrestlers and announcers today — trips to tourist traps, three divas in a bed, separation from families, rental car problems.

But if you’re looking for any sort of accurate portrayal of the way it used to be, it’s a frustrating read. How about a second edition, just with stories from the WWE Hall of Famers?