Keep your eyes peeled for a new wrestling series that documents the struggles of earning a living and achieving recognition on the indy circuit, all the while maintaining family and friendships.

Kardinal Sinners, a Canadian East Coast production that premiers April 27 on the RUSH HD specialty channel, follows a troop of heels wrestling on a six-date tour from Cape Breton to Ottawa. 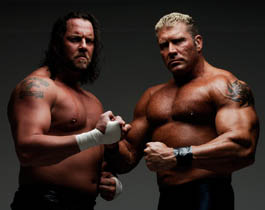 In some respects, the show contains the elements of some cynical war movie, where the veterans return home after the fighting has stopped only to find no hero’s homecoming awaits them. Instead, they are treated almost like pariahs as they are ignored and forced to struggle to survive. With Kardinal Sinners, the protagonists of Wrestling Reality are floored to discover that their greatest triumph — their successful series that aired on The Fight Network — brought only fleeting fame and notoriety.

They had reason to believe they had launched their careers to new heights, given Smith’s appearance on TSN’s Off The Record, the boys being interviewed on Entertainment Tonight, and talk of a second season. But when the latter never came to fruition, hopes sagged. After waiting a year for a second season that never came, Gallant and Doyle, fed up, quit the business altogether, while Smith and Hughes continued wrestling as the “Kardinal Sinners,” albeit mostly abroad.

The series picks up with producer Greg Hemmings launching a new tour and documentary-drama and Smith and Hughes trying to convince a reluctant Gallant and Doyle to join them for one final shot at greatness. This new journey, however, seems a much more tumultuous one, as the passion, excitement and dreams of stardom that ended the first series are replaced with pessimism and anger. Tensions threaten to derail the project and the bonds of friendship are strained to the breaking point.

The series offers physicality and real, true-to-life plots and emotions, with personal profiles giving viewers an insider’s look at the lives of these apparently indestructible he-men who are in fact vulnerable and all too human outside of the ring.