Puerto Rico is quite the battleground these days. Two promotions are duking it out for pro wrestling supremacy on the tropical island, and numerous other indies are trying to muscle their way in.

The biggie is the well-established World Wrestling Council (WWC), which has been around since 1974 and likely known to North American fans for the bloody battles of Carlos Colon against the likes of Abdullah the Butcher and Bruiser Brody. 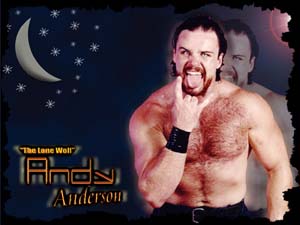 The relative newcomer is the WWF-affiliated International Wrestling Association (IWA), and it’s here that Canadian Andy Anderson, aka ‘The Lone Wolf’ has been deeply entrenched.

The Winnipeg-born Anderson has been in the IWA since it started, and is proud of that fact.

“It’s grown a lot in a year and a half. I’m very proud to have been here from day one,” he told SLAM! Wrestling from Puerto Rico. “You can see, especially if you watch the TV shows or just talking with the fans, when we started it was like a brand new baby. There was a lot of feeling out processes.”

Anderson credits part of the success of the IWA to experienced, behind-the-scenes veterans like Victor Quinones, Savio Vega and Dutch Mantell.

The IWA, WWC (often referred to as Capital Sports) and the Borinquen Wrestling Association all have TV shows in Puerto Rico.

Like the early days of WCW competing against the WWF for prime time audiences, TV share for wrestling in Puerto Rico has increased for everybody because of the competition.

Puerto Rico wrestling expert Manuel O. González of PRWrestling.com explained the changes in the TV product over the years. “WWC TV shows have been classic interviews-and-matches shows, but for about a couple of years now, they have introduced TV angles to make the people interested in the product. Ratings have been increasing for WWC since IWA entered to compete, ironically. IWA TV shows are more orientated to young people, something I call Cable TV fans, who are familiar with the WWF product, with lot of talk, angles and not too much wrestling at all.”

Anderson gives WWC its due. “Capital’s Capital. If you take a look at the TV ratings, they still beat us on TV ratings every week by a couple of points,” he said, adding that WWC has “been on the same timeslot, same channel for 25 years so you get the tradition.”

The ‘Lone Wolf’ Anderson said that the workrate has improved in the IWA, and the evolution of characters gets better all the time as they all get more comfortable on TV. Through trial and error, the promotion realized that the best night to tape TV was Saturdays at the big shows. Live shows generally run Thursday to Sunday, with some TV taping done on Fridays.

The talent is young and hungry, said Anderson. “A lot of people put over our talent because we’ve got younger talent, we’ve got better conditioned talent, our storylines are, for the most part, fresher. With them, they’ve got a lot of the older guys. I don’t want to knock their talent, because they do have some good talent, but I guess it’s just a matter of what you’re looking for and what you prefer.”

According to González, the 26-year-old Anderson is one of the young guns in the promotion with a loyal following. “Although being a mid carder guy, Andy created a group of loyal fans known as his tag team, Los Hijos del Pecado (Son of Sins – SOS) with Chicago based wrestler Bret Sanders, who changed his style and gimmick to a vampire like characted named Vyzago, although the gimmick (vampire) was slowed down but not the name. They were tag team champions for four months and he previously had the strap with Steve Bradley and Headhunter 2. He was also Jr. champ for two months… so saying he was a mid card wrestler all the time can’t be so true as he had a decent push and at a time had a great fan base.”

Being a heel is great fun for Anderson. “I’m proud to say that I’ve been the only heel who has been a heel since day one. A lot of the heels have been babyfaces at some point.”

González credits Anderson’s charisma. “Contrary to usual WWC fans, the IWA fans are like WWF fans, cheering [for] who ever they like. He [was] great … doing the SOS team and he was the one who basically ran the team, so [besides] being hated by the common fans, he was well loved by young female fans, to the point that they created a fan club to compete with others, like the Chicky Starr club called ‘chickystarianos’. Being a great worker who liked to show what he can give makes him one of the best talent (probably underrated talent) in the IWA.”

Anderson believes that too much is made of the WWF affiliation with the promotion. A recent tour had Big Show, Crash Holly, Godfather, DDP, Test on it, and former WWF regulars like Tiger Ali Singh and the recently-retired Savio Vega are there as well.

“I think at the start, it helped give us some credibility to be associated with [the WWF],” he said. “You can’t really do any angles with these guys. They come in for one weekend, it’s tough to really do anything.”

Besides his time in Puerto Rico, Anderson also just did a tour with Battlearts in Japan and hopes to go to Mexico. He also did dark matches on a recent WWF tour through Philadelphia and Washington along with fellow Canadian-in-Puerto Rico, Shane ‘Glamour Boy’ Sewell.

So far this year, Anderson has only been to his Edmonton home once. He misses everything from his house, to his parents, his friends, his dog, his cats, his car, and the Canadian air.

It’s never cool in Puerto Rico. “The heat, while at the same time I love it, it kills me. I sweat very easily and with the humidity here, there’s some days — especially with some of the buildings not air conditioned, there’s not a lot of air circulation — it just kills me.”

In Puerto Rico, Anderson has an apartment with some other wrestlers. “If there’s space, and there’s guys coming in, if we can fit them in there and whatnot, then they’re in there. At times, we can become the home for wayward wrestlers.”