Andy Anderson has only been wrestling for three years, but in that short time he’s managed to travel and see the world. Since his 1997 debut, Anderson has wrestled in Canada, the Southern United States, Mexico and Puerto Rico, where he is currently wrestling for the International Wrestling Association. Now, the 24-year old Winnipeg native is ready to make a splash in Japan.

“I’m going on a five-week tour for the Battlearts promotion and I’ll be working out in their dojo,” Anderson recently told SLAM! Wrestling. “(While I’m there), I hope to get some bookings with other promotions like Big Japan Pro Wrestling, Michinoku Pro and F.M.W.” 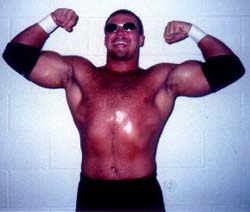 Anderson sees the trip to Japan as an opportunity to improve his craft and follow in the footsteps of his wrestling hero.

“I’m a big Chris Benoit mark,” admitted Anderson. “Benoit is the man and I want to be like him and be able to work any style. Japan was where he learned to work his style and developed into the wrestler he has become. I want to go to Japan and make sure I’ve got my game down.”

Trained by fellow Canadian Vance Nevada, Anderson had his first match in June of 1997 against Robbie Royce. After working for a month in Manitoba, Anderson made his way down to the Southern United States for a few weeks before returning to Manitoba.

Anderson came back to Canada and caught a break while he was working a show that veteran woman’s wrestler Debbie Combs appeared on.

“She said I looked good and recommended me to Terry Taylor, (WCW talent-coordinator at the time).”

WCW flew Anderson to San Diego in October of ’97 where he worked a Nitro dark match against Saturn. The following day at a Saturday Night taping in San Bernadino, Calif., he worked with Gedo, star of the Japanese WAR promotion (fans might remember Gedo from his match against Chris Jericho at the 1997 Halloween Havoc PPV).

“JJ Dillon told me that I looked pretty good and Taylor said he’d get back to me in two or three weeks but he never did.”

In the meantime, Tennessee promoter Bert Prentice brought him to Nashville where he worked for the Music City Wrestling promotion and several other Southern independents. It was during this stint down south that Anderson was able to really cut his teeth.

“I worked for Music City Wrestling for six months as Buff Anderson, and I worked a USWA TV taping in Memphis against Brian Christopher,” remembered Anderson. “I worked a 28-minute match with Tracey Smothers for an indy promoter in Kentucky. He was like a big brother to me down there.”

Anderson gained his first taste of national exposure as a security guard that Steve Austin laid out on a RAW taping in Nashville.

“My role was to try and keep him out of the building and stop him from getting at Vince. He ended up beating me up and drinking a beer over me.”

Anderson also had a stint in the WWF’s training dojo in Connecticut this past January. Trainers told him that his body looked good, his attitude was solid but that he needed another year of work under his belt.

From Tennessee, Anderson made his way down to Mexico where he worked for one of the top indy promotions in the Northern city of Monterrey.

“I wrestled under a mask as Blanco Lobo (White Wolf),” recalled Anderson. “It was grueling because I wrestled four times a week. Monterrey was a regional promotion and all the top national stars would pass through there. I got to work with guys like El Hijo del Santo, Negro Casas, Pirata Morgan and Mascara Sagrada.”

“The Mexicans are always giving a full effort, always putting their body on the line,” noted Anderson. “There’s more flying involved and they’re a lot quicker but I thought it was a little too choreographed.

While on vacation in Puerto Rico, hooked up with the International Wrestling Association promotion, filling in for one someone who no-showed.

In this modern era of pro wrestling where the inner workings of the business is openly discussed and acknowledged by fans and promoters, Anderson was struck how that wasn’t the case in Puerto Rico.

“The people still buy it there, they believe in it,” said Anderson. “They love to love the faces and hate the heels and the promoters still insist on separate dressing rooms for both factions. Kayfabe is still alive and well in Puerto Rico.”

The IWA is an upstart promotion that is competing against Carlos Colon’s World Wrestling Council, a promotion that has had a stranglehold on the island for close to 25 years. Pushing aged veterans like Colon, Abdullah the Butcher, Chicky Starr and the Invaders, the IWA seeks to bring an infusion on new, young blood into Puerto Rico.

“They bring in top indy stars from Mexico and Japan and work with the WWF when they come to Puerto Rico,” stated Anderson. “I think Puerto Rico is tired of the same guys being on top. Dutch Mantel is the WWC booker, which should tell you how bad things are over there. Puerto Rico is ready for some new blood.”

The war appears to be just heating up as a joint IWA/WWF card drew 14, 000 fans to an outdoor stadium, the largest crowd in Puerto Rico in years. It will get even hotter this Fall when the IWA’s TV show will start to air on TV and they move to a full time schedule.

Expect Anderson to play a key role in this promotional war.