Will Bret Hart be facing Hulk Hogan in Toronto?

Rumours have been running rampant since it was announced that WCW was going to be holding Nitro at the Air Canada Centre on March 29. 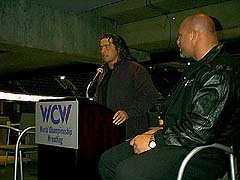 Bret ‘Hitman’ Hart and Goldberg at the WCW press conference in Toronto. —  Photo by John Powell

Hart was neither able to confirm or deny the rumours at a press conference that was held at ‘The Hangar’ last Thursday.

“I’d love it, if it was Hogan,” Hart said. “It should have happened the first day that I walked in the door.”

Hart is unclear as to how WCW wants to use his character.

“One day I’m the head recruiter for the nWo and the next minute I’m fighting Scott Hall,” said the Canadian grappler. “Unfortunately some of the storylines never seem to materialize or they seem to change.”

“Maybe they’ve been holding me back thinking that they were coming to Toronto sooner.”

It will be Hart’s first match in Toronto since he left the World Wrestling Federation two years ago.

He has come full circle from his days of wrestling for the Tunneys at Maple Leaf Gardens.

He has gone back to being the bad guy that first won him over with the Toronto crowd.

“The fans were really hard on me” when he was a good guy, he explained. He is very happy to be back to the old Bret.

“I prefer to be a bad guy. It’s safer. More fun,” Hart said. “I think fans want me to be something a little different.”

Mean Gene Okerlund and Goldberg were also at the press conference.

Okerlund told the press that the people of Toronto were in store for a different brand of wrestling when WCW comes to town. But with Diamond Dallas Page’s wife Kimberly being rolled out of a car have just aired, SLAM! Wrestling asked Hart if his current employers were heading in the direction of their rival, the WWF.

Hart said that the incident was probably meant to be an accident.

“We’re not sending a message that you should beat up your girlfriend,” he said. “I’d have no problem with my kids watching it.”

“I like wrestling the way it was,” The Hitman said.

“A lot of stories aren’t credible,” he said referring to the fact that there just ‘happened’ to be a camera at the bank when Raven was taking out $20,000.

He also questioned Hogan seeing a ghost in the mirror last year.

“But the ratings seem to be great and everyone’s making money. Who am I to question what’s good and bad when things are so successful.”