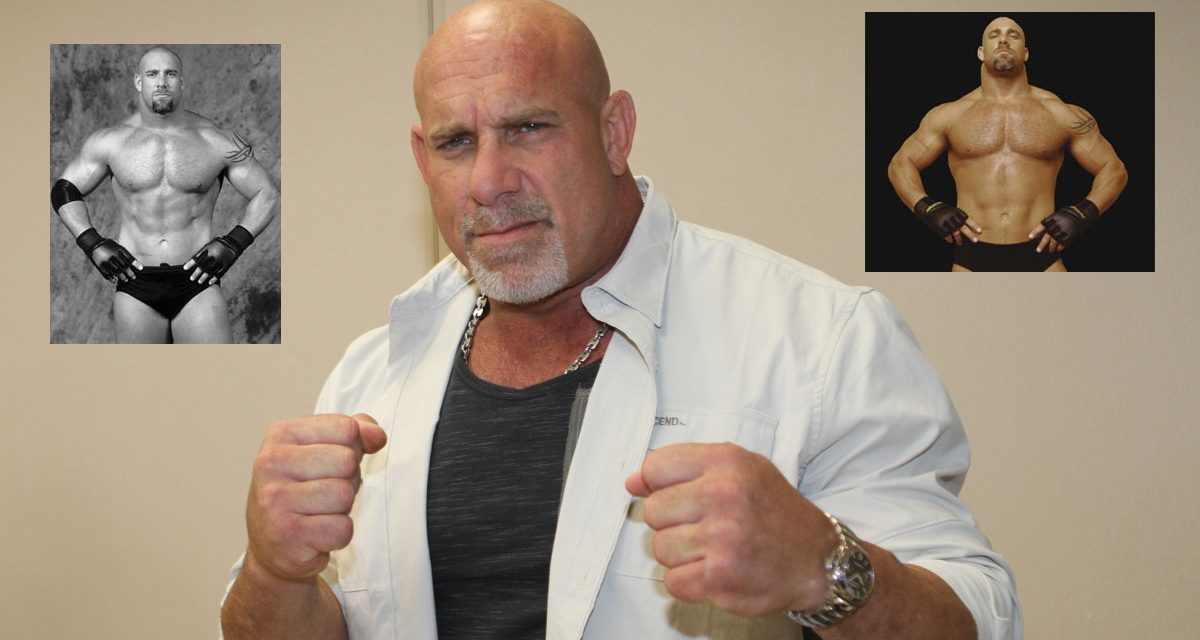 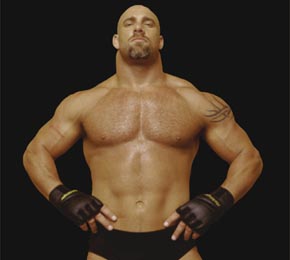 Like him or hate him as a pro-wrestler, you’ve got to respect Bill Goldberg – the man. Though Goldberg’s story isn’t unique in the biz, a pro football player stepping off the gridiron and into the squared circle, it takes a person of great will to carry on after everything they’ve worked their whole life for is scattered to the wind.

A severe abdominal injury brought the curtain down on Goldberg’s football legacy nearly breaking his spirit. Chancing upon a career in pro wrestling gave him a fresh start. A break, the 6-foot-4, 285-pounder is ever thankful for.

“I appreciate this chance because I know what it’s like to be on top and then I know what it’s like to be definitely at the bottom months after my injury when nobody in the NFL wanted me,” said the former WCW World Heavyweight Champion in a one-on-one with SLAM! Wrestling at last week’s WCW press conference plugging the Air Canada Centre’s live Nitro event on March 29th.

At the media meet and greet, the concussive mat war dynamo fans see on television every week could not be found. There next to the podium as reporters milled about doing what reporters do (nailing interviews and eating the free food), sat an approachable, soft-spoken, articulate man dressed in everyday track pants, running shoes and a black top. Nothing fancy-dancy about this guy. He doesn’t dress like a star. He doesn’t act like a star. Goldberg is no-frills all the way. What you see is what you get.

Born and bred in Tulsa, Oklahoma, Goldberg’s father was an obstetrician and gynecologist. His mother Ethel, a concert violinist. The youngest of the four Goldberg children, Bill aspired to be a pro football player ever since he could first hold a football. You couldn’t pry the pigskin out of his hands. He trained hard. He practiced hard. A bull of a kid, Goldberg fudged about his age to land a job as a bouncer at the age of sixteen. Then, like now, he kicked tail for a living.

In 1985, Goldberg realized his goal. He was awarded a scholarship to the University of Georgia, home of the bone-crunching Bulldogs. Goldberg earned a degree in Psychology there and Football News recognized Goldberg as an All-American while the Associated Press honored him with All-Southerneasten Conference status. He was drafted in the 11th round by the Los Angeles Rams, roomed with future WCW star Kevin Greene, but failed to make the team in ’89 and ’90. Frustrated at the lack of progress, Goldberg joined the World League Of Football and the Sacramento Surge. The Surge defeated the Orlando Thunder in Montreal to win the 92′ WLAF championship. Goldberg recorded three sacks that year.

The NFL’s Atlanta Falcons snapped Goldberg up from the WLAF. He played 14 games in three years for the Falcons then the abdominal injury in a preseason game crippled his career. Goldberg’s contract was claimed by the Carolina Panthers in the expansion draft but the injury prevented him from making the team. With a heavy heart and a broken soul, Goldberg retired from the game he loved.

Goldberg found work in Atlanta area gyms as a personal trainer. Slogging away at what he calls “crappy ex-football player jobs”, Goldberg hung around with WCW superstars Sting, Lex Luger and Diamond Dallas Page. It was Luger and Sting who brought Goldberg to his first wrestling match. A meeting with WCW Vice-President Eric Bischoff convinced him to give pro wrestling a shot. He enrolled and successfully graduated from the physically demanding pro wrestling course at the WCW Power Plant training facility.

Goldberg’s rapid rise to stardom in World Championship Wrestling shocked other wrestlers and fans too. He defeated ECW veteran Raven to capture the United States Championship (a belt second only to the WCW World Title) on April 19th, 1998. The mega push didn’t stop there. In July of the same year, Goldberg vanquished Hollywood Hogan winning the WCW World Heavyweight belt on an edition of Monday Night Nitro. Goldberg’s gimmick was a 173 match undefeated streak which lasted (according to WCW officials) until Kevin Nash pinned him for the title at Starrcade that December.

Ironically, it is Hogan to whom Goldberg has been likened to. Regardless of their limited abilities in the ring and repetitious style of matches, fans took a shine to them. Their one-of-a-kind charisma is what got them over.

As Hogan does today, Goldberg has a legion of critics ridiculing his popularity. He didn’t pay his dues. He doesn’t wrestle well. He has poor mic skills. You’ve seen one Goldberg match, you’ve seen them all…is what they say. Goldberg makes no apologies for what he’s been able achieve in a short period of time. 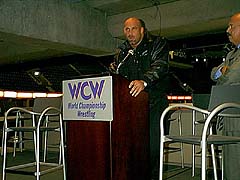 Following his loss to Kevin Nash at Starrcade, observers wondered what would become of Goldberg now that his winning streak and WCW World title reign were but a distant memory. Goldberg isn’t dwelling on the past. First and foremost, he’s focusing on improving himself as a wrestler and a person. Championship gold is the furthest thing from his mind these days.

“My goal is to improve every single time I get in the ring. You’re only as good as the next time you step into the ring. So, as long as I improve then win, lose or draw, I don’t care. My whole thing is to get better as a person, as an athlete and a wrestler. If it means I lose here and there. If it means I don’t get shots at the belts, so be it. As long as I improve, that’s all that I looking to accomplish,” he said.

Part of the plan to better himself includes devoting as much time and energy that he can to causes that are special to him. An active supporter of the Make-A-Wish Foundation for critically ill children, Goldberg is also a spokesmen for the National Humane Society. Goldberg feels it’s his duty to get involved and set a good example.

“If you’ve got the public’s eye and you don’t do something positive with it, then you should never have had the notoriety in the first place. You should give back ten times what you get. I’m pretty big in the public eye right now. Time Magazine. Leno. Regis And Kathy Lee. Whatever it may be, I’m trying to use those avenues to try to get to people on important issues,” he said.

In the ring, WCW has reinvigorated Goldberg’s push by luring former Extreme Championship Wrestling World Heavyweight Champion, Bam Bam Bigelow, away from the smaller Philadelphia promotion. A monster of a man, Bigelow is the perfect match for Goldberg in size and in speed. Portrayed as belligerent outsider, Bigelow got in Goldberg’s face interfering in his matches, jumping him in parking lots and backstage.

This Sunday the two behemoths meet at the SuperBrawl pay-per-view. Goldberg is not impressed by Bigelow’s ECW credentials though he admits “The Beast From The East” definitely has guts for challenging as he has.

“You can’t get any more ‘hardcore’ than me. So, I don’t think twice about Bigelow’s background. It doesn’t bother me. I’ll fight him right in the street. I’ll fight him here today. I don’t care. Anybody on the face of the planet who says they’re ‘hardcore’ has to prove it to me,” said Goldberg confidently.

What really gets under Goldberg’s skin is the World Wrestling Federation’s Gillberg parody. In recent months, the WWF has mocked the competition by trotting out Light Heavyweight Champion Duane Gill as a Goldberg wannabe. Unlike the ‘real deal’, ‘Gillberg’ is burned by his own pyro, was beaten by a woman and can’t win a match if his life depended on it. Goldberg doesn’t find the running gag amusing though in a weird sort of way, he does like the free publicity.

The fame he’s attained in the squared circle has thrown open the doors to Hollywood. Goldberg appeared with Kevin Nash in an episode of the New Love Boat as a pro wrestler forced to choose between his best friend (Nash) and a new bride. Next is the release of Universal Soldier 2 in August. Goldberg stars as the evil UniSol Romeo at odds with series star Jean-Claude Van Damme. In the sequel, a supercomputer takes control of the Universal Soldiers to fortify its power. It’s up to our hero Luc Deveraux (Van Damme) to short circuit the computer’s plans. For Goldberg, his first feature film shoot was a fantastic experience.

“I’m the bad guy! The eternal bad guy like the Terminator…kinda. You ever see the first one? I’m Dolph Lundgren basically,” he said unable to hide his excitement.

The live Monday Night Nitro at the Air Canada Centre next month will be Goldberg’s first wrestling match ever in Canada and the Centre’s first pro wrestling event. Da Man (as he is called) is anxious to hear the chant of GOOOLLLDDDBEEEERGGG filling Toronto’s newest wrestling venue.

“It’s going to be an honor and I’m very much looking forward to it. This is the furthest place from home that I’ve wrestled, I guess. It’ll be a new experience for me with new fans. I’ll be curious to see how they take us in considering our competition wrestles up here quite a bit. We’ll be giving them a totally different show. Hopefully they’ll like it. If they like violence…then they’ll like me,” he said.