Toronto mayor Mel Lastman was beaming from ear to ear this afternoon as the World Wrestling Federation officially announced that the SkyDome would host next year’s WrestleMania extravaganza on March 17.

Deemed the Super Bowl of pro wrestling by WWF czar Vince McMahon, WrestleMania provides an economic boom for the city. 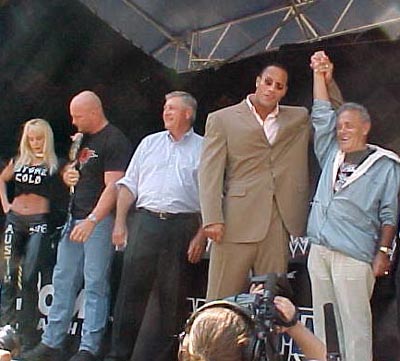 After the WWF trotted out super-stars like The Rock and ‘Stone Cold’ Steve Austin on stage, Lastman got into a grudge match with local media who grilled him over his participation in helping to bring such a ‘unseemly event’ to Toronto.

They argued his music, littered with foul language and abhorrent imagery, promoted violence against women and gays and was a negative influence on young people.

Here’s Mel Lastman on Eminem last October: “This guy is singing about violence. What kind of an idiot is this? What kind of fools are the SkyDome people to permit this?”

Critics cite the WWF and it’s brand of choreographed mayhem encouarges the same kind of violence that Eminem sings about. Isn’t this just the same thing?

Lastman doesn’t see it that way.

“No, I don’t think so. Some of the things (Eminem was) saying, and some of the nasty things (he was) doing was objectionable.”

But doesn’t the violence portrayed in wrestling disturb him?

A minute later Lastman, who will be attending tonight’s TSN network broadcast of the WWF’s RAW is WAR program at the Air Canada Centre, admitted he had never seen a live WWF event: “I’m going tonight for the first time. I’ve never seen wrestling before.”

One reporter asked Lastman about the dangers of the sport, pointing out that in 1999, Canadian wrestler Owen Hart died in the ring in the middle of a pay-per-view event in Kansas City.

Lastman had no real answer.

Lastman contends it’s all about bringing in much-needed tourist dollars to Toronto.

Lastman grew animated when one reporter suggested there is a conflict of interest.

“Are you out of your mind? I have no conflict of interest. Did you take your fibre this morning?”