Hamilton, Ontario – home of the upcoming WWF In Your House: Breakdown – has always been a hotbed for wrestling, but more importantly, a great place to learn the mat game. 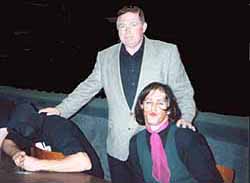 Ernie Moore at the autograph table with Ms B Haven and Mayhem. Courtesy EWF.

And so Hamiltonian Ernie Moore, a 22-year vet of the wrestling wars, continues the tradition.

As chief trainer for the Empire Wrestling Federation, based out of Burlington, Moore is training the next generation, just as he himself was trained at age 16 in Spittle’s gym in Hamilton along with future stars like Jack Hill (who gained fame as Guy Mitchell), Chris Tolos, Rocky Johnson, Johnny Powers, Murray Cummings, John Quinn and Hurricane and Cyclone Smith.

“Some of the kids I have now, I’m so proud of,” said Moore on the phone with SlamWrestling.net in early September 1998. “If he’s willing to listen, to learn – he’s teachable.”

He mentions the EWF’s Billy Boogie as one of his best students.

Moore was a gym rat in 1956, and hung out at Spittle’s gym. And he got to meet many wrestlers.

“I liked working out at the gym. There was a camaraderie there with the guys,” he explained. “They accepted me at any early age.”

Less than a year later, Moore made his pro debut in a tag team match with friend Jack Hill (who was then only 16 himself) against Marty Valenti and Johnny Evans (known to many as Reginald Love). Though Moore and Hill lost the match, they went on to become a successful tag team in southern Ontario. 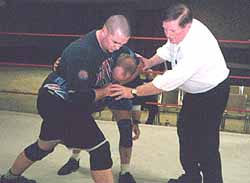 Little did Moore know at the time that his claim to fame wouldn’t come for eight years.

The year was 1965 in Michigan, (two years after he was married, as Moore remembers it), and promoter Harry Light was in a quandary because one of The Hangmen couldn’t make it. He asked Moore to don one of the masks, and things changed.

“I near caused a riot,” recalled Moore. And more surprising for him, “I liked being a bad guy!”

He wasn’t one of The Hangmen very long.

Realizing the power of the hidden face, he created The Executioner and terrorized wrestling crowds across North America with his dark mask.

His two favorite opponents were fellow Canadians, Tarzan Tyler (“he was just a nice guy. He was a good mat guy.”) and Rugged Ronnie Garvin (“great wrestler”).

It all came to an end for Moore in 1979 however, when he was involved in car accident and suffered through back pain for years.

“There’s probably a few more years I could have had at it,” he guessed. “I miss the accolades, the excitement, the walk down the ramp.”

The accident forced Moore to retire, and concentrate on his other jobs. He worked at the Hamilton Spectator newspaper for 28 years – even while wrestling – including a stint as supervisor of production. Moore was also a bodyguard and a security guard at different times.

These days, besides helping train with the EWF, Moore is general manager of Carmen’s Limousine and a regional manager with Eastlea Security.

He was my all-time favourite wrestler. The Executioner persona was later used by Killer Kowalski and John Studd in Florida, but Ernie Moore started it. The Executioner wasn’t a simple villain but a loner who walked both sides of the fence long before Stone Cold Steve Austin became famous for it. He was a technician who had a mean left fist and sleeper finisher. He was a tag-team and singles man with memorable matches against Mad Dog Momberg, Killer Karl Krupp (think about that!), the Fargo Brothers and more. He was the man I thought the NWF didn’t promote enough. He would have been a great North American champion and I would have liked to team him with Dr X (Jim Osbourne) to have a sleeper-figure four team and set them against the Fargo Brothers, the Castillio Brothers, von Hesse and von Schotz, and Denucci and Martinez in a four-way struggle for the tag-team belts. The Executioner didn’t waste time with lots of matches ranged against enhancement talent. He always went for the quality matches and that was one of the unrecognized things that made him such a fine wrestler. The NWF didn’t slip often, but this was one of those cases where they did. In many ways Ernie was far ahead of his time.
-D Jason Cooper