The debate between boxing purists and fans of mixed martial arts continues to rage on.

Ultimate fighting enthusiasts consider boxing a dying sport that only encompasses a fraction of what comprises MMA.

While boxing devotees see this relatively new sport as nothing more than street fighting with a complete lack of tradition. 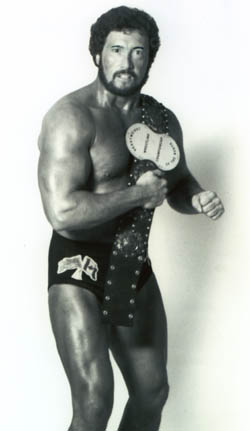 Johnny Powers in his heyday

“There isn’t a boxer who can take out a mixed martial artist,” Powers said. “All the MMA fighter has to do is get in, leg hook, put him on his belly and what’s the boxer going to do? It’s even obvious to my grandmother and she’s dead, by the way.

“Boxing is one-dimensional and it’s had its day. If a new big guy comes along it could come back, but it will never overtake MMA because MMA is fresh and new.”

A three-time world wrestling champion and former Tae Kwon Do competitor, Powers was honoured alongside Muhammad Ali, Lou Thesz, and Antonio Inoki as one of the 18 greatest fighters to compete in Japan. He feels so strongly about MMA that he’s decided to get in on the action as a promoter.

“Here I’ve got three things I love: submission wrestling, martial arts and boxing all combined into one game,” Powers said. “I’m like a dog in a backyard with a ball and a bunch of dog biscuits — I’m having a good time.

“As with anything, mixed martial arts has at least another five-to-seven year window (where it remains popular). That means I have as long to get my act in order. So I’ve given myself 18 months to get my act in order and then I hope it rides for another three to five years. Anything after that is gravy.”

The next stop for Powers’ martial arts show is Simcoe, Ontario, on July 13. MMA itself is not sanctioned in Ontario, but Muay Thai kickboxing and submission wrestling bouts will be showcased on the card.

“I’m still under the Ontario boxing and wrestling commission, but I have a fully-sanctioned CAMTAO — they’re sanctioned by the province for Muay Thai fights,” he said. “They’re pretty smash-mouth; they throw shots to the face and all that. So I’ll probably have somewhere between six and eight of those, plus I’ll have another four to six submission wrestling and Brazilian Jiu-Jitsu matches.

“When you leave my event, I hope your t-shirt, or if you’re a girl, your panties, are soaked. In other words, I want to have raised the hair on the back of your neck so you say, ‘Damn, I liked that. Bring it back again.’ That’s my game — entertainment.”

Shah Franco, owner of Shah Franco School of Martial Arts, helps supply Powers with competitors for his shows. He said the Simcoe event will feature a roster of non-professional fighters, but fans can expect an entertaining show.

“Since this is not a professional fighting show, a lot of the guys are intermediate to lower advanced in terms of skill,” he said. “I think the guys will put on a really good show — anyone who’s interested in watching some high-quality rolling (ground fights) will think it’s great. We’re not talking B.J. Penn-level fighters here, but guys who have been around the circuit and are looking to have fun.”

While Franco said he’s glad his fighters will be able to compete in Simcoe, he’s still frustrated by laws regarding MMA in Ontario.

“I’m disappointed that my province is not on the leading edge of sports and how there’s a bias towards the MMA-fighting lifestyle,” he said. “I’ve been on the road now for 10 years and the Ontario guy always gets booed in other provinces. So a lot of the top fighters and trainers are leaving.

“The province makes it very difficult for guys to ply it as a trade. You can teach it, but there’s no outlet for the guys who are studying it.”

Realizing the limitations of promoting martial arts in Ontario, Powers has also set his sights on an MMA show in Moncton, New Brunswick on September 29th.

“The show in Moncton will be a fully-sanctioned, smash-mouth, in your face fight — MMA full-out in a cage,” he said. “I hope to have so much going on from hard bodies, sexy little booties and muscular guys to chariots going into the arena, a Russian horse circus and people hanging from the rafters, anything I can do to entertain those people because I am a sports-entertainer.”

For the time being Powers’ says he’s out to “make money and have some fun,” but his vision for his new found martial arts group extends past his own involvement.

“I’m 64 and I just hope to build an infrastructure of talented people, so I can hand over the reigns,” he said. “I’ll have about 35 or 40 people who will know how to find fighters, train fighters, create good television and promote great fights.

“Then they’ll be able to survive for 20 or 30 or 40 years because combat sports will never go away. It will always be here because it’s a basic spectator concept that’s practically a part of our DNA.” 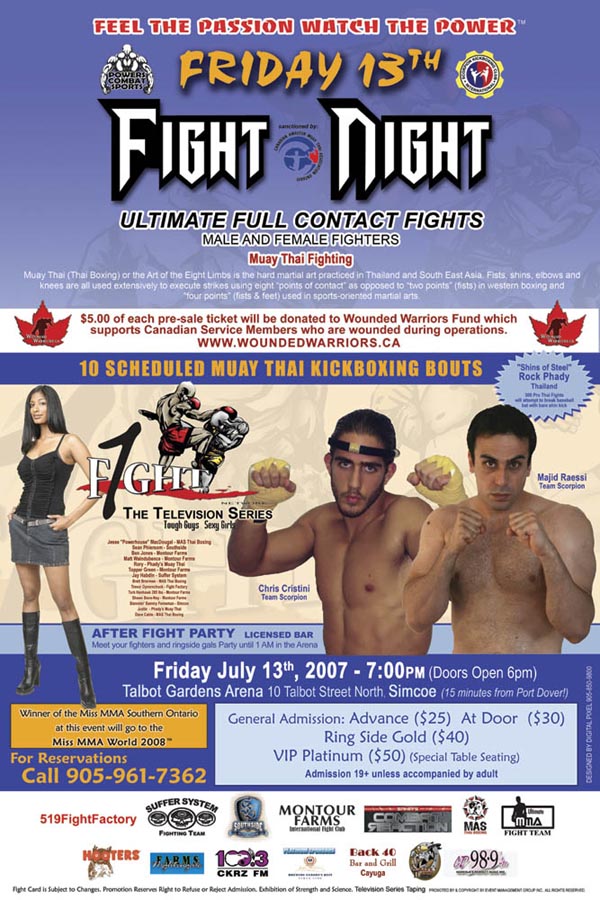 Neil Springer is an aspiring young journalist who works as an online editor and writer for Canoe.ca. He enjoys long walks on the beach and jumping spin kicks, preferably at the same time.