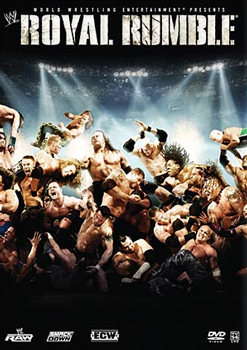 Once again WWE releases a couple pay-per-view DVDs, and once again I am left in a state of confusion.

You see, dear reader, the formula I practically give WWE quarter-in and quarter-out is simple — Back story + retro matches = happy Jon.

Unfortunately, Little Jonny isn’t quite satisfied this time. Read on and you’ll see why.

Rating: 2 out of 5 – Given the history of the Rumble, I’d love to have seen a singles match included here (how about Bret Hart vs. Razor Ramon?). That little taste of years’ past would’ve done a lot to be a teaser to what fans could expect from the Rumble box set. Instead, we get moment-in-time spots which, while fun to watch, don’t do a heck of a lot in the long run. It’s not like I’m going to keep a DVD to see the World Tag Team Titles change hands. Still, it’s better than what WWE has waiting for us just a few weeks from this release …

Extras
Chavo Guerrero Post-Match Comments
Ashley Behind the Scenes of the Playboy Photo Shoot Batista/Undertaker/Shawn Michaels/John Cena vs. Rated RKO/MVP/Mr. Kennedy
Rating: 1 out of 5 – Okay, maybe NWO doesn’t have the history that the Rumble does, but come on people, this is as bad as it gets. Chavito talking about an all-but-dead title is meaningless, and the Raw match included is just another display of nothingness from WWE. Don’t even ask me about Ashley, because this inclusion means about as much to me as a Diva bikini bonanza DVD.

In Summary…
I’m still dumbfounded by WWE’s Home Video staff. There’s certainly enough room to run some solid extras, and while matches are a step in the right direction, it’s not nearly enough to get the secondary market excited. It’s a shame, especially when you consider how brilliant the compilations are on the docu-DVDs. I certainly hope that WWE will take my advice to heart this time around.