Tarzan Tyler could deliver The Boot

The gimmick of the loaded boot is pretty-well done in today’s wrestling world. But for Tarzan ‘The Boot’ Tyler it was his everything in his career.

First off, what a great nickname — ‘The Boot’, or in his native Quebec, ‘La Botinne.’ And what a simple but effective move his loaded boot was. Tyler would hit his boot against the mat three times to ‘load’ it, and his next kick to an opponent would put them out for good. It was devious and effective in its simplicity. Everyone in the arena would see him load his boot, except his opponent and the referee of course. 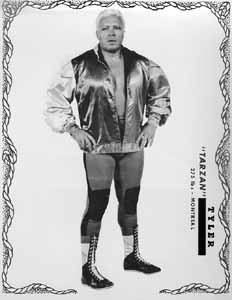 But to remember Tarzan Tyler just for his boot would be an injustice. Tyler was an accomplished wrestler would fought around the world, achieving success every step of the way. Later, he would work as a booker in a few territories, and at the time of his death in a car accident with protégé Pierre ‘Mad Dog’ Lefebvre and referee Adrien Desbois in December 1985, he was a manager for the Dino Bravo-run International Wrestling in Montreal.

Camille Tourville took to wrestling in the 1950s, and soon became ‘Tarzan’ Tourville. That eventually led to the ‘Tarzan’ Tyler name.

He made it big in the southern U.S., particularly Texas and Florida. Tyler was the NWA Southern champion twice in Florida in the mid-’60s, and also was the Florida champ, Brass Knuckles champ and Florida TV champ in the early ’70s.

In an interview with SLAM! Wrestling, Ernie ‘The Executioner’ Moore recalled Tyler as one of his favourite opponents. “He was just a nice guy. He was a good mat guy.”

Ed ‘Sailor’ White first met Tyler on the Grand Prix circuit and he became “like a father” to him. “We started driving together,” White recalled. “He was my tag team partner first, then he became my manager after that.” Tyler was “excellent” working with the younger guys, White said.

“He wrestled all the big names — Kowalski, Don Leo Jonathan, Andre the Giant. I wrestled the same guys but I’m not in the same category as Tarzan Tyler was throughout his career.”

To White’s eyes, the auto accident that claimed both Tyler and Lefebvre has linked the two forever. “They had wrestling in their hearts. They were not quitters. They were super entertainers. They didn’t give 100 per cent, they gave 150 per cent.”

I remember very well Tarzan The Boot Tyler with his gimmicks. I saw him fight on TV, but also did some sitcom on Quebec TV with comedian Gilles LaTulippe. First time I saw him live was on an Italian fest held on a park in Montreal North. He was fighting Len “Kojak” Shelley and his gimmick was a small chain he hid in his trunks, and while the umpire had its back turned, Tyler used it and hit Shelley with an enforced fist before he hid it again and explain to the ref that he had no foreign object.
His stint as a manager was great. While he was replacing Eddy Creatchman, he made some great managing with Sailor White, Superstar, Mad Dog Lebfevre, Rick Valentine, Richard Charland and Jos Leduc for a while (after he did a mockery of his strength). His biggest feat is of course having King Tonga (today’s Meng) into the International Wrestling Championship fair and square. He told everyone that he would beat Dino Bravo, even boasting that he will treat him as an old dirty mop and sweep the Paul Sauve Arena while attached with handcuffs…
His death, as well as his protégé Pierre Lebfevre and referee Adrien Desbois in Christmas Eve of 1985 was indeed a turning point at the temporary downfall of major pro wrestling in Quebec in the 1980’s
Rest in Peace, la Bottine !
Claude Leduc, LUTTE PRO QUEBEC/QUEBEC PRO WRESTLING