Probably the saddest event in the history of wrestling in the Montreal territory occurred 30 years ago today. Wrestlers Pierre “Mad Dog” Lefebvre and Tarzan “The Boot” Tyler (Camille Tourville), as well as referee Adrien Desbois, died in a car accident on Christmas Eve in Laurentian Park. 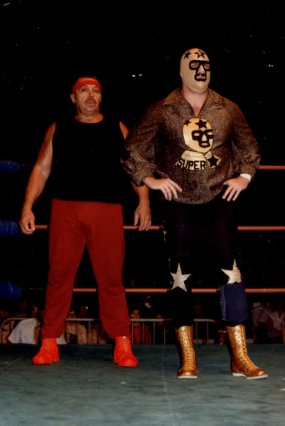 Tarzan Tyler, as a manager, and the Masked Superstar in Montreal. Photo by Linda Boucher

After show on on December 24, 1985 at the Georges-Vézina Arena in Chicoutimi, Quebec, Lefebvre, Tyler and Desbois drove in the direction of Montreal. A snow storm raged, and the road conditions weren’t good.

“It was Christmas Eve, and Tyler wanted so much to get back to Montreal,” remembered International Wrestling promoter Gino Brito.

The were in a car belonging to Desbois. After stopping for gas, Lefebvre took the wheel, with Tyler sitting next to him and Desbois in the back seat.

“We talked about our plans for the next summer throughout the night,” said Lefebvre’s best friend, Raymond Rougeau.

Having left just after his friend, Raymond was travelling with his brother Jacques, Dino Bravo and Brito, and they stopped at the well-known rest area, L’Etape, right in the middle of the park.

“A guy who worked there told me that my friend, Pierre Lefebvre, had just left a couple of minutes earlier,” Rougeau said.

Not long after the rest area, at 1:25 a.m., Lefebvre lost control of his vehicle. When he skidded he changed lanes. A tanker was coming in the opposite direction. There was a head-on collision. The road, the 175, which crosses the Laurentian Park, was at the time two lanes wide, one heading south and another heading north. The impact propelled the car into a ditch, and the three passengers died instantly. Many people passed by the ditch after the accident.

“When I saw the car in the ditch, I remember . . . I said that they certainly weren’t alive. But, I didn’t know that the passengers were Pierre, Adrien and Tarzan,” remembered Rick Martel, who only heard about their death the following day from Quebec City promoter Stan Marshall.

“We saw a tanker truck in a jackknifed position on the lay-by. It had just happened . . . The police hadn’t come yet. We said that he was lucky not to have fallen over in the ditch. But we hadn’t seen the car . . . Otherwise I would’ve recognized it immediately,” said Rougeau, who was told about the accident by a friend from Lac-Saint-Jean.

Later that night Frenchy Martin stopped at the same rest area. The guy at the pump told him about the accident.

“Hey, what happened to Pierre is very sad,” he told him. 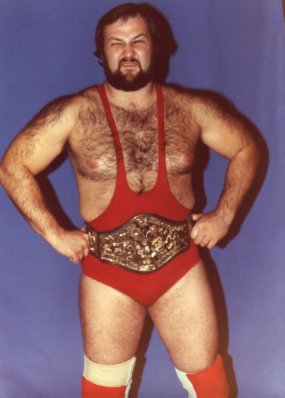 “How come you’re sad for Pierre?”

“I’m talking about Pierre Lefebvre. My father pulled his car out of the ditch with a rope.”

Not understanding what the young man was talking about, Martin went in for a coffee. Some truck drivers were there and one of them told him what happened.

“The guys weren’t lucky,” one guy told him.

“You don’t know, Frenchy? The guys had an accident here a couple of hours ago.”

“Pierre was the husband of my grandmother, the mother of my mom, and he called us around 5:30 a.m.,” remembered Danny, Adrien’s son, who was only 12 at the time.

Promoter Stan Marshall passed along the news to the Lefebvre family.

“It was around 5 a.m. when a promoter that I didn’t even know called me to tell me that Pierre had an accident,” said Micheline Labranche, Lefebvre’s widow. “I didn’t believe him. I was telling him to stop kidding around. But he insisted he was telling the truth. I then turned on the radio and ultimately the TV set and they were talking about it.” 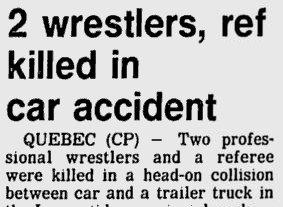 She was contacted not long after by the media. Her husband, Adrien, had been a wrestling referee for 18 years. “It was his life,” she told the press. “He was an incredible husband. He coached the hockey team our son played on, the Greenfield Park Rangers.”

The complete details of the accident will never be fully known.

Most people agree on the fact that alcohol probably wasn’t a factor. Gilles “The Fish” Poisson, former wrestler and expert in coaching wrestlers, has an interesting hypothesis. “After a wrestling match you lose five to seven pounds,” he said. “So, even if he drank a couple of beers, it wouldn’t show. It would’ve taken many more to feel the effect.”

Did Lefebvre fall asleep while driving? According to the investigators’ report, the truck driver, 36-year-old Dominique Boily of Laterriere (who was unharmed), said that Lefebvre didn’t try to avoid him at all. However the most probable hypothesis is that the car simply skidded due to the poor weather.

“The road conditions in the park during winter are just plain dangerous. It’s so slippery, and you can’t see a thing. Accidents are very common,” said Sunny War Cloud.

Being originally from Lac-Saint-Jean, Gilles Poisson confirmed Rancourt’s statement. “The park at this time of the year’s very dangerous” said Poisson. “Even those who live there skid. It’s happened to me, too.”

Tyler, Lefebvre and Desbois were significant players for International Wrestling.

Martel, who was one of the shareholders in the promotion at the time, said beside the personal loss, it hurt the company too. “This dealt us a major blow, because they were not only our friends, but they were also very important players for us.” 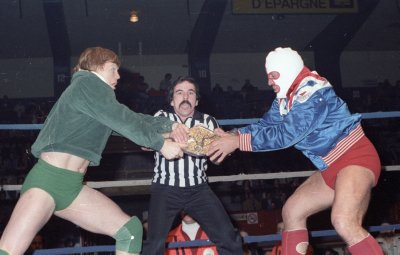 Referee Adrien Desbois gets between Bob Backlund and The Destroyer (Dick Beyer). Photo by Linda Boucher

“It was always fun with my dad. He was so often on the road that when I was seeing him, I would never get grounded, it was always a blast,” remembered Danny Desbois. “You couldn’t be bored with him. He was bringing me to the Paul-Sauve Center, to the F1 Grand Prix, we had tickets behind the bench at the Forum, all of that because he was Adrien Desbois. Thirty years later, I’m wondering what kind of relationship we would have. How it would have been to have him by my side all these years.”

For the Lefebvre family, the impact was strong, especially for Sebastien, who was only six when his dad passed away.

“After the accident, he couldn’t write or read anymore,” said his mother, Micheline. “He had to go to a special school after that. His dad was his idol. He used to watch him on TV. It took him many years before getting better. It was different for my daughter, Caroline, because she was only three.”

Being older than Sebastien, Danny Desbois had other worries after his dad passed away.

“The toughest part for me was that all of a sudden, at 12, I became the man in the family,” Desbois said. “I had responsibilities that I should have not had and it was extremely tough for me. I was also someone who had very few friends. I didn’t need any, I had my dad. So I also had to learn on how to make new friends.” His sister, Nancy, was seven years old in 1985.

Of the children of the three men killed in the accident, Danny is the only one who gave professional wrestling a try. From the mid-1990s to 2007, he wrestled for Ludger Proulx’ ICW and for Paul Leduc’s FLQ.

“I wanted to live what my dad had lived all of his life,” Debois said. “People in the business knew who I was far more than I knew who they were. And because I was Adrien’s son, I got it easy. But after a certain period of time, I had lived what I wanted to and I simply quit.”

For Sebastien Lefebvre, who turned 18 at the end of the 1990s, pro wrestling was never a goal.

“I didn’t think that with my height and being from Quebec that I could do that as a living,” Lefebvre said. “But I always kept myself in shape and since a little bit more than a year now, I started doing bodybuilding competitions.”

The more Sebastien grew, the more he started to look like his dad.

“About 10 years ago, I was in a reception at one of my friend’s house when my brother Armand told me that Pierre’s son was here too,” remembered Raymond Rougeau. “When I saw him, it was jaw-dropping! He had the same build, the same height, the same teeth, I couldn’t believe it. At one point, I had to shake myself up because in my mind, I wasn’t talking to his son anymore, I was talking to Pierre.”

That meeting was also important for Sebastien.

“I knew that my dad and Raymond were best friends,” he said. “I wanted to know more about my dad when he was younger and stuff. I have uncles who told me stories, but it was different with Raymond.”

Raymond was happy to share the stories. “My spouse Louise was beside me and she told me afterwards that Pierre’s son was all ears to what I had to say when I was telling him about his dad.”

Pierre Lefebvre’s career is without a doubt the biggest “what if” in the history of Quebec Wrestling, because he passed away just before the WWF signed the biggest names from the province, like the Rougeaus, Martel, Bravo and Martin.

His widow, Micheline, is sure that Pierre would have not said no to an offer from the WWF.

Wrestling fans in Quebec have certainly not forgotten Tarzan Tyler, Adrien Debois and Pierre Lefebvre, and for Sebastien Lefebvre, that means a lot.

“I think it’s really gratifying to know that fans still remember him after 30 years. It’s really special for me,” he concluded.

Pat Laprade would like to thank Micheline Labranche, Sebastien Lefebvre and Danny Desbois for their contribution to this article and to have shared with him their emotions and feelings on this sad anniversary. He wishes all of them a Merry Christmas and a Happy New Year and he also wishes that the memories of the ones they lost will be with them forever.