DETROIT – The WWE appeared at Detroit’s Joe Louis Arena for its their annual holiday stop. What follows is the results and commentary from Matthew McFarlin, the 11-year-old son of photographer John Brad McFarlin.

Dolph Ziggler beat Tyler Breeze. (Matt: Wow, Dolph is now wrestling in the opening match? But this was a great, fast paced bout.) 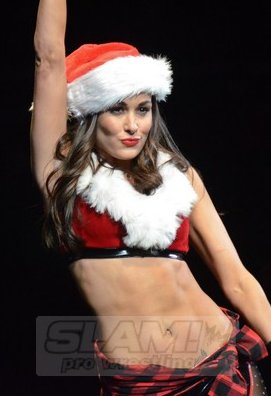 Brie Bella is quite a Christmas treat. Photo by Brad McFarlin

Goldust pinned Bo Dallas. Bo decided he needed another chance, so Jack Swagger came out. Swagger won via a tap out. (Matthew: Why does Bo Dallas have to wrestle twice and not even get a win?)

Fandango, Darren Young, Curtis Axel, Damien Sandow and Zack Ryder defeated Heath Slater, The Ascension, and Los Matadors. (Matthew: This was as good a time as any for me to get up to the concession stand and buy a NEW DAY t-shirt.)

Kane defeated Bray Wyatt. (Matthew: I waved my cellphone light while Bray came out just like everybody else. This was a fun match to get into.)

Team Bella defeated Team Bad. (Matthew: It could have been my imagination but I think Dad’s motor drive caught on fire while he was shooting Brie Bella.)

New Day defeated the Usos and the Lucha Dragons. (Matthew: So far, New Day is getting the biggest pop of the night. They are playing the bad guys but it seems that no matter what they do, the crowd is cheering.) 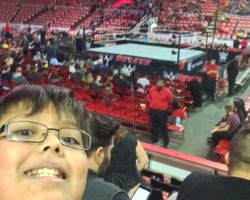 Matthew McFarlin at the WWE show.

Roman Reigns defeated Sheamus in a no disqualification match. (Matthew: Best match of the night, and Roman was the biggest star — closely followed by New Day. Sheamus has welts all over his back from matches he was in only a week ago. They pulled out chairs, kendo sticks, and tables to use on each other. Looked like Sheamus was trying to kill Roman with the kendo stick. Match ended just about the way I thought it would.

Photographers note: I heard New York City sold out at Madison Square Garden, which doesn’t surprise me, since they had the “A” team. But the WWE had to have been pleased with the house in Detroit. I can never estimate very well but I’m going to say at least 10,000. Main floor was packed. They return real soon, for RAW in February.