Even if wrestling is not what it used to be in la Belle Province we have been lucky in the past few years with great documentaries like les Saltimbaques du Ring and Theatre Extreme celebrating the nostalgia for those bigger than life persona and an era long gone from Quebec.

The Rougeau family documentary that aired on RDS on December 30 — Les Rougeau : quatre générations de lutteurs — was a notch above anything that has been done here so far. Finally, the general media is moving away from the question of whether wrestling is predetermined or not. In fact, they barely took time to set the record straight before jumping in the heart of the subject a family whose name is synonymous with pro wrestling in Quebec and that has turned up a new wrestling star in every generation. 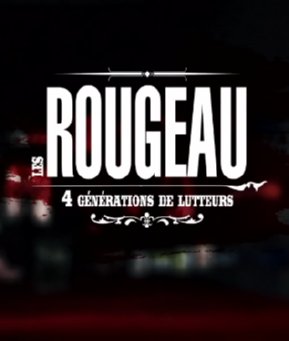 It began with a set-up with Jacques Jr. as the only one still in the limelight these days. Not that his brothers and sister have been forgotten, but this documentary needed to start somewhere. Jacques Jr.’s son, Cedric, has big dreams to makes the WWE someday so it is an appropriate start.

All the Rougeaus get their fair share of screen time, from uncle Eddy Auger, who brought his nephews Johhny and Jacques Sr., into the business, to the duo of Raymond and Jacques Jr. in the heyday of the WWF. Lesser known, but still involved, are a third brother, Armand Rougeau, who wrestled for a short while, and their sister Joanne, who promoted WWF events around town for years. Truthfully, Armand and Joanne have the more touching stories in the documentary as they didn’t quite achieve everything their family name had the potential to bring them.

We learned how well adjusted Raymond has been since he retired from the business. He is a successful businessman who is serving his fourth mandate on the city council of Rawdon, a small town outside of Montreal. He’s fiercely proud of his family’s legacy and his own, but not in a cocky way — it’s in a way that makes you understand that his life and his career were built on respect. Respect for his family name but also respect for every wrestling fans that made them who they are.

Even Jacques opens up a little bit about how difficult it was to be a Rougeau in Montreal wrestling; he had big shoes to fill and it was not easy to escape the large shadow cast by his family. Plus he had to follow in the footsteps of his older brother Raymond. You can truly feel the passion still burning in him for wrestling which explains why he never stayed retired and has run a successful school and promotion.

The genius in this documentary is that it goes beyond the name Rougeau and we get to know them as individuals, making wrestling the soundtrack to the lives of very real people who had great triumphs but also some difficult time adjusting to life in the limelight or post-wrestling.

Watching this made me proud to be a wrestling fan because the Rougeau name means respect and for the first time I felt that a documentary was really giving the art of wrestling and the accomplishment of such great careers the respect it truly deserved.

I hope a lot of people who grew up with the Rougeau name will get to see this piece as it is truly showing the industry and their most famous representative in Quebec in the best light possible.

I also would like to encourage RDS to make a deal with The Fight Network or another English network in Canada to air this with subtitles. I feel all wrestling fans would enjoy it.