Crowd watching at WWE in Toronto

TORONTO – When you have been to as many wrestling shows as I have through the years, it can be a little onerous to sit through another house show. Even with my nine-year-old son, Quinn, beside me, popping at the right moments, and sarcastically commenting at other spots, the WWE show at Ricoh Coliseum in Toronto last night was a trial at times.

This is not to knock the efforts of the wrestlers, most of whom worked their butts off. 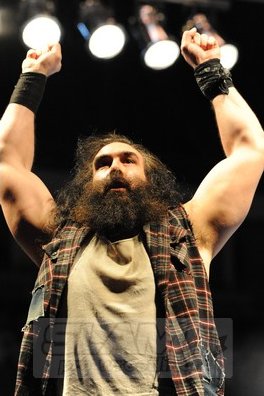 Except for The Big Show, but that was by design. It was also an example of the lost art of the stall, evoking images of Larry Zbyszko yelling at each and every fan at ringside on his way to the ring.

The Big Show was scheduled to face Mark Henry for the 8,153rd time — an unofficial count — but took the stall to a new level, and it was over 10 minutes before he finally locked up. In the end, he won too, but that was beside the point, which is that his body didn’t need to take all the big bumps and he got more crowd reaction than only the top names on the card by doing less.

Of course, crowds today take their cues from television, and having seen the hot audiences react (often unfairly) with “boring” chants, that’s what happened.

On the flip side, the “this is awesome” chant for the Dean Ambrose victory over Kevin Owens, retaining his Intercontinental title in the process, was undeserved to these eyes.

But then again, these eyes have seen some greats over the years. My mind drifts back to Detroit’s Cobo Hall, the Great American Bash tour in the summer of 1988. If we had been trained to chant such a thing, then our noise during the bout between the Midnight Express with Jim Cornette, and Arn Anderson and Tully Blanchard, with JJ Dillon, would have blown the roof off the soon-to-be demolished building.

Wrestling has changed through the years, but I’m not really sure that the fan base has. It is inclusive to everyone, regardless of your background, and always has been.

The amount of money involved has gone way up, though.

There is little doubt that the post-Christmas tour brings in tons of dough for WWE, with Little Jimmy and his buddies getting tickets for Christmas, Hanukkah, or a birthday. Families filled the Ricoh Coliseum last night, and the building gets tons of concession sales dwarfing the AHL Marlies, and WWE moves ungodly amounts of merch. (For me, it was a small victory in parenting when my son balked at paying $75 for a Money in the Bank briefcase, which would have been all of his Christmas money.)

Besides the families, there are the hardcore fans. They would be there regardless, just as they will be at the next SMASH or Destiny or Superkick’d show in town. They are the spine of the sport.

Yet the biggest impression I got was from the “Cool People,” the developmentally disabled fans with challenges well beyond the next T-shirt purchase. It’s a term I got from a book called Short Bus Hero, which I reviewed back in April: Take Short Bus Hero for a ride. Reflecting back on the final day of 2015, it’s a book that stuck with me more than most.

In short, it’s about a few people with Down Syndrome, one of whom wins the lottery and decides to invest in a wrestling promotion. It flew under the radar, but is worth searching for, as it’s funny and heartwarming.

After reading it, I followed up with the author, Shannon Giglio, and we talked about the hold that pro wrestling has on fans with mental and physical difficulties.

“My ex-sister-in-law has Down Syndrome, and she is the biggest wrestling fan that I have ever met in my life. She had the opportunity to meet some semi-pro wrestlers and it was like the best thing she ever had in her life,” Giglio told me for a story. “It just started me thinking about her. Her mom was thinking about trying her to get her on a list for her own apartment, living in a group situation. I just started thinking, ‘You know, that would really make a good story somehow. How can I make this into a story?'”

In a city like Toronto, and a country such as Canada, the developmentally disabled are not ostracized, but welcomed into the mix.

And pro wrestling continues to provide a wonderful blender to mix everyone up: the young, the old, those with visible handicaps, and those where the challenges aren’t seen on the surface, and definitely every colour under the rainbow.

It brings people together, particularly when 6,000-plus people can all agree on the important issue of the day — that Luke Harper of the Wyatt Family really needs to take a shower.

Here’s a quick rundown on the actual matches: