It’s always interesting how books come to one’s attention. One of my freelance gigs is reviewing sports books for Publishers Weekly, and it was through the titles up for grabs that I came across Short Bus Hero. There’s no denying it’s a catchy title, so, intrigued, I looked it up. The unexpected tie-in to professional wrestling made it a given to do something here at the site. 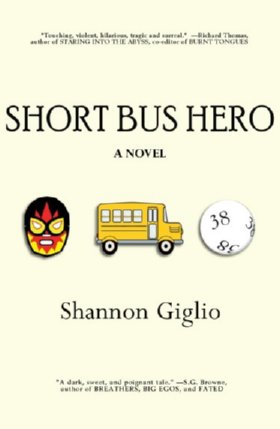 Short Bus Hero, written by Shannon Giglio, takes a very delicate subject — people with Down Syndrome — and weaves a funny, heartwarming tale that involves a huge lottery win, angels and some of the most interesting takes on professional wrestling ever found in a mainstream book.

Backing up a bit, there’s the title. For those unfamiliar, school buses come in different sizes, and the “short bus” is the nickname that I knew growing up for the kids that came to school who were developmentally challenged. Short Bus Hero later becomes the nickname for one of the characters.When I was growing up in the 1970s, we called the kids on the short bus retarded, which is thankfully a term that has fallen out of fashion. But Giglio uses it on many occasions in the narrative, a short-hand of a different sort, showing the shortcomings and biases people display to people different than their own.

Going in, there was a bit of that trepidation in me, unsure where the book is going and how much would be dwelling on the trials and tribulations of young adults with Down Syndrome and how much would be about the wrestling. It’s a rough start to the novel, and it wasn’t until about halfway through that I felt truly invested in the characters. By the end, good luck holding in your emotions.

There are three key people to the whole book — the unnamed angel, through whom the story is told (awkwardly at first, but it smooths out); Ally Forman, a $350-million lottery winner with Down Syndrome; and Stryker Nash, a beat-up pro wrestler on his way down, but who still remains the favourite of Ally.

If the angel, Ally and Stryker are the meat and potatoes of the book, then everyone else is gravy of a sort, including the others with Down Syndrome, the families of the “Cool People,” the wrestlers and management. The author wisely steers clear of some of the distractions that would have come with anyone winning that much money, let alone someone who is not seen as fully having control of her faculties.

Given the subject matter, I wasn’t sure how authentic it would all feel, but Giglio did a good job, and I felt empathy for the parents and pride in the Cool People, rather than the easy road of pity and disgust.Now for the wrestling. Again, Giglio has done her homework. It’s a bit of a leap of faith to imagine some of the showmanship she envisions — think The Brood running a whole promotion — but given the way the wrestling world is going, it’s not an out of the question idea.

Stryker Nash has a lot of Mickey Rourke in The Wrestler in him, a reference he actually makes along the way. His transformation from star to has-been to redeemed soul is one of the key plot points of the book. There is enough legit wrestling talk and believable backstage maneuverings to sate the desires of any hardcore fan. The in-ring action borders a weird line between legit fighting and done-to-the-hilt choreography, but it’s not the focus of the book, so it’s a forgivable weirdness.

Wrestling and Down Syndrome come together in ‘weird’ Short Bus Hero