It’s a mouthful of a title — The Wrestling Archive Project – Classic 20th Century Mat Memories Volume 1 — but it is well deserved. It’s the latest book from biographer and author Scott Teal, and is worth seeking out.

As is anything Teal has put out under his Crowbar Press imprint — 20 books about pro wrestling, and two on old time westerns … so far.

To understand what Teal means to the industry and preserving its history, let’s quote preeminent wrestling historian J Michael Kenyon, who can put a finger on facts pertaining to the “Kayfabe Era” of professional wrestling. In the introduction to The Wrestling Archive Project, JMK has some impressive numbers regarding Scott Teal’s notes: “I have actual count, 511 computer files full of things Scott has said or has heard someone else say, or is going to say, or has written down about professional wrestlers who have strode the planet earth in the past 80 or 90 years, the files average 80,000 words apiece.

Similarly, there’s an impressive amount of information is contained in this book — 406 pages of content, including 187 photos and many newspaper ads advertising upcoming wrestling cards in Florida, Texas, California, Tennessee, Ontario, and many other locations as well. 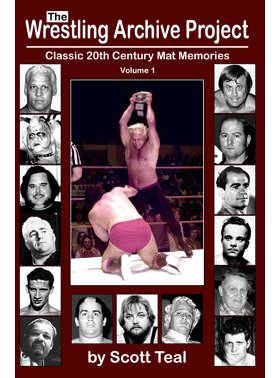 Teal saw his first episode of Championship Wrestling from Florida on Tampa’s WLCY TV Channel 10. From 1968 through 1974, he was on the outer edges of pro wrestling as a newsletter/bulletin/publisher of The Tampa Scene and Florida Fan Fare, as a photographer at shows in the central Florida area, and a writer for national newsstand magazines.

During this time, Teal stayed in the background, and did not pry into the inner workings of promoter Eddie Graham’s business, as he felt that Graham might tell him to take a hike if his presence became an irritant.In 1974, Teal decided to leave Bradenton, Florida, and attend Trevecca Nazarene College in Nashville. That decision would lead him to an involvement in the pro wrestling business, as well as a lifetime of researching and writing about pro wrestling history. Here’s his take on the move behind the curtain:

I came to the matches in Nashville and shot pictures only occasionally 1974, but made a trip one Saturday with Don Greene to the Braun Civic Centre in Huntsville, one of the wrestlers came out and said that Nick Gulas wanted to see me in the back of the arena, he said that he had seen my work, and wanted to know if I would like to work for him as a photographer, well to say that I was excited is an understatement.

The seven years I worked for Nick was one of the most exciting of my life. I was living a life of which most wrestling fans dream.

When Buddy Fuller bought Nick’s business in 1980 I worked for him for almost two months, at which time Jerry Jarret took over and he told me he didn’t need my services. In his mind there was no place in wrestling business for me … a chance encounter in 1996 with a fan convention promoter would lead me to publish 53 issues of a newsletter called Whatever Happened To …? That, in turn, led to the formation of Crowbar Press in 2003 and the publication of my first full-length autobiography, Inside Out, which I co-wrote with Ole Anderson.

Wrestling Archive Project Volume 1 features 15 interviews of notable wrestlers that he came in contact with during the period that he was actively doing wrestling interviews for his Whatever Happened To …? newsletter.

The “main event” is Buddy Colt, in a lengthy, fascinating interview that is candid and very revealing. In a press release about the book, Teal touted the 117-page Colt interview: “For the first time, Buddy Colt really opens up and gives a play-by-play description of the airplane crash that took the life of his friend and tag team partner, Bobby Shane, and prematurely ended his in-ring career. He puts an end to all the false stories about how Bobby died and the fabrications made in a book written by one of the wrestlers who was in the plane crash. He tells about what happened in the months that followed the wreck — his recuperation, how he was treated by the wrestling office and the other wrestlers, ensuing health problems that stemmed from the accident, managing King Curtis Iaukea, refereeing, doing color commentary with Gordon Solie on Championship Wrestling from Florida, and how his life changed completely.”In my opinion, the Buddy Colt interview is worth the price of the book on its own. Here’s a segment where Colt is working in Kansas City, for promoter Gust Karras, under the name Ron Reed.

About two months after I got there, Gust gave me my first opportunity to wrestle Lou Thesz, the legendary NWA World Heavyweight Champion [in Kansas City, January 15, 1965].

Lou and I were in the dressing room with Gust, Lou asked Gust, “What do you want us to do?” He said, “Well, I’d like you to take a fall over Ron, and then go through the hour.”

In other words, I would lose the first fall and we would wrestle until the 60-minute time limit ran out. Lou said, “Well, that wont do Ron any good.” Then he said something that really shocked me. “Why don’t I take the first fall and Ron takes the second, and then we go through the hour.” Gust agreed. Lou asked me, “What do you do for a finish?”

I said, “Well, I’ve been using the spinning toe hold.” Lou said, “That’s fine use that to take the second fall.”

I couldn’t believe it. I had heard about Lou’s reputation. It was very rare that he would drop a fall by submission to any one. That’s what happened though. I took the second fall right there in the middle of the ring when Lou submitted. We then went through the hour. It was the biggest house they had in over 20 years.

On its own, that’s pretty amazing, but Teal follows up with a logical question: “Did Lou ever tell you why he went to bat for you?”

“Yes, he saw an athlete,” replied Colt. “If Lou didn’t like you, you wouldn’t get a match at all. If you looked like an athlete, he would make you look like a champion, but if you like somebody like Bull Curry, he wouldn’t give you the time of day.”

Many other revelations of the wrestling business are revealed in the following chapters of this book. Two of the interviews, with Adrian Street and Mac McMurray, are exclusive, never-before seen in print, and the rest come from the pages of WHT — Benny McGuire, Dandy Jack Donovan, Dick Cardinal, Frank Martinez, Gene Dundee, Gene Lewis, Gorgeous George Grant, Ernie “Hangman” Moore, Joe Powell, Lord Littlebrook, Lou Thesz and Pepper Gomez.

Scott Teal has done a marvelous job of repackaging his interviews into a very readable and visually rewarding experience.

ROGER BAKER was a writer and photographer for magazines like The Wrestler, Inside Wrestling, Wrestling Revue, and Boxing Illustrated from 1958 to 1973. Email him at [email protected].