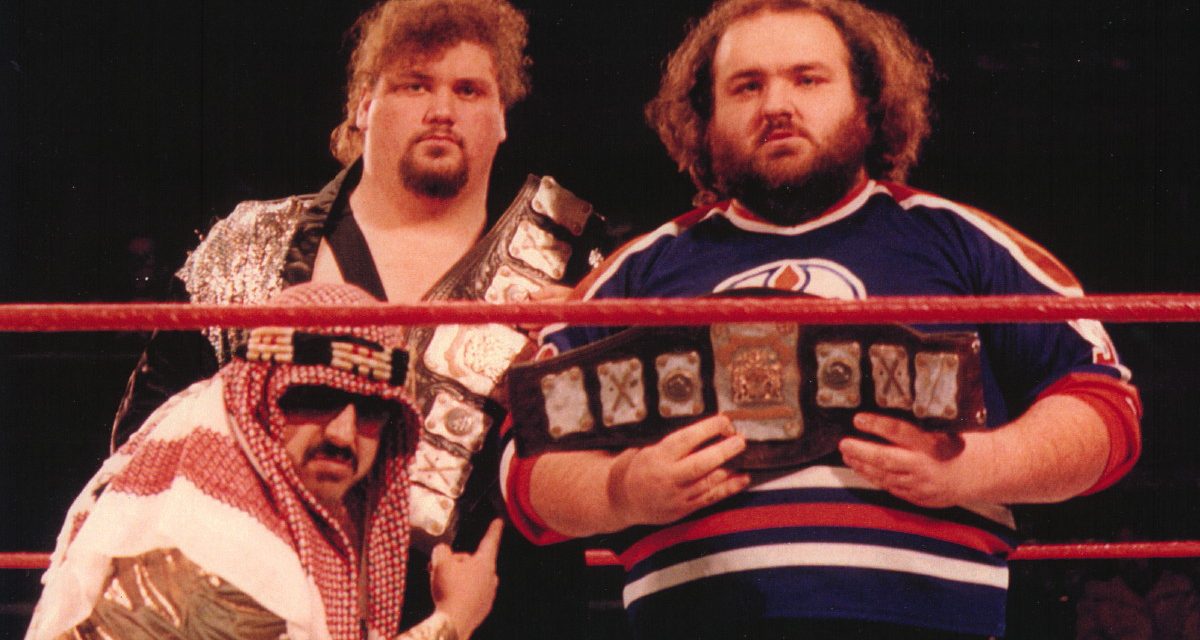 From 1987 to 1990, Milad Elzein was hard to miss at the Stampede Wrestling shows, despite that fact he was only 5-foot-2, and rarely got in the ring.

And if he looked familiar to anyone in Calgary, it’s because at one point he used to sell programs for the promotion.

Elzein’s journey to becoming Abu Wizal, the diminutive top heel manager on the Stampede circuit during its national days on TSN, is an interesting one. 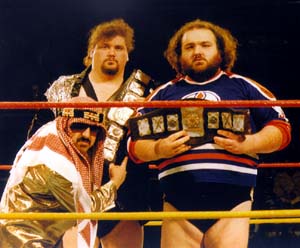 Born in Beruit, Lebanon, Elzein came to Canada at the age of eight to seek out a “better life.” His father came over first, and got a job as a sanitation engineer. “When we left [Beruit], the war was happening, [we were] being bombed. It was no place to raise six kids,” explained Elzein recently to SLAM! Wrestling.

The young Milad found a colourful new pastime in Calgary — pro wrestling. “I started going to wrestling when I was 11 years old, every Friday night, religiously,” he said. Elzein became friends with Ross Hart at the Stampede shows, as Ross was about the same age as him. That eventually got him helping out by selling programs.

Years later in 1985, Elzein’s neighbour from down the street, Shane Bower, told him that he wanted to train to be a wrestler. So Elzein took his friend to the Hart House, where he began tutoring under the skills of the Harts. As Elzein watched Bower slowly transform into Beef Wellington, he found himself drawn in as well.

“Bruce [Hart] approached me,” Elzein said. “Then he asked me, ‘Do you want to get into the business?’ I started laughing. ‘To do what? Look at me! I’m very short!” Soon, he was learning to take bumps and all the dirty tricks in the book — low blows, chokes, hiding ‘international’ objects. “He brought me along really slow.” 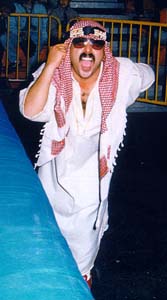 Even when Bruce felt that Elzein was ready to debut, they held him back, adding some mystery to the character they were creating together. “[Bruce] had me standing in the back by the dressing rooms in the Pavillion, just standing there with a suit, tie, sunglasses. Just stood there. And the marks would wonder, ‘Who’s this guy?’ Four or five weeks down the road, the heels would give me the thumbs up,” recalled Elzein.

The first match he worked was Owen Hart against Gerry Morrow. “I didn’t screw up. I did it perfectly right off the bat,” claimed Elzein. In November 1987, he made his debut on TV.

For the first three weeks on TV, Elzein had no name. “[Ed] Whalen goes (imitating the voice) ‘Bruce, what do I call him, what do I call him?'” laughed Elzein. Bruce Hart wanted to call him Abu Nidal after a notorious terrorist of the late ’80s in the Middle East. Whalen refused to do that name, and Bruce responded with Abu Wizal.

“I had a lot of heat in this city,” said Elzein of Calgary. “I’m not bragging or nothing, but besides [J.R.] Foley, nobody’s had as much heat like I did.” The heat was kept on him because the booker Bruce Hart always got Wizal involved in the finishes.

“I thought for sure that I was going to make it to New York, but they never approached me; I tried to approach them, but they never returned my calls,” said Elzein of the WWF.

Throughout his career, it was Bruce Hart and Gerry Morrow that had the greatest influence on him. “I owe everything that I did in wrestling to Bruce. That guy’s a genius, I’m telling you,” he said.

Morrow was his favourite to work with, just ahead of Johnny Smith. “Gerry’s a fantastic guy. There’s a lot of wrestlers in this business right now that owe Gerry Morrow their wrestling careers. … He taught me lots. He showed me a lot of things. I had to juice a couple of times, and the only person I would get to do it was Gerry, because I didn’t know how to do it because I didn’t do it enough. So Gerry, he was the one who would gig me in the dressing room.”

As for the good guys, Elzein feels that he did his best — and wildest work — with Chris Benoit. “Right through Chris’s career in Stampede Wrestling, I was there to screw-up his finish,” he remembered.

These days, Elzein is a property manager in Calgary for Olympia & York and the whole Abu Wizal gimmick is packed away (though he wouldn’t be against bringing it out again). He’s married and has two sons, aged four and eight months.

“I was going through my basement, trying to find some pictures the other day,” said Elzein. “I came across some of my tapes. I plugged one tape in and I was doing interviews lots for CNWA for Fred May. My son goes, ‘Daddy, why you speaking like that?’ I spoke with a broken accent. He was totally mesmerized to actually see me on tape.”