On Wrestling and Religion: Stars wrestle with their faith

As the battle lines between the ‘religious right’ and the WWF are being drawn over the content of WWF TV programming, both sides are digging in their heels. 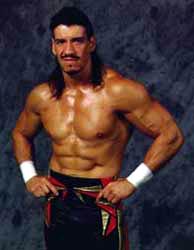 Caught in the crossfire are the forgotten casualties: pro wrestlers grappling with their Christian conscience and the stigma of the wrestling profession.

If you’re surprised that many wrestlers are religious and open about their faith, you shouldn’t be. A long list of former wrestling stars such as Ted DiBiase, Ernie Ladd, Nikita Koloff and Tully Blanchard became more involved in their faith after leaving pro wrestling. Many of today’s top stars, including WCW star Sting, ECW manager Francine and Eddie Guerrero are practicing Christians.

“Everything I have or accomplished in wrestling is because of our Lord Jesus Christ,” Guerrero told SLAM! Wrestling recently.

Guerrero is pound for pound one of the best wrestlers in the world. Years of training under the watchful eye of his legendary father Gory Guerrero and three older brothers helped him prepare for the demanding rigours of the wrestling industry.

Yet, more than anything else, Guerrero credits God for his success in the ring.

“He is my saviour and is responsible for all the gifts I have.”

You might think that wrestling and religion don’t mix. The inherent violence, the back stabbing politics, the high levels of macho-testosterone surging through the veins of beefy, muscled-up bruisers; these aspects of the mat game would suggest that pro wrestling is incompatible with the tenets of Christianity.

“If anything, (wrestling) gives me more courage to kind of do what I do, because it’s not an easy lifestyle,” said Jericho, a devout Christian, reminding fans on his website “that Jesus is the reason for the season and to give thanks to him for all we have.”

Jericho is open about his faith in God, considering it vital to his spiritual survival.

“You kind of need something else, something like the Lord watching over your shoulder to make sure that nothing happens to you. It’s more of an extra incentive, an extra kind of shove.”

Religion is a taboo subject among some of the wrestlers. Some are vocal about keeping religion out of the locker room. Others are not so offended, welcoming the chance to start some form of religious dialogue.

For Jericho, religion rarely gets in the way of his wrestling career.

“It’s never really been a problem…” continued Jericho. “(Wrestling is) not all about going up to the show, and getting messed up and trying to pick up girls and stuff.”

Some wrestlers who have been open about their religious beliefs have had a hard time.

“(My being a wrestler) gave me a lot of problems … with certain church members,” remembered Don Leo Jonathan, a major star in the ’60s and ’70s, who was born in Utah, and raised a Mormon. “A lot of them didn’t like it.”

The WWF and WCW have come under attack recently by parent and religious groups. They contend that both groups’ product, already violent in its very nature, is slipping further into the territory of sleaze and depravity.

As WWF owner Vince McMahon and WCW writer Vince Russo continue to push the limits of good taste in wrestling, some pro wrestlers are finding it difficult to reconcile their profession with their Christian faith.

“It’s a daily struggle for me,” admitted Guerrero. “Some of the stuff we do on our TV, I don’t agree with because of my Christian beliefs. It’s very hard.”

“I’m caught in the middle a lot of times. I don’t always agree with the (storylines) they program me in but I can’t complain too much because I want to be a good employee.”

Jericho tackles the problem head on and has little trouble combining his Christian faith with the direction of the WWF.

“It’s all up to the individual character to kind of regulate what he’ll do, and what he doesn’t do. I try not to swear on the shows. I’m not going to say that I haven’t, but most of the time I specifically try to stay away from that, and as far as the sexual content, I will stay away from that.”

“The violence, well it’s basically a television show that’s based around violence, and I’m playing a character,” continued Jericho. “The character may not be a Christian, but the real life Chris Irvine (Jericho’s real name) is, and once again, the WWF product isn’t really geared toward that segment, but I try to do my best to keep it as clean as I can, and just try to do what I can within the realms of where I live.”

— with files from Greg Oliver and Alex Ristic