Blast From The Past: The Fargo Brothers – Mr. Americas of the Mat World

Digging into the archives of writer/photographer Roger Baker, we revisit a Wrestling Monthly article from December 1972 on the Fabulous Fargos — Donny and Johnny. Donny Fargo (Don Kalt) is also known under many other names — Don Stevens, Jack Dalton, Jack Dillinger, and Pvt. Don Fargo, while Johnny is much better recognized as Greg “The Hammer” Valentine. 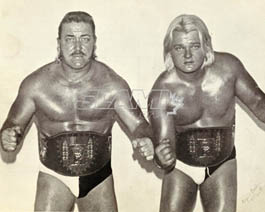 Donny and Johnny Fargo strike a pose in 1972. Photos by Roger Baker.

In every professional sport there are athletes representing their chosen game who stand head and shoulders above their teammates or single adversaries. They may be in a sport such as boxing, tennis or in the case of this article, wrestling.

Some men possess fantastic speed and strength, others are noted for endurance and courage; then there are the ones who possess that certain something that is box office magic, showmanship!

When you have two athletes who have a combination of body beautifuls, exciting all-in wrestling style, colourful ring attire, plus an ability never to be at a loss for words, either on camera, so the saying goes, or off. You have the makings of two very sensational wrestlers; they are the sensational Fargo Brothers, Donny and Johnny, the Mister Americas of the Mat.

Many fans will remember the original team of the Fabulous Fargos back in the early Fifties through to 1960, Jackie and Donny. They were a household word in their hey-day and wrestled in every major sports arena across the country. They were the bleached blonds of the mat, the wonder boys of wrestling. They brought the game back to the old Garden in 1957, drawing a capacity house of 21,000 people and a gate of $61,000.00. They were hot and they loved being in the limelight. Then, in 1960, in New York, they ran into serious trouble with the team of Argentina Rocca and Miguel Perez. They were consequently suspended indefinitely in New York State and many other States upheld the suspension as well.

Jackie had saved a lot of money and quit wrestling shortly afterwards and went into the night club business as well as becoming a disc jockey. The name Fargo was not allowed to appear any longer and Donny subsequently donned a mask and wrestled under a pseudonym in order to continue earning a living as a wrestler. Then he chucked his mask, got another partner and they wrestled down in Texas as the Daltons and did very well for about three years.  The Daltons sold out houses and got people nervous. They were a big thing. During this time he and his partner also became the World Tag Team Champions. All this time the fans never knew he was a Fargo, not even the promoters or the commissioners. They fooled everybody. Then there was another lull. Donny next came into the wrestling limelight when he grew long hair, sideburns and a beard and as Jack Dillinger wrestled as one half of a new tag team known as the Chain Gang and did equally well for himself. But tragedy struck. His partner was shot by an insane fan and consequently could never wrestle again.  During those years the name Fargo was still under suspension.

However, there was a younger brother named Johnny who was trying to break into professional wrestling. He had done very well as an amateur, but on turning pro, ran into some promotional hassles due to his incredible resemblance to the great Johnny Valentine. Promoters insisted he wrestle under fictitious names such as Greg Valentine, Johnny’s younger brother and Johnny Valentine Jr., his son. This caused a lot of friction with Valentine and understandably so. The younger Fargo also wrestled for a while as “Baby Face Nelson.” All this time he was biding his time awaiting to take his true identity.

Finally the suspension was lifted on the name Fargo and Johnny at last joined his older brother Donny to make the name famous in the wrestling world again.

They have been working together for about a year now and soon after teaming they captured the NWF Tag Team Championship by defeating the team of Tony Marino and Tony Parisi. At the time this story is being written they are firmly holding on to their valued tag team belts.

The word showmanship was emphasized earlier in this article. If ever two wrestlers truly possessed all the attributes of great showmen the Fargos are the men. To see them in their dressing room before a match is a unique experience in itself. Donny is a past master of the ad-lib and often has the other wrestlers in his dressing room practically falling on the floor with his zany wit and posturings. Younger Johnny, although somewhat more reserved, cannot help being influenced in this view by his brother.

During TV interviews, they take over the play from the announcer and completely disrupt everything else that might be going on. They are loud and very boisterous and have the ability to undermine their opponents’ abilities. Many viewers find this darn right shocking, and often reeking from racial overtones. In a taped telecast from Buffalo on Channel 29, they wrestled Dominic Denucci and Luis Martinez. The match got so out of hand that the studio it was being taped in became a bedlam. Tables were thrown around, a microphone was torn from the announcers table by a Fargo for use as a weapon and a fan was hurt by a flying chair in the ensuing aftermath. To watch the Fargos in pre-bout action is like taking a look back into the past at such greats as The Gallagher Brothers, Gorgeous George or Nature Boy Buddy Rogers.

They make a production out of such a simple thing as taking off their jackets, but the crowd loves it. They methodically fold them all the while sneering at their audience and undoubtedly imitating their opponents. Next, they take turns rubbing baby oil onto one another’s shoulders and arms. Finally, they remove their Tag Team Championship Belts and dismiss their second away in an alert manner. Once the bell rings, however, they are all business and work together with a precision that is a thing of beauty to behold. They tag constantly, thereby keeping their opponents off balance and confused, their speed and timing is fantastic.

The Fargos are currently wowing fans and selling-out houses in Montreal, Upper New York State, Pittsburgh, all through Ohio and West Virginia. Their main ambition right now is to get back to Madison Square Garden and take on the top teams in the WWWF. If destiny takes a hand in the career of the New Fargo Team, they may truly be known once again as the wonder boys of wrestling.