Before he was ‘The Hammer’, Valentine was Johnny Fargo

Greg Valentine looks back on his years as Johnny Fargo, teaming with Don Fargo, as a time chock full of valuable lessons, both in the ring and on the road.

The original Fargos — Jackie Fargo and Don Kalt — were a sensation from 1956 to 1960, from New York to Georgia to the Carolinas to Tennessee. Even after they went their separate ways, they reunited in the south from time to time and had another huge run in Tennessee in 1964-65.

Don recreated the Fargos with a boyish Greg Valentine in Texas and the Great Lakes area in 1971 and 1972. 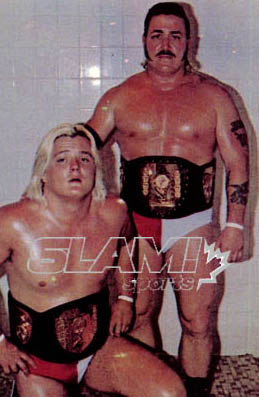 According to Valentine, Don Fargo had been lobbying for his partnership.

“I was in Detroit, by myself. My dad had sent me into Detroit after I finished up in Calgary. That’s where I ran into Don,” said Valentine. “Don kept bothering The Sheik, saying, ‘I’d love to have Greg as my partner.’ We did the storyline with me as Johnny Fargo. That’s how we got started.”

Valentine’s father, Johnny Valentine, had known Fargo from years before, and despite his misgivings about the wildness of the man himself, figured he could help his son who had yet to assume the family’s wrestling name. (Their given name was Wisniski.)

“He really got my feet good and wet, which is really hard to do. It’s a real hard business to learn. We took right off. My dad, I don’t know, he had some disagreement with Fargo years ago over something. He said just watch out, because he’s a little bit crazy,” said Valentine. “I saw that side too. Actually, Donnie was fine with me. He kind of calmed down. For Christ’s sake, I was 21 or 22, and he was 47 or 48.”

Fargo had been in the business and worked on top in Madison Square Garden. He knew how to be a star, and how to live like one.

“He was a great worker and I learned a lot from him. Anybody who’s breaking into this business, if they can tag up with someone 20 years their senior, and you can just suck all of the experience right off of them, which I did. He really helped me out a lot,” said Valentine.

There are many Donnie Fargo stories out there, and many of them involve nudity and other wacky stunts.

“Don had this thing for midgets,” explained Valentine. “If they were in our dressing room, he would take their shoes while they were out in the ring and nail them to the ceiling. He was a prankster.”

There’s a famous incident from 1972 in the National Wrestling Federation, with the Fargos. The SteelBeltWrestling.com website described it:

A midget gets bloodied. Midgets wrestling was always a staple in Buffalo. A rare mixed-midget match came on Sept. 23 when the full-sized Fargo Brothers faced Dominic DeNucci and the pint-sized Sonny Boy Hayes. In the third fall, the Fargos began picking up Hayes and dropping him to the mat. DeNucci punched the referee as his team was disqualified, and Hayes then stumbled around the ring until he hit his head on the ring post and came away with a giant gash. DeNucci carried Hayes to the dressing room and one NWF correspondent on the scene reported part of Hayes’ nose was hanging on to his face by the skin.

Valentine hadn’t thought of the attack in years.

“Actually, Fargo stole that from a page out of the book of Dick the Bruiser, who did that. There was a guy called Little Bruiser, and they gaffed him and he was bleeding all over the place. So he came up with the idea to do it in Buffalo,” laughed Valentine. “It was pretty gross.”

But it wasn’t just the midgets that got bloodied.

The Fargo combo almost got the NWF booted off local TV after a bloodbath with Chief White Owl and Don Serrano. “Don Fargo went crazy with the blade that day; he was taken to the hospital afterwards and required something like 20 or 30 stitches,” said NWF executive Ron Martinez in The Pro Wrestling Hall Of Fame: The Tag Teams. “The guys actually slipped around in his blood; it was so gory it looked like a horror movie. Channel 43 [in Ohio] received something like 100 phone calls complaining about the gore. We nearly lost the TV show over that one.”

Eventually, Valentine got away from full-time travel with Fargo.

“I traveled with him a lot and it was fine for a while. We lived in Buffalo, New York, and I had my own place. Then I got married, so I didn’t have to be with him all the time,” recalled The Hammer.

The duo split, for the first time, in the Lone Star State.

“When I found out he was making more money than me down in Texas for the Funks, I got really mad about it, and we had a fight. I broke up with him and I went to Dallas,” said Valentine, continuing his recollections. “I roamed around on my own and all of a sudden I’m back in Buffalo, and the promoter there, Pedro Martinez, put us back together. So that was alright there for a while. I really can’t remember why we broke up the second time. I think it was just the territory, the Buffalo, New York, territory, going belly up. I was up in Toronto. Don left and I was working for the old Bearman, doing the Toronto stuff. I met Jack Brisco and he brought me into Florida as Greg Valentine, so no more Fargo.”