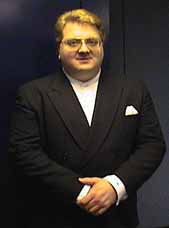 Carl Demarco was the president of the Canadian arm of the World Wrestling Federation, from June 1995 until 2009.

Before being appointed, he was the business manager for Bret ‘The Hitman’ Hart for five years. The two first met when Bret was first trying to break into the NWA in Toronto. According to Demarco, they’ve been “best of friends ever since.” Demarco is the “historian” to Bret’s career in many ways, and has been to every match Bret has ever wrestled in Toronto.

Demarco grew up in North York and went to Dante Allighieri separate school at Dufferin and Lawrence. He transferred to Stephen Leacock Collegiate because of its terrific TV broadcasting program. At Stephen Leacock, he was in a co-op program, and was placed at CFMT-TV in Toronto. Demarco stayed there after finishing the co-op term.

Next up for Demarco was Business Administration at Sheridan College. While enrolled there, he owned and operated a security company. Later, Demarco ran a night club and a direct marketing production company.

Outside of wrestling, Demarco sat on the boards for the Easter Seals, Special Olympics and the Parc Foundation.