Eddie ‘The Brain’ Creatchman was one scrappy manager 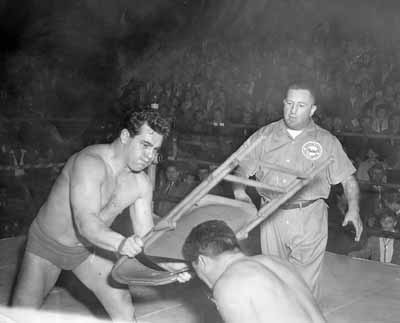 Best known for his cigar, sunglasses and Star of David, Eddie Creatchman was a long-time manager on Quebec’s International Wrestling circuit. He made his fame managing The Sheik and Abdullah the Butcher throughout the province. In fact, he was so successful managing the Sheik, that there was a riot at the Montreal Forum in 1970. Of course, that impressed the Sheik, and he brought Creatchman to Detroit to manage him. 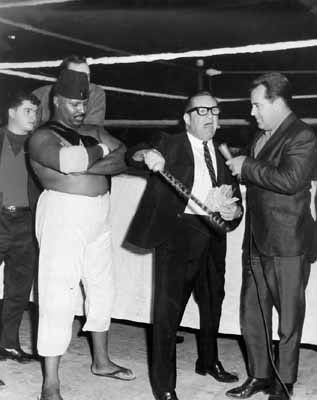 He started in the wrestling business as a referee in the late 1940s. Besides The Sheik and Abdullah, The Brain also managed Tarzan ‘The Boot’ Tyler, Don Leo Jonathan, Gilles ‘The Fish’ Poisson and Crybaby George Cannon. 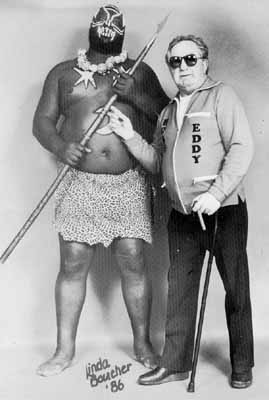 Outside the ring, Creatchman owned a scrapyard — evidently a lucrative enough business to provide him a Cadillac to get around in. He married Goldie in 1949, and together they ran the scrapyard. She passed away in 1985. 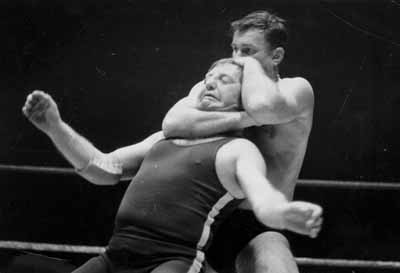 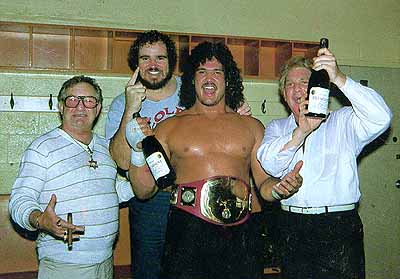 Thanks to Cheryl Creatchman Silver (daughter of Eddie & Goldie Creatchman) and granddaughter Alissa Silver for helping with these bios and the photos. 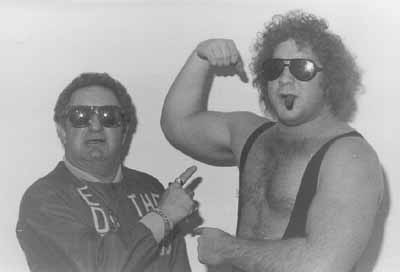 Until his untimely death I am proud to say that I worshiped Mr. Creatchman as my own personal God.
Dave Levinsky, Winnipeg

I used to sit front row ringside at the Sudbury arena when International Wrestling was in town during the mid-eighties. I remember Floyd and Richard the Boss always working the crowd during their matches. The funniest was when The Boss lost a match and Floyd had to wrestle. He had no trunks so he had to wear a bathing suit that Abdullah would have found roomy. The suit went up to his nipples and was blue and pink in color the crowd roared with laughter, and also made me roll on the floor with hysterics. I also had a spitting match with Eddie after he double-crossed the fan favourite at the end of one international match. We were spitting back and forth until an usher told us to knock it off. I often wondered what happened to Floyd after International folded
Terry Fielding, Sudbury Ontario

When I was about 7 years old my father, Kurt Von Hess, was wrestling in Montreal. We had just moved there from Calgary. Eddie was my dad’s Manager. Wow what a character. Star of David, Cigar, Big Glasses, deep voice. This was no act, he really was like that. He would come to our house to pick my dad up in his big car and always made a point of coming and saying hello, asking how school was, when am I getting married (a joke of course for a girl of seven). And he would always give me a roll of lifesavers or a dollar. My whole family have always had nothing but kind words for this gentleman. My father used to tell the funniest stories of being on the road with “The Brain”. In an ironic twist my father died of a sudden heart attack March 13, 1999 at the young age of 56. I hope they meet again someday in spirit and reflect on the two wonderful lives they had.
Best Wishes to the family, Paige Von Hess (Now Sutherland)