“Wrestling was in Floyd’s blood, heart and soul,” said his niece Alissa Silver. “My uncle was a hell of a lot more original than these every day people… from his taste in cars, clothes, furniture and thoughts.” 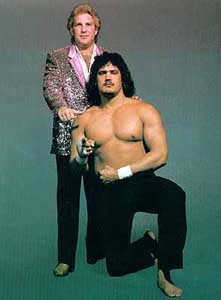 Though never a star at the wrestling-side of the business, like his father, Floyd had enough training in the ring to be able to take the falls safely, and to make them look convincing. Father and son even had feuding stables for a time in Detroit.

“I didn’t know Floyd very well — he wasn’t in that much or that long and to my recollection never worked other towns in the territory besides Detroit,” recalled Terrance Teagarden, who was a ring announcer in Detroit and worked behind-the-scenes in the promotion as well. “Seemed like a nice guy, very polite and a hard worker.”

In International Wrestling, the Pretty Boy’s stable included Hercules Ayala, Sweet Daddy Siki, Pretty Boy Simms, The Great Samu, Richard Charland and Shiek Ali (Stephen Petitpas). He also hosted a Piper’s Pit-type segment, and sometimes billed himself as a “sports agent” rather than a manager. On June 30, 1986, Creatchman managed The Great Samu to a victory over Dino Bravo for the International title at the Paul Sauve Arena. His tag team of Charland and Ali also held the International tag belts.

In 1985, he even made a short run in Memphis as Leslie Floyd Creatchman III, lasting about three weeks. According to Avruskin, the younger Creatchman was brought in by Vince McMahon for tryouts in the WWF on a couple of occasions.

The only son of the late Eddie and Goldie Riesler Creatchman, Floyd is survived by his sister Cheryl, his niece Alissa Silver and his nephew Joel and his caregiver Rhoda. He was buried at Montreal’s Mount Pleasant Cemetery, in the Radomer Society Section, on Monday.