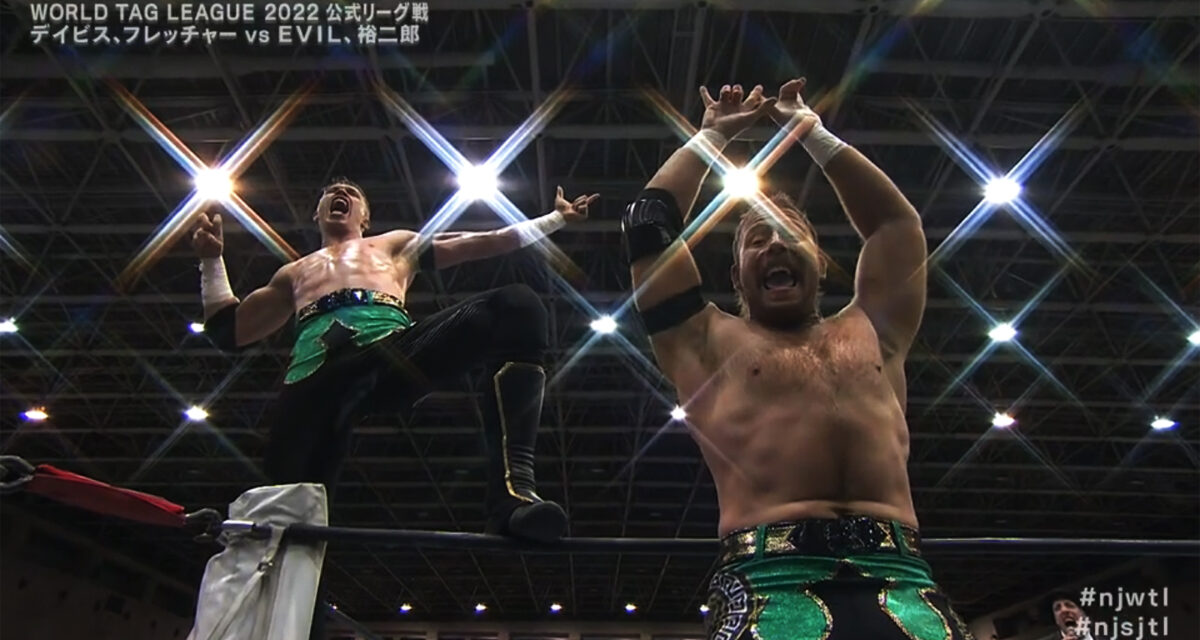 Aussie Open has extended their lead in the World Tag League tournament with a complicated win over The House of Torture on night six.

The fight goes back to the floor where Evil slams Mark Davis into the barrier which then hurtles backwards taking out the time keeper’s desk. Togo hands Evil a t-shirt which he uses to strangle Kyle Fletcher. House of Torture cuts Fletcher off from Davis.

Sick of Togo’s constant interference Fletcher kicks him off the apron. Aussie spikes Yujiro as Fletcher hits him with a cutter from the second rope. Sho and his wrench arrive to cause more distractions. Evil shoves Aussie into the official.

“Lord” Gideon Grey gets involved attempting to stop the swarming. The Great-O-Khan rushes the ring blasting House of Torture driving them off. Yujiro brings his cane into the ring. The official wrestles him for it and wins. As the official deposits the cane out of the ring Grey jumps back into the ring kicking Yujiro in the “lower abdomen”. Yujiro is pinned by Corealis.

Tomoaki Honma and Ryohei Oiwa submit to double Boston Crabs from the competition.

Connors brings a beer for himself and Wato. He gives Fujita a bottle of water. Connors takes a big, big swig of his beer before the match begins. Kanemaru makes Fujita submit to his figure four.

Takagi brings his KOPW trophy to the ring. It has been put back together for the thousandth time. Gedo retrieves his brass knuckles. Shingo ducks Gedo’s swing. Hiromu kicks Gedo in the gut. Los Ingobernables all clobber Gedo in a corner. Hiromu kicks him again. Shingo pins Gedo with a Pumping Bomber.

Goto tries to knock The Ace off the top rope. Yano punches him in the “lower abdomen”. Yano powerbombs Hashi. The Ace pins Hashi with High Fly Flow.