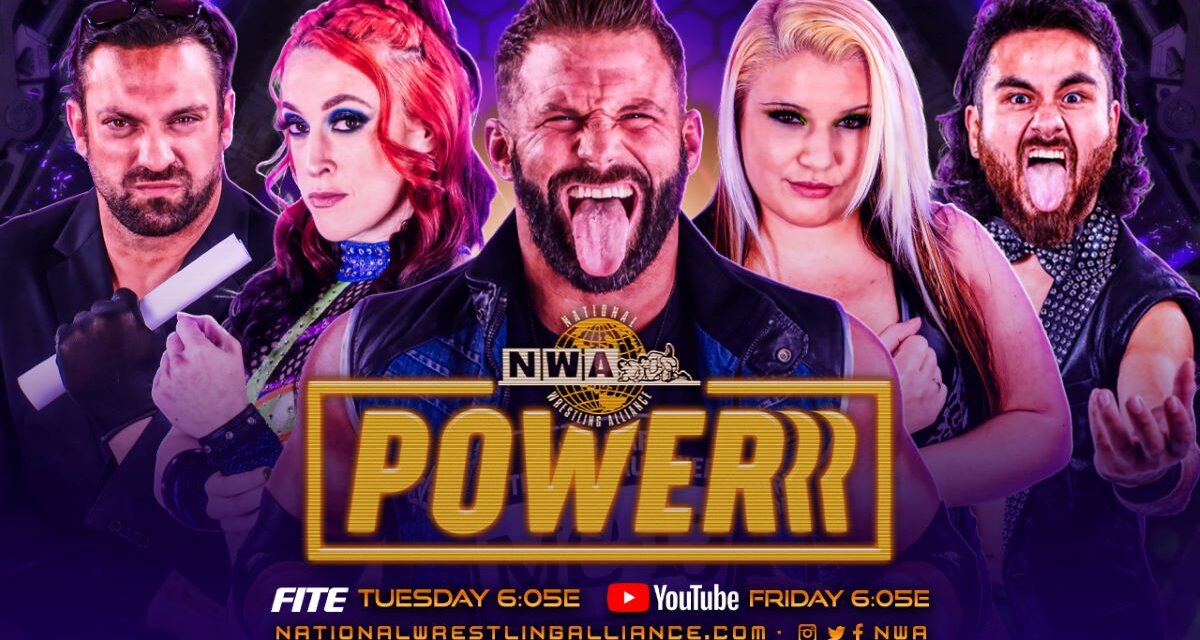 Matt Cardona has a small thorn in his side since coming to the National Wrestling Alliance, and his name is Rolando Freeman.  He’s got two wins over the former heavyweight champion, and that leads to tonight’s main event between Mike Knox and Matt Cardona against The Spectaculars.  If the Cardonas win, they get five minutes alone with Rolando Freeman; but if the Spectaculars win, Rolando gets Cardona one-on-one with Cardona’s next NWA World Title opportunity on the line.

We’ll see what takes place as we come to you from the Frederick J Sigur Civic Centre in Chalmette, LA.  Joe Galli, Tim Storm, and Velvet Sky have the call as we start off with… 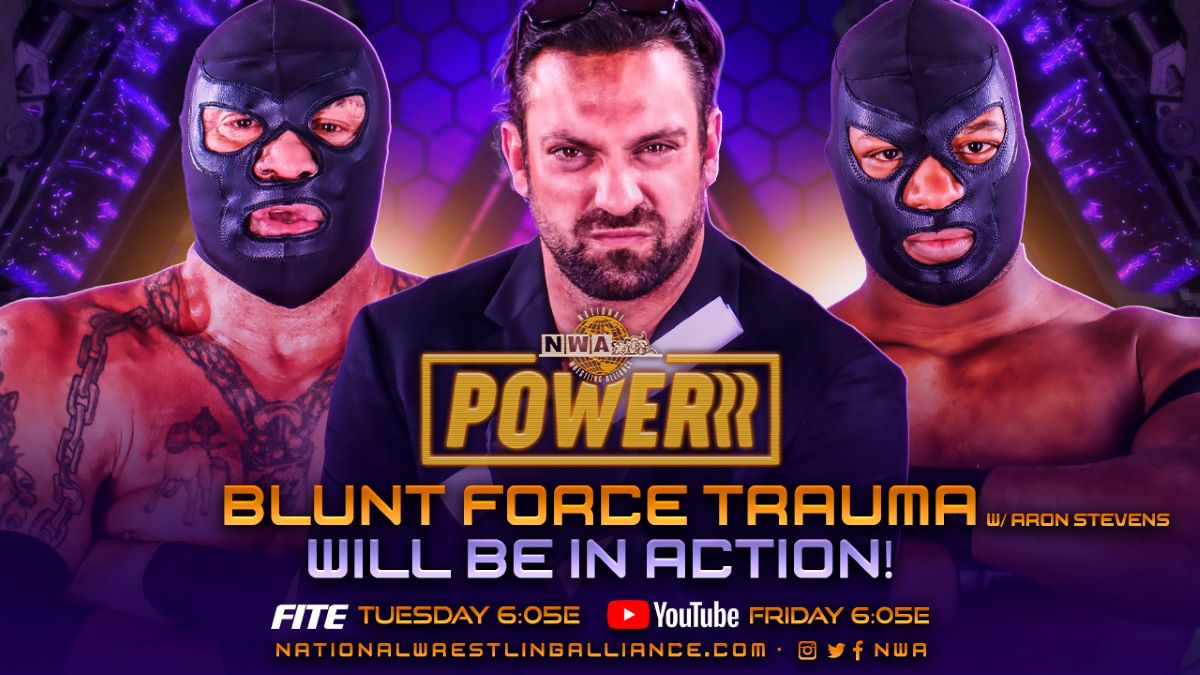 The poor saps in the ring are part of Wildkat Sports Wrestling, still hosting NWA’s PowerrrTrip segment.  As for this match, this squash is brought to you by a Haiku in Review™:

I said it before and I’ll say it again for this DOOM-inspired team (which is Rodney Mack and Marshe Rockett under masks); somewhere Ron Simmons is saying to Butch Reed after looking at this team, “DAMN!”

Kyle Davis is in the ring with Baby Doll and her daughter, Samantha Starr. Doll has an announcement that she is not yet ready to announce, but makes it clear she and her daughter have to take care of King first.  Doll also wants to be addressed going forward as the First Lady of the NWA because she deserves it.  As for Starr, she is a third-generation star and she wants to finish what she and King started, so let’s get straight to that match between… 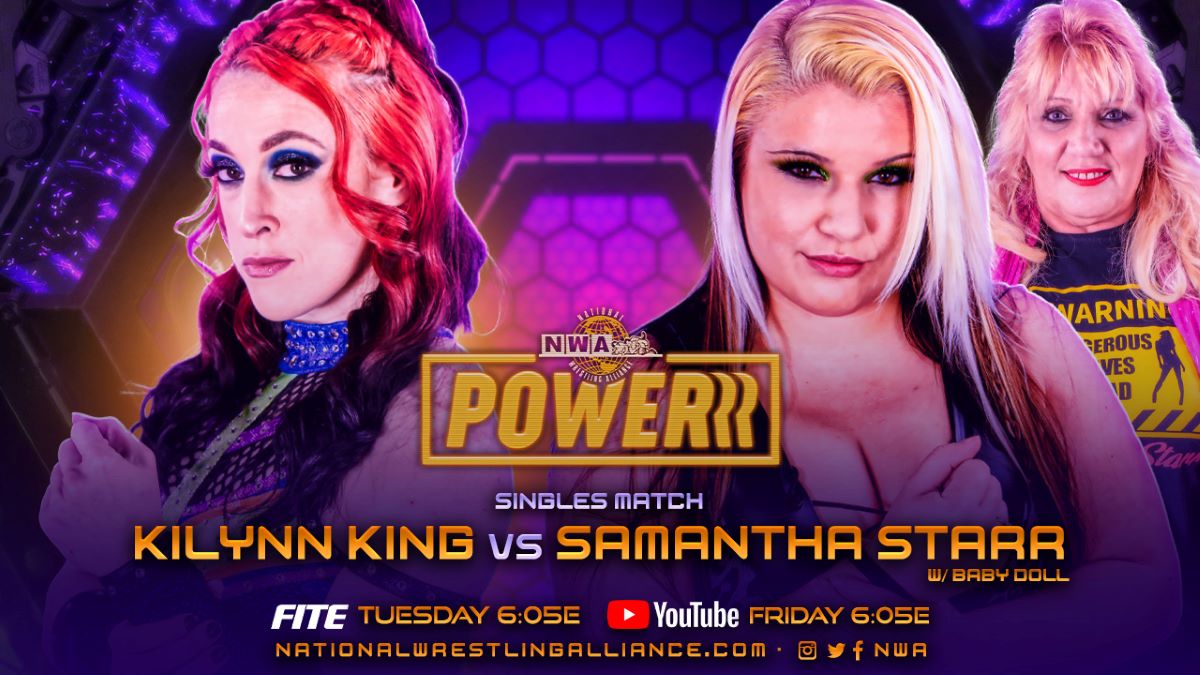 Quick Note:  Whoever’s working the fog machine got a little overzealous, as it was hard to see King’s entrance.

As for the match, Starr starts strong but King has the height and reach advantage, but Starr is no pushover (literally) as she doesn’t budge when King tries to do a shoulder tackle.  A dropkick by King and Starr confers with mama Doll on the outside to reconsider the strategy.  Back in the ring and both women do a test of strength, and neither one overcomes the other. Each attempt a suplex, but it’s King who wins that round.  Starr gets her in the corner with her forearms and then charges at her, but King leaps out with a kick, and then a rising knee.  King rushes but eats a back elbow and then a snapmare followed by a stiff kick from Starr. She rams King’s head using her knees as a fulcrum and then covers for a near fall.  A roundhouse kick by King, and Starr answers back with a boot and a bulldog for another two count.  King chops and rushes with a clothesline to a DVD and gets a two count of her own.  She attempts to set up her Excalibuster finisher but is blocked by Starr who plants her with a Samoa Drop.  She covers, but King kicks out at two.  Starr attempts a DDT but gets blocked and King delivers with the King’s Landing (a full Nelson to a back body drop slam) that gets the win.

Your Winner via Pinfall:  KiLynn King

May Valentine is backstage with Mercurio and Big Strong Mims.  They talk about being in entrants in the Revolution Rumble coming up this Saturday on NWA USA, and whoever wins will be guaranteed a future shot at the NWA Heavyweight title. Mercurio mentions there’s a lot of seafood in New Orleans and he hates that it smells like fish.  Mims, on the other hand, acknowledges the haters and loves the people of New Orleans, and wants to knock down the haters…especially the ones that hate fish.

Now for something different, it’s time for the first of this double Main Event, with… 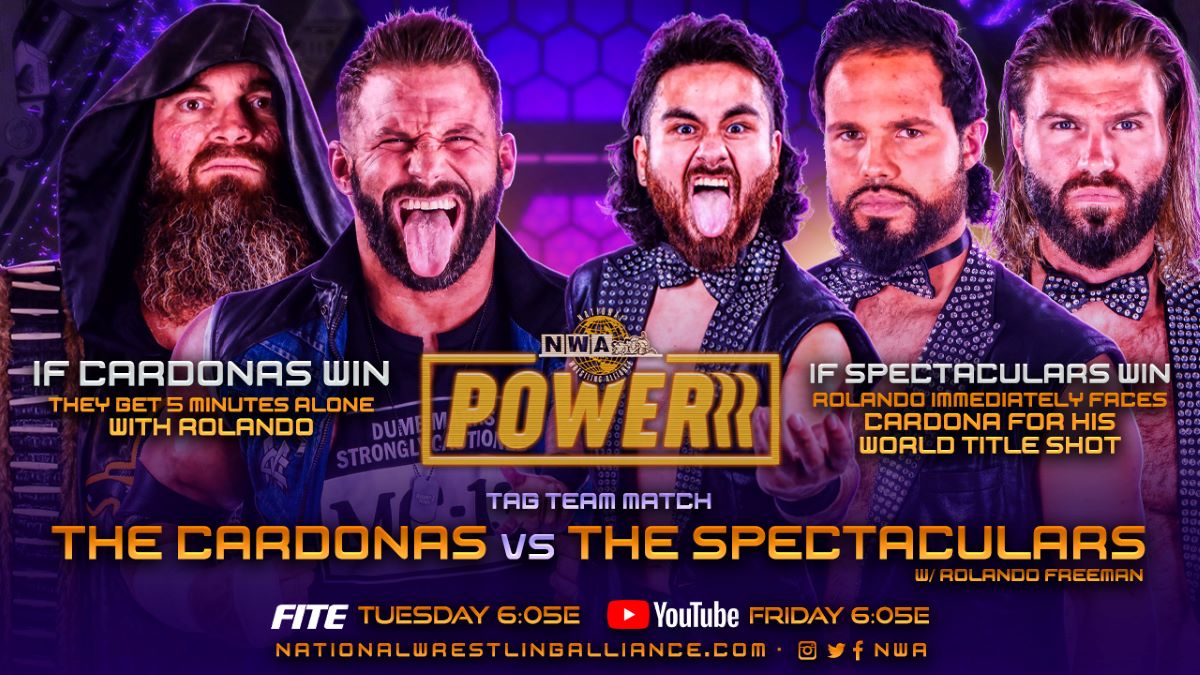 Rush and Knox start the match, and they trade moves but Knox gets the upper hand with a shoulder tackle and a slap to cover for a two count.  Knox is toying with Rush, but then he gets some arm drags in on the big man, and sends him to the corner. Tag to Pierce and continues to control the arm of Knox, and The Spectaculars utilize quick tags as they continue to target the bad arm.  A double hip toss to Knox and they send him out of the ring. Cardona comes out and an atomic drop/thrust kick sends him out, too. Then comes a Spectacular Strut by all three men in the ring, and Cardona and Knox rethink their game plan.

Cardona is in and gestures broadly to learn the Strut. As Rush shows him, Cardona tries to kick him but gets caught in the act.  Cardona sends him to the ropes and Knox hits him in the back.  Cardona dumps Rush outside the ring where Knox cheapshots him away from the ref’s notice.  From there The Cardonas isolates Rush in the corner and he is Spectacularly in Peril.  Knox tags back in to administer more damage, and then Cardona comes back with a forearm to the face.  Knox is back in with elbow drops to Rush and a cover of two.  He whips Rush to the ropes and both men double-clothesline each other.  Rush crawls to the corner to make a hot tag to Pierce and he is Spectacularly en Fuego.  It’s bedlam in the ring and at one point, Cardona attempts Radio Silence but Pierce catches him and nails a powerbomb for a pin,  and Knox takes his head off.  Rush comes to his tag partner’s aid and Cardona sends him out of the ring, where Knox is waiting and throws him right to the guardrails.  Rolando goes to check on him, and Knox hits a big boot to the Freeman “big brother.”  Back in the ring, Cardona lights up Pierce with Reboots, and Knox holds him in place, but the ref sees this and calls for the bell because…

Your Winner via Disqualification:  The Spectaculars

Cardona is beside himself and tries to argue his case, but it doesn’t matter, since the decision is final.  We’ll get to that match in a minute.

There is a replay of Natalya Markova and Ella Envy’s “match,” but read it here to see what you missed on the last NWA USA

Anyway, let’s go to the match in progress between..

Rolando is in the ring, and Cardona takes his sweet time facing him.  As he teases climbing between the ropes, Rolando goes after Cardona and battles outside the ring.  He drags him back in and Cardona delivers Radio Silence and that’s enough to knock him out for the one, two…kick out by Rolando.  Cardona sets him up for the Reboot and charges, but Rolando gets out and lands a stomp on his face.  He sends him out of the ring and follows with a DDT on the concrete floor. He pushes him back in for a pin cover and Rolando gets a two count.  Knox climbs up but Rolando sends him back down.  He turns and runs into a Cardona clothesline.  Now Rolando is pushed into a corner where Cardona puts the badmouth on him and mounts the ropes for punches to the top of his mulleted head, but he trips up Cardona and he lands hard on the mat.

Both men slug out, and Rolando nails with a headbutt, then palm strikes and a backfist, and a cannonball in the corner to finish, allowing him to cover for a close two count.  Cardona nails a lungblower to Rolando and attempts the Reboot, but he moves and nails a missile dropkick and then follows with a running flatliner for another two count.  Rolando signals for the big boot and delivers for a cover, and Knox puts Cardona’s leg on the bottom rope to break the hold.  The Spectaculars are still at ringside and they go toe to toe with Knox.  Rolando sees this and dives and all three men and then heads back into the ring for a back flatliner for another two count.  Rolando is fierce and then Cardona gets the ref in the middle.  As he tries to get out of the way, Cardona hits a low blow and now Radio Silence finally ends Rolando’s chances with a cover of one, two, and three.

Your Winner via Pinfall:  Matt Cardona

Cardona has redeemed himself against Rolando and still keeps his title shot in his pocket as the show goes to the credits.

Say what you will, Cardona brings out the best/worst in everybody and his mini-feud with Rolando Freeman was just what the doctor ordered.  Rolando is no slouch either, and he has the charisma to pull it off.  What lies ahead is another question for this Spectacular wrestler.