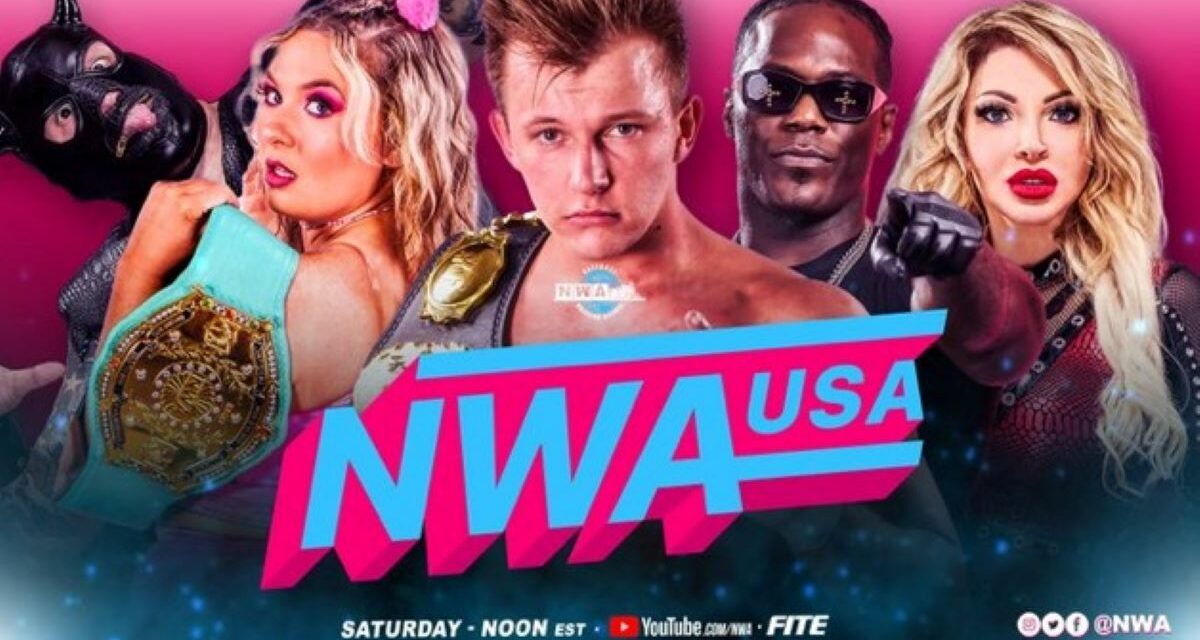 This NWA USA continues to roll through New Orleans, and Kerry Morton is riding high since claiming the NWA Junior Heavyweight title. But the Last Bastion or Professional Wrestling, Colby Corino, wants to claim that top prize for himself, and this is yet another attempt.

We’ll see if he’s able to get it later, but now we head to the Frederick J. Sigur Civic Centre in Chalmette, LA. Joe Galli, Tim Storm, and Velvet Sky have the call, and we go to the First Match of the night… 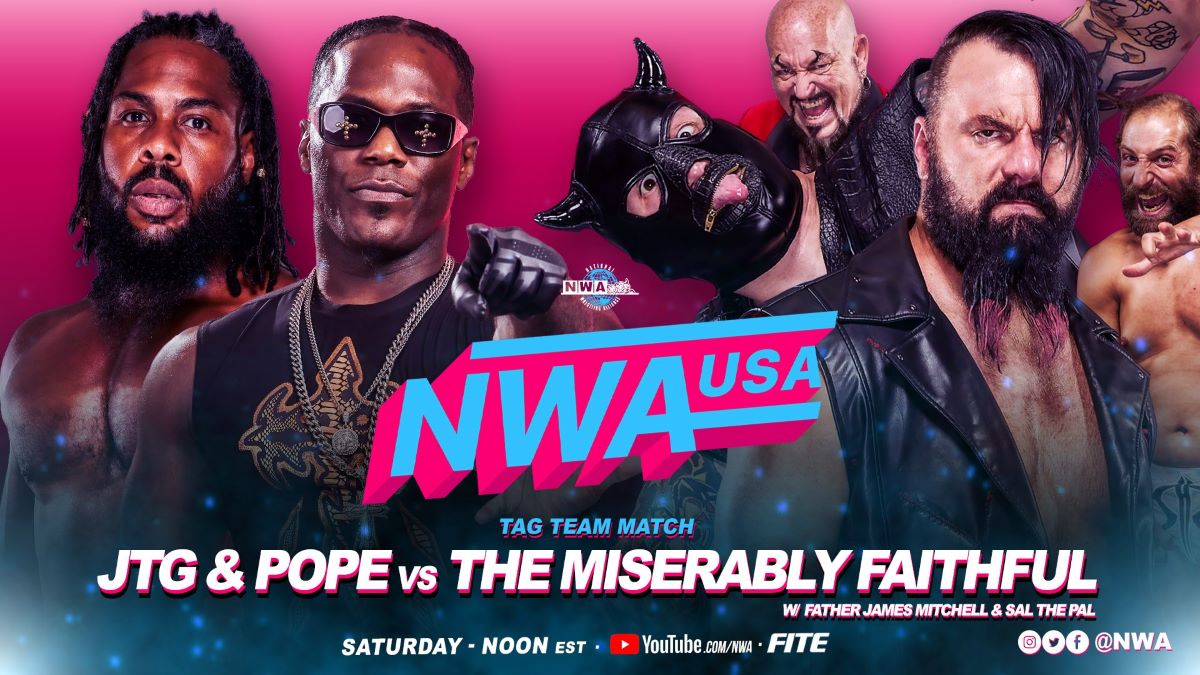 JTG and Pope vs. The Miserably Faithful (Gaagz The Gymp and Judais, with Father James Mitchell and Sal The Pal)

This is a new lineup change with the Miserably Faithful since there have been issues with Gymp and Sal of late.  Same things with JTG, who’s without his Dirty Sexy Dango, but sometimes change is good.

Gymp and JTG to start, but Pope comes in and he’s eyeing the weird little Gymp who starts to stick his tongue out, and Pope zips it back up.  Pope and JTG have good tag chemistry, but a horn to JTG’s eye distracts for a short bit until he comes back and nails a huge backdrop on Gymp.  JTG sends him to the ropes and there’s a blind tag by Judais, and Sal pulls out Gymp from under the ropes.  JTG tries to get him back in and the Priest of Punishment takes control.  From there, Jay is Tha Gawd in Peril but manages a sling blade to Gymp to get a breather and manage a hot tag to Pope and he is Pimpin’ en Fuego.  He keeps working on Gymp and sends him to the ropes.  Sal tries to pull him out from underneath the ropes, but Pope pulls Gymp and Sal into the ring and hits a DDT/ neckbreaker combo on both men.  Judais is back in and gets both Pope and JTG in a goozle, but they reverse it and send the big man over the ropes to the outside. Pope delivers the Elijah Express on the back of the Gymp in the corner and he covers for the three count.

Your Winners via Pinfall:  JTG and Da Pope

Afterward, The Miserably Faithful berate Gymp for the loss.  How long can a Gymp take such abuse?  The world may never know, but now we head to the next match… 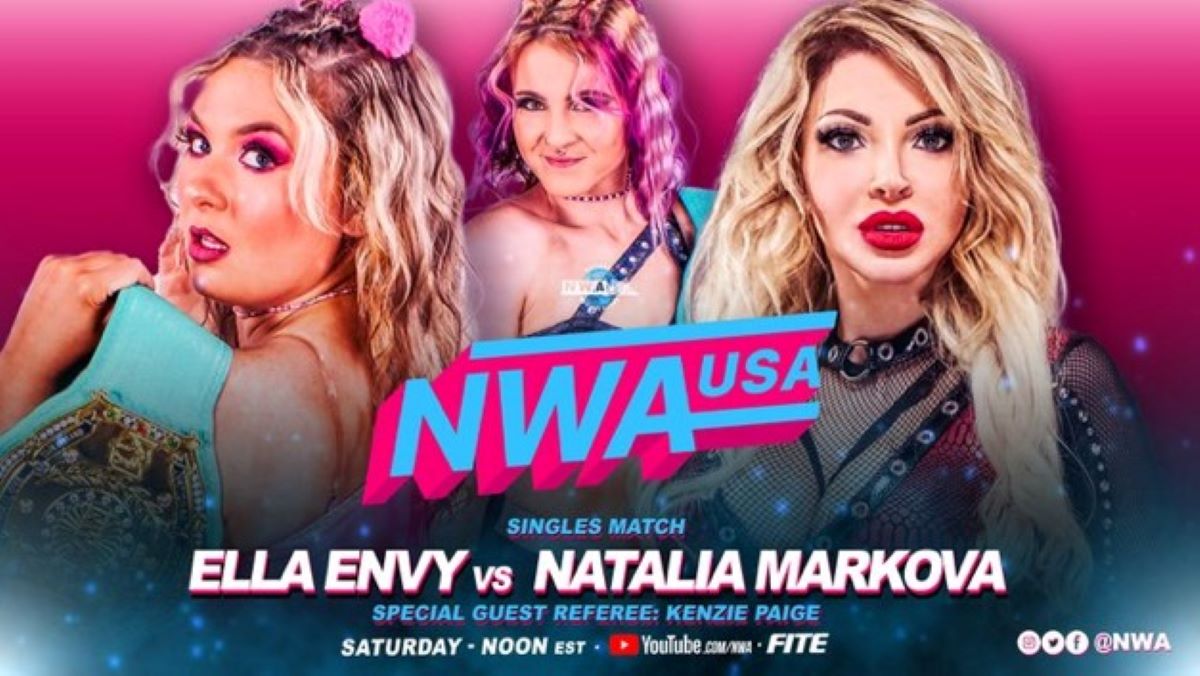 In the dictionary under “shenanigans”, it says:  See Pretty Empowered.  This match is chock full of examples of shenanigans as it appears the deck was stacked against The Crush.  At the start, Paige checks Markova for foreign objects to get in her head and then calls for the bell.  Every time Markova got a hint of offense, Paige tries to break it up to “keep it fair.”

As I said, shenanigans

Markova has had enough and slaps Envy hard, and Paige tries to enforce the law by putting her in a neutral corner to check on her tag partner.  As Markova comes out, Envy hits her with hair spray in the face to roll her up for a fast two count.  Markova sends envy to the corner and attempts the  Beautiful Disaster but misses, and Envy works on her ankle twisting it in directions it cannot go on the human body.  They both get in some “yay/boo” shots and then Paige shoves Envy into Markova to collide, and she lays her on top of The Crush for another fast two count.  Envy attempts a suplex but it gets reversed by Markova, and now she delivers the Beautiful Disaster kick. She covers envy, and Paige counts one, shakes life to Envy, a slow two count, and she pleads with her to wake up, but Markova makes her slap three on the mat to get the pin and the win.

Your Winner via Pinfall (Amidst Shenanigans):  Natalya Markova

May Valentine is with the new tag team of Blunt Force Trauma, Carnage (Marshe Rockett), and Damage (Rodney Mack), and their “ambition is to destroy the competition!”  It’s not DOOM, but it makes one wonder if Butch Redd and Ron Simmons aren’t watching this and going, “DAMN!”

Personally, I thought I heard “Blonde Force Trauma,” and that would be a tag team to have in the NWA.  Just a suggestion

There are highlights from NWA Powerrr as Jazmin Allure faced Kamille for The Burke, but read it here if you missed the action

Valentine is now with Baby Doll and Samantha Starr. We hadn’t seen them since NWA 74 for The Burke Invitational.  Doll has news for all of us as she is the designated First Lady of Professional Wrestling, and she’ll be guiding her daughter to the same stardom that she has over the years. Starr agrees that she was born for this and calls out KiLynn King and any woman in the NWA to throw down.

Speaking of throwdowns, let’s head ringside for The Main Event, and it’s for the… 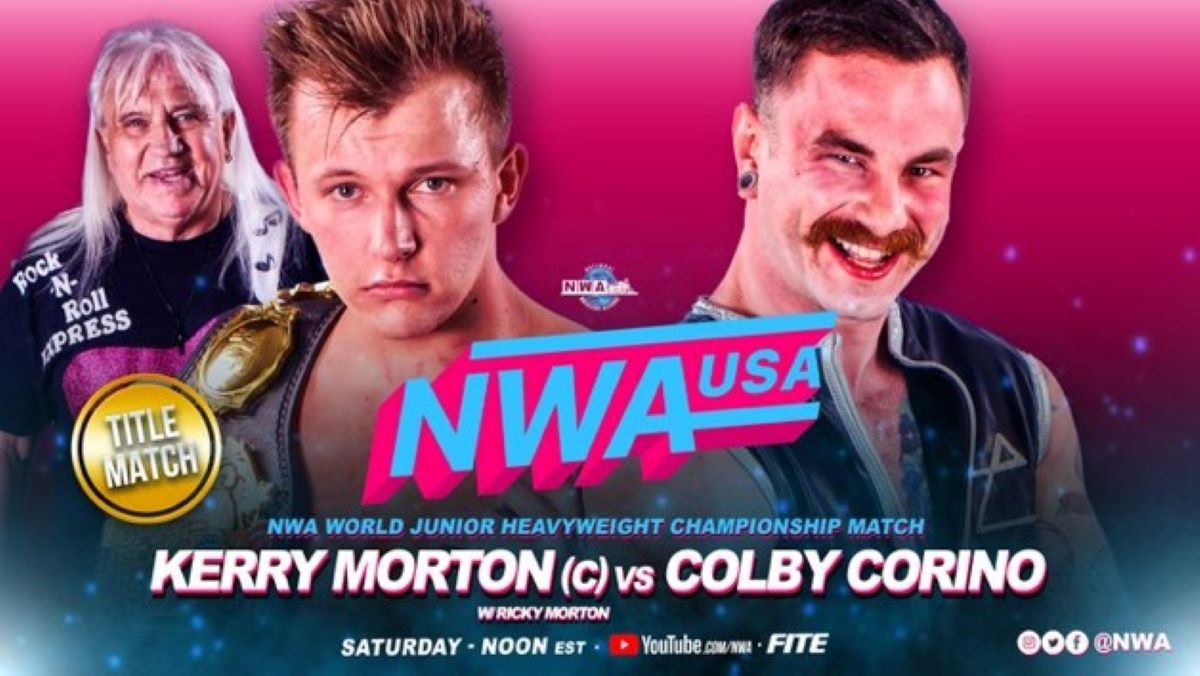 Corino has got a serious Snidely Whiplash ‘stache going on there, but equally disturbing is Homicide is out at ringside in street clothes and he points out he has his manager’s license, so he can be at ringside.  OK, let’s see where this goes.

As the bell rings, Corino charges and hits Morton with a dropkick and drives his shoulder into his sternum in the corner.  Morton is back in control with body shots but is distracted by Homicide’s antics outside the ring.  Corino uses the opportunity to get an elbow to his face, and then he drops Morton spine first on the top turnbuckle.  Corino keeps on the attack with a knee to his midsection and covers for two, then he nails the Colby Crush to his injured back and covers for another two count.  Corino has the lion’s share of offense with a tilt-a-whirl backbreaker to a suplex but still gets a near fall.  Morton starts to fire back with a spinning neckbreaker for a two count, and then they both land clotheslines to knock each other out.  Corino goes outside to catch his breath and Homicide cheers(?!) him on.  He then fist-bumps Homicide, and he gives him a one-fingered Bronx salute in return.  Corino is upset by that lack of respect, and Morton catches him with a rope-assisted DDT and then delivers the Kiss it Goodbye to Corino to cover for the one, two, and three.

As Kerry and Ricky celebrate with the fans, Corino is dejected by another loss at the title as the show goes to the credits.

A good show and Morton is growing into his champion role.  I am curious about what direction Corino and Homicide will take, but I’ll enjoy how it plays out. Also curious is what other shenanigans Paige and Envy will come up with next.

For now, See you next Saturday!