NWA POWERRR: Bumps, Bruises, and The Burke in the Big Easy 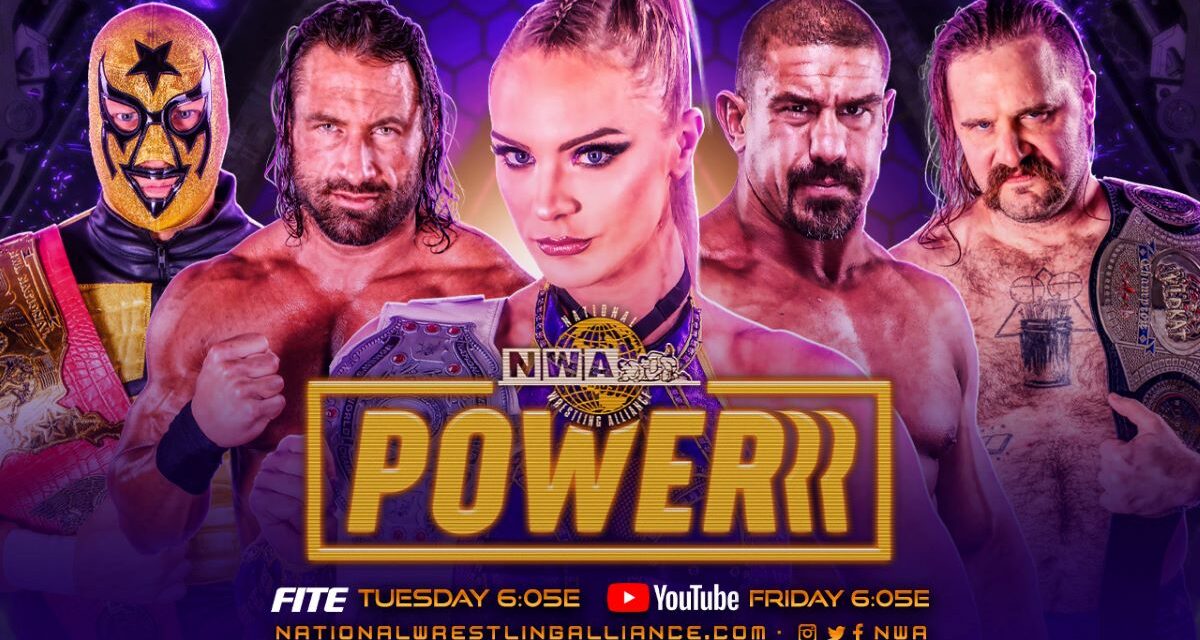 It’s not the humidity, it’s the heat coming from the action the National Wrestling Alliance is providing down in the New Orleans area.  Tonight’s card is no exception as wrestlers from Wildkat Sports will make their debut on this NWA Powerrr, and in the main event Kamille will put up The Burke in a title match versus another Wildkat alum, Jazmin Allure.

First, we go to Kyle Davis in the ring with Thom Latimer and EC3 to air their grievances as to when things got personal during their match at  Hard Times 3. Latimer starts and says he can talk about his addictions and limp d***, but draws the line when his wife is concerned. As for tonight, during the tag match, he promises EC3’s ass will be kicked. As for The Essential Character, he breaks the fourth wall again on the tag team match and the epic confrontation that is to come.  He concludes that between the two of them when that day comes, one will be changed forever, and one will be the future NWA champion.

We head to the Frederick J. Sigur Civic Centre in Chalmette, LA.  Joe Galli, Tim Storm, and Velvet Sky have the call as we dive into the First Match of the Night… 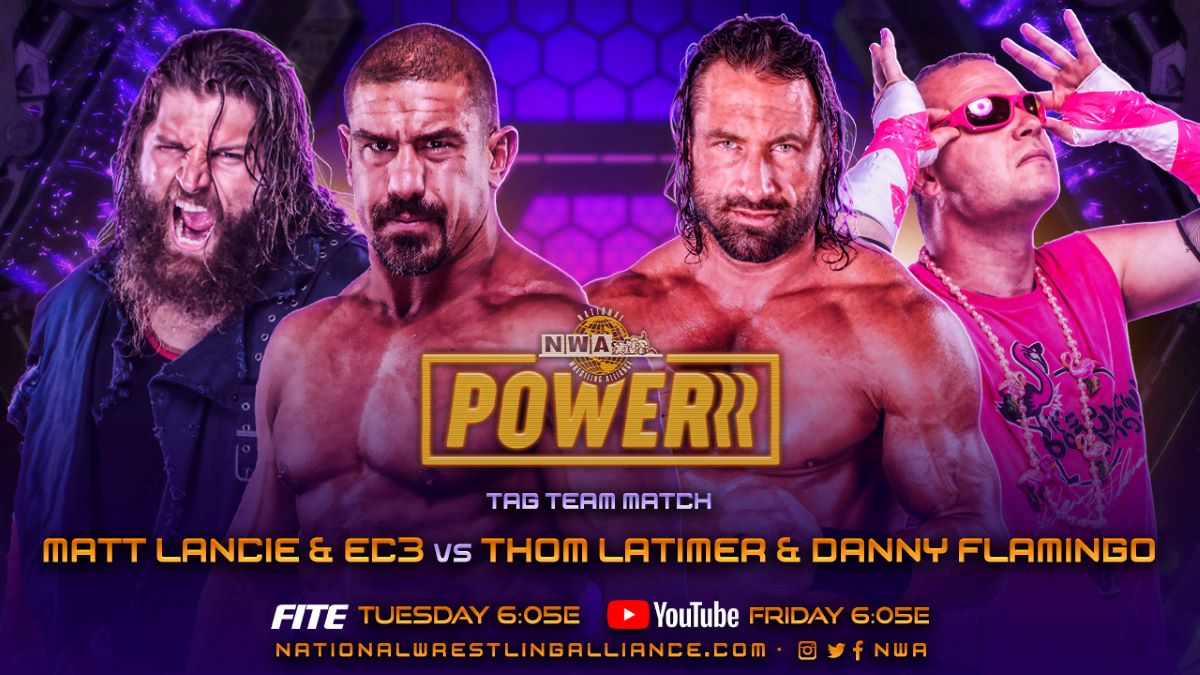 Latimer and EC3 are ready to start…until he tags Lancie instead.  Latimer isn’t happy with that and then The King of all Evil flattens him.  Tag to Flamingo, and the fan favorite nails a Flamingo elbow drop and stays on offense with Lancie.  Harper gets on the mat to distract the ref, and EC3 uses the opening to clotheslines, and Lancie takes over on the Prince of Paris Street.  He and EC3 double-team and keep him isolated in the corner, making him a Flamingo in Peril.  EC3 gets an STO to Flamingo and then stares at Latimer to get in his head. Back to Lancie with a huge clothesline and he covers for a two count.  Lancie picks him up, but Flamingo wriggles out and hits a high knee to his face.  A hot tag to Latimer and he is Evil en Fuego, and then throws Lancie into the corner as he dares EC3 to tag in. He comes in, delivers the One Percenter to Lancie, and feeds him to Latimer, and he promptly gets him center of the ring with a crossface as EC3 watches on and Lancie taps out.

Your Winners via Submission:  Danny Flamingo and Thom Latimer

Harper gets in EC3’s grill as he isn’t happy about this, but The Essential Character throws him in the ring.  Latimer cinches in another crossface, all the while staring daggers at EC3.  This is far from over.

Backstage, The Question Mark II is with students learning Mongrovian “Kuh-rah-tayy.” As he teaches the grasshoppers, he gets jumped by Stevens and company, and Stevens raves like a madman saying he never lied.

Now for some added gumbo for the hometown crowd (and yes, even *I* know how it sounds.  Just play along, huh?), it’s time for a title match for the… 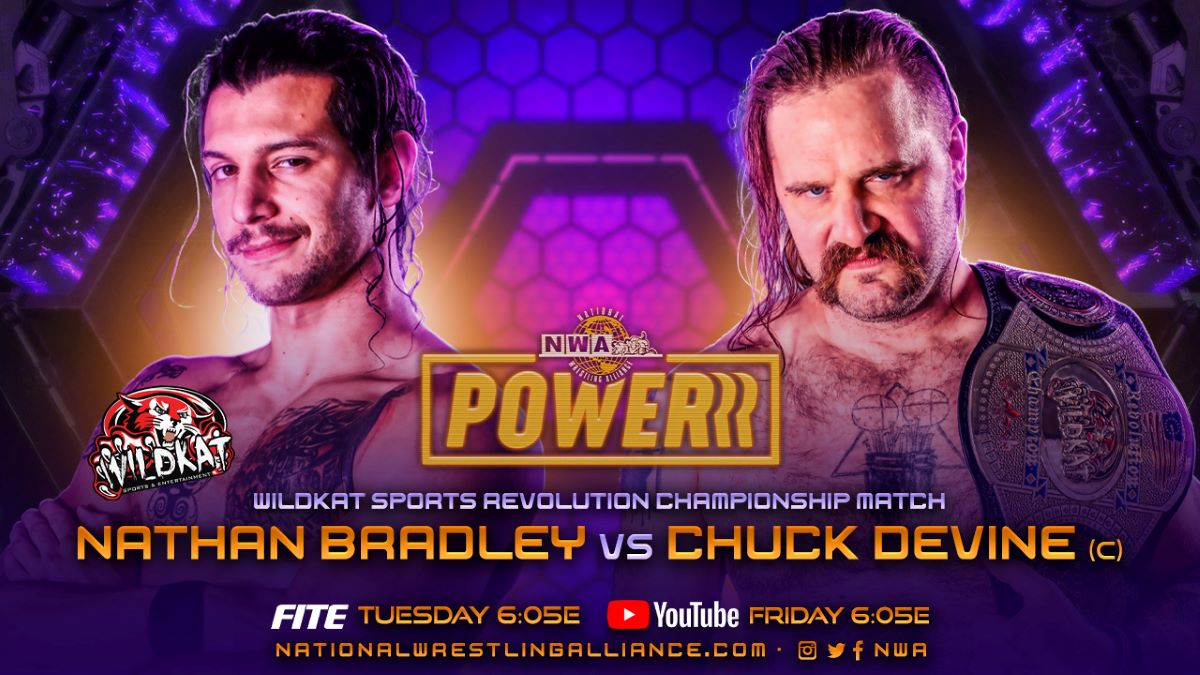 Galli tells us this is Bradley’s first title shot for the top prize in Wildkat Sports.  Devine has a size advantage and intensity but Bradley has the quickness.  Bradley demonstrates that as he lands a huracanrana to a dropkick to cover Devine for a two count and keeps on with a running kick in the corner and a suplex. He hangs on and goes for another suplex, but Devine reverses to a fisherman suplex for a near fall.  The larger Devine slows the pace and just grinds down the high-flying Bradley with a leg triangle, but he kicks out of the submission.  They go back and forth, and Devine nails with a roundhouse kick to a high back body drop and he covers for a two count.  He gets back his momentum and Bradley manages with a rollup to a double stomp to a moonsault for another two count.  Devine drives him back to the mat hard and goes up top but Bradley catches him and nails a huracanrana to The Grime.  He hits a springboard missile dropkick finds the mark and he follows with a shooting star press for another two count.  Bradley tries a rollup but gets pushed to the corner turnbuckles.  He is stunned and Devine adds the exclamation point with a Spike DDT to retain the belt.

May Valentine is with Da Pope and JTG.  She compliments both men on their Team War win alongside Anthony Mayweather at Hard Times 3. They got each other’s back, says Pope, and that will be the same case when they face off against The Miserably Faithful on this upcoming NWA USA.

Now we shoot to Thrill with a non-title match between… 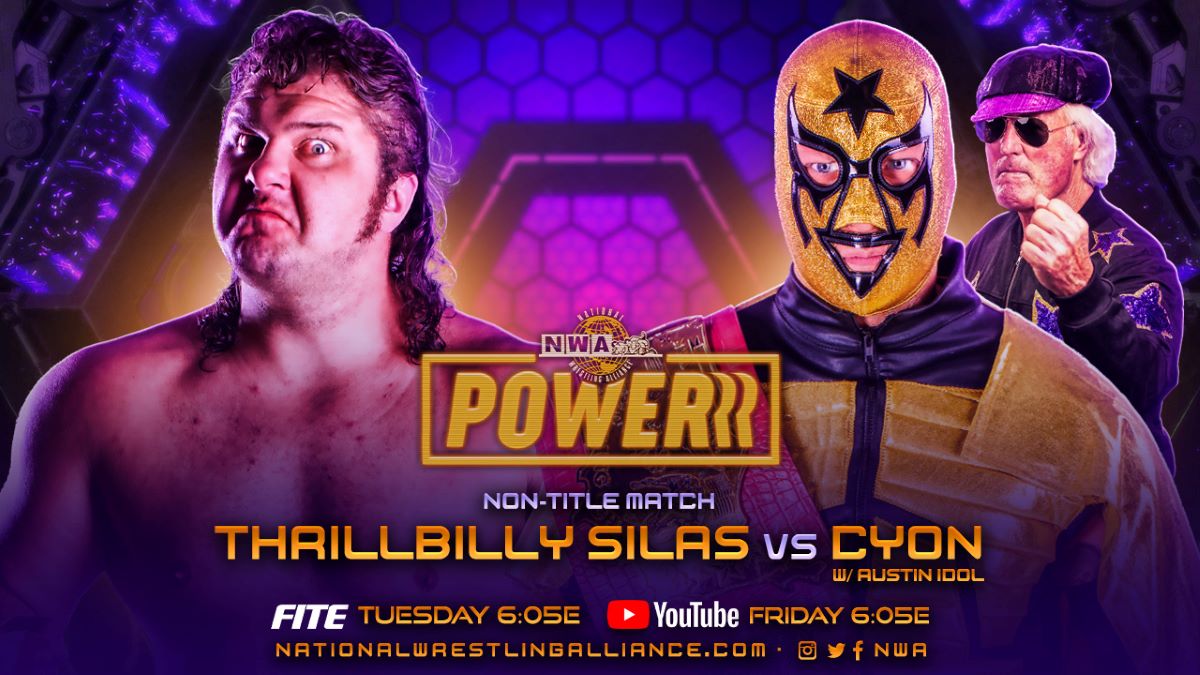 The Great Cyon (with Austin Idol) vs. “Thrillbilly” Silas Mason

Mason is fired up tonight, and Cyon is just as focused.  However, Mason is still missing his lovely lady, Pollo Del Mar, who’s stuck in customs apparently (boy, Qatar is not hospitable towards tourists, eh?)

In any case, Mason tosses Cyon to the corner and now the masked man reevaluates his situation.  Mason throws him around like a rag doll and Cyon takes a breather to confer with Papa Idol. Mason tries to bring him back in the ring the hard way, and Cyon stun guns him on the top rope.  From there Cyon throws a wrench in the Thrillbilly’s plans and even bites his head as he mounds the ropes in the corner, then pulls on his arms while standing on his hair.  It isn’t long before the momentum shifts back to Mason’s favor and nails snake eyes to Cyon on the top turnbuckle. He rushes into the corner and Cyon gets a boot up to knock him loopy.  He stacks up Mason and uses the ropes for leverage, but the ref doesn’t see as he gets the three count.

Your Winner via Pinfall:  The Great Cyon

Mason is enraged by the loss and screams as the masked man walks away, with him and Idol taunting him with the National title.

Backstage, Valentine speaks to the team of Ella Envy and Kenzie Paige of Pretty Empowered.  She congratulates them both on their tag title defense at Hard Times 3 but wants to know why Envy will have a match with Natalya Markova on the next NWA USA, especially when Paige will be the guest referee.  Paige is huffy that she’s being accused of cheating (I guess Valentine heard it from his ex-boyfriend) but states she will be impartial and call it down the middle. Envy doesn’t need to cheat, since she is a champ, and then they both leave since Valentine’s hands smell funny or something.

There’s a clip of Homicide going completely berserk on Jac Valor during the last NWA USA, and being called for disqualification which made him become more unhinged.  I would tell you to go to my recap, but because life got in the way (plus it was wall-to-wall AEW Full Gear Coverage), it got lost in the shuffle, so watch here, and comment, “Tommy Milagro sent me here.”

I ask so little.

Now we head ringside for the Main Event, and it’s for the… 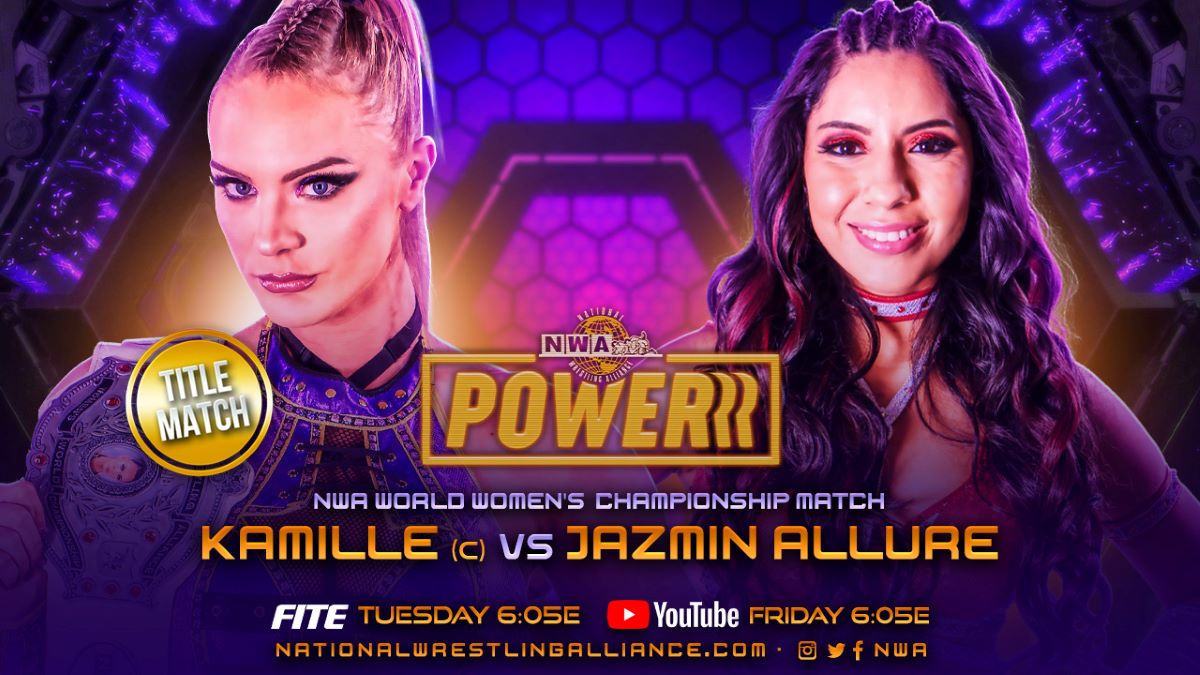 Allure, according to Galli, is a rising star at 22 years of age, and recently the Wildkat star took Serena Deeb to the limit.  This will be her biggest test to date facing The Brickhouse for The Burke.

Kamille gives a display of power and Allure tries to outwrestle her with speed and quickness.  Allure manages with a head scissors that almost doesn’t rotate, and then goes for a huracanrana and Kamille catches her and lands a wicked powerbomb for a two count.  From there it’s all Kamille offense with a series of gutwrench suplexes and then a nasty backdrop.  She whips Allure to the corner and rushes for a tackle, but she dodges through the ropes and attempts a crossbody but Kamille transitions to a slam for a cover of two.  Allure still has a few tricks up her sleeve as she knocks off the champ and gets o the top turnbuckle to nail a flying back elbow and both women are slow to get back up.  Kamille tries to pick up the challenger and a jawbreaker by Allure stuns her and she then gets a boot to the midsection, followed by a splash to a spinning flatliner for a two count.  Allure attempts a suplex and Kamille gets her in a fireman’s carry to a Samoan drop, kips up, and rams her in the turnbuckles in the corner.  She tries to finish the Oklahoma Stampede but Allure slips out and nails with a backstabber for a close two count.  Kamille decapitates her with a boot and picks her up on her shoulder but Allure reverses with a flipping Ace Crusher.  She quickly goes and climbs the top turnbuckle for a stomp that misses, and Kamille delivers the spear for the one, two, and three.

Once again, Kamille proves why she will be the One-Time© champion of the NWA as the show goes to credits.

This was a strong showing by the wrestlers of Wildkat Sports Wrestling, and they do work well within the structure of NWA wrestling.  EC3 and Latimer added another chapter to their feud, and Mason/Cyon was also good in their matches.  Kamille is at the top of her game and will be for the foreseeable future.