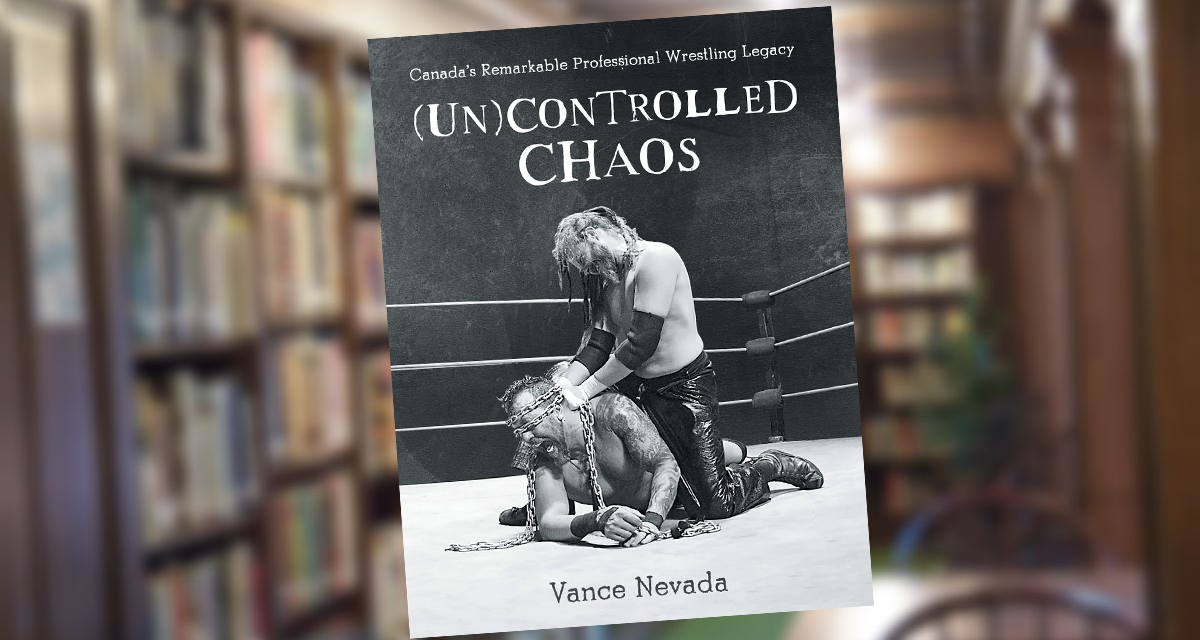 For many pro wrestling fans, if you ask them what they know about the Canadian pro wrestling scene, most will immediately recognize Stampede Wrestling and the infamous Hart family… but what about the rest of Canada?

Since 1994, author/wrestler/historian Vance Nevada (aka Mr. Beefy Goodness, but born Vern May) has been determined to answer this question by taking on the quest of compiling and writing the massive book, (Un)Controlled Chaos: Canada’s Remarkable Professional Wrestling Legacy. The book was released on August 19, 2022, through Friesen Press.

Now readers should be warned that this book is not a quick, weekend read. It’s more like a marathon binge session. But don’t let the plethora of pages (462) or the fact that it is technically a history book discourage you from picking up a copy for yourself. This book is indeed an essential Canadian pro wrestling resource, but the good news is that it is also fascinating to read. There’s plenty of juicy, informative and sometimes shocking trivia and tidbits for readers to gorge themselves on.

And Nevada knows his stuff having debuted as a wrestler at age 17 in 1993; he was handed the pencil to become a booker for the first time at the tender age of 19; was the recipient of the Cauliflower Alley Club’s (CAC) James C. Melby Historian Award in 2010; has been the editor of the CAC’s quarterly newsletter, The Ear, since 2020; and released Wrestling in the Canadian West in 2009.

(Un)Controlled Chaos begins with an introductory essay, “The Origins of Professional Wrestling in Canada,” by Dr. C. Nathan Hatton. Nevada then explores the pro wrestling territory years throughout the involved Canadian provinces from 1928-1989. We all know what happened next. Vince McMahon Jr. decimated the territories with the World Wrestling Federation, or WWF, now World Wrestling Entertainment or WWE.

Nevada explores the resulting emergence of the independent wrestling scene throughout Canada’s provinces. This section of the book was definitely the highlight for this reader. Being from Saskatchewan, I was flooded with nostalgia about the indy wrestling shows I attended there as I read the Saskatchewan chapter. It was such a joy to read about the now defunct High Impact Wrestling (HIW) which ran from 1998-2019 and the nods to the late John Cozman, better known as Principal Richard Pound, and of course my mentor and renowned pro wrestling photographer, Bob Leonard. (Psst, yes this is a tad shameless, but you can read more about Leonard from a previous story I did for Slam here.)

The Saskatchewan chapter also reminded me that when my husband and I were dating, we went to a HIW show when Cannonball Kelly debuted. Kelly, a rotund but passionate underdog, had all the fans under his spell quickly and cheering madly for him. Sure, some of these names may not have gone on to the bigger pro wrestling promotions like WWE or All Elite Wrestling (AEW), and their names may not resonate or mean much to some pro wrestling fans, but they meant something to me, the other attendees at these shows, and even my husband who still recognizes Kelly as his favorite indy wrestler all these years later.  These people made a contribution to pro wrestling and Nevada has recognized and preserved it with this book. And as a military wife who has lived in multiple Canadian provinces, I appreciated learning more about my country’s indy scene. I’ve had the opportunity to attend indy shows at our my family’s various military postings, but I was excited to discover that I still have plenty more to experience. 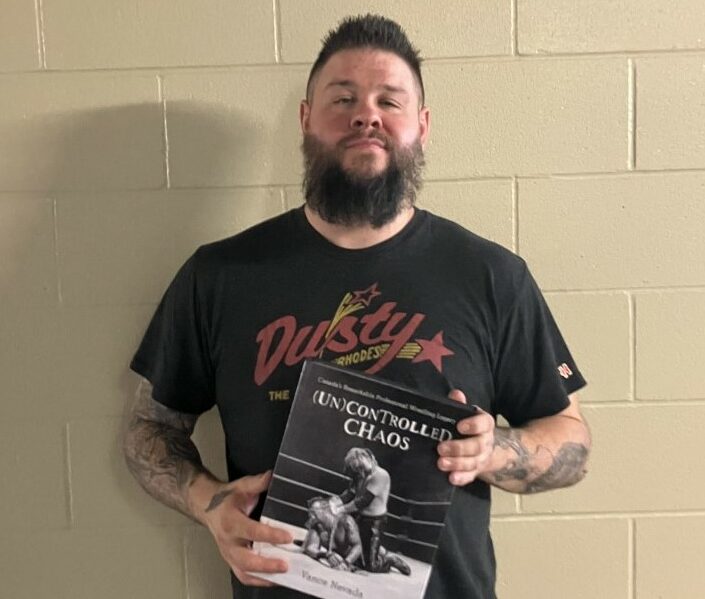 Kevin Owens poses with the book at Monday Night Raw in Edmonton on September 26, 2022.

The book then continues with a look at the WWE’s appearances and impact in Canada, a short blurb about the affect of COVID-19 on pro wrestling in Canada, and a section about how women wrestlers had to literally fight for the right to fight due to strict bans on women’s wrestling. Fun fact from the book: “On November 9, 1971, Montreal became the last major Canadian city to lift their sanctions (on women’s wrestling) allowing Vivian Vachon to wrestle Jean Antone.”

Nevada deserves to be commended for his passion and commitment to writing this book. It was obviously a laborious labor of love. Just thinking about the number of interviews he has obviously conducted and hours of research he’s put in is astounding and makes this reader dizzy. For the record book section alone, Nevada writes in the book, that it reflects on “more than 600 championships that have been recognized by more than 200 Canada-based wrestling organizations in the country’s professional history.” And naturally in most cases, “the official records were not kept by the promoters themselves and the records assembled here are cobbled together through the work of wrestling historians through event programs, newspaper ads, and clippings and from their own notes and remembrances.” Nevada really had to dig for this impressively assembled section and says he also relied on a “directory of more than 60,000 live wrestling events.”

Nevada gets bonus points for the number of and quality of photos throughout the book. And as this reader has a best friend who works within the photography world, I appreciate that the majority of the photos have photo credits in the captions. So important!

The book serves as an effective means for pro wrestling fans to see where current Canadian pro wrestlers like Kevin Owens and Sami Zayn first learned their craft. And you can even learn more about the contributions to Canadian wrestling from my fellow Slam contributors, that goes beyond their articles on this site, including Bob Kapur, Andrea Kellaway, Pat Laprade, Bertrand Hébert, and Sebastian Suave.

The only caveat I would have is that the book could have used some sharper editing. There are some repeating paragraphs, layout decisions, spelling, and grammar that needed more attention and fine tuning.

This is going to be a tad cheesy, but when I closed the book, I found I was filled with the immense pride of being a Canadian pro wrestling fan. Not many books leave you with your knowledge expanded and with deep feelings of patriotism, but this one sure did for me. I am anticipating Nevada’s future book releases, and am especially hoping he gives us readers his autobiography.

NOVEMBER 5  – Kirby Centre – Can Am Wrestling 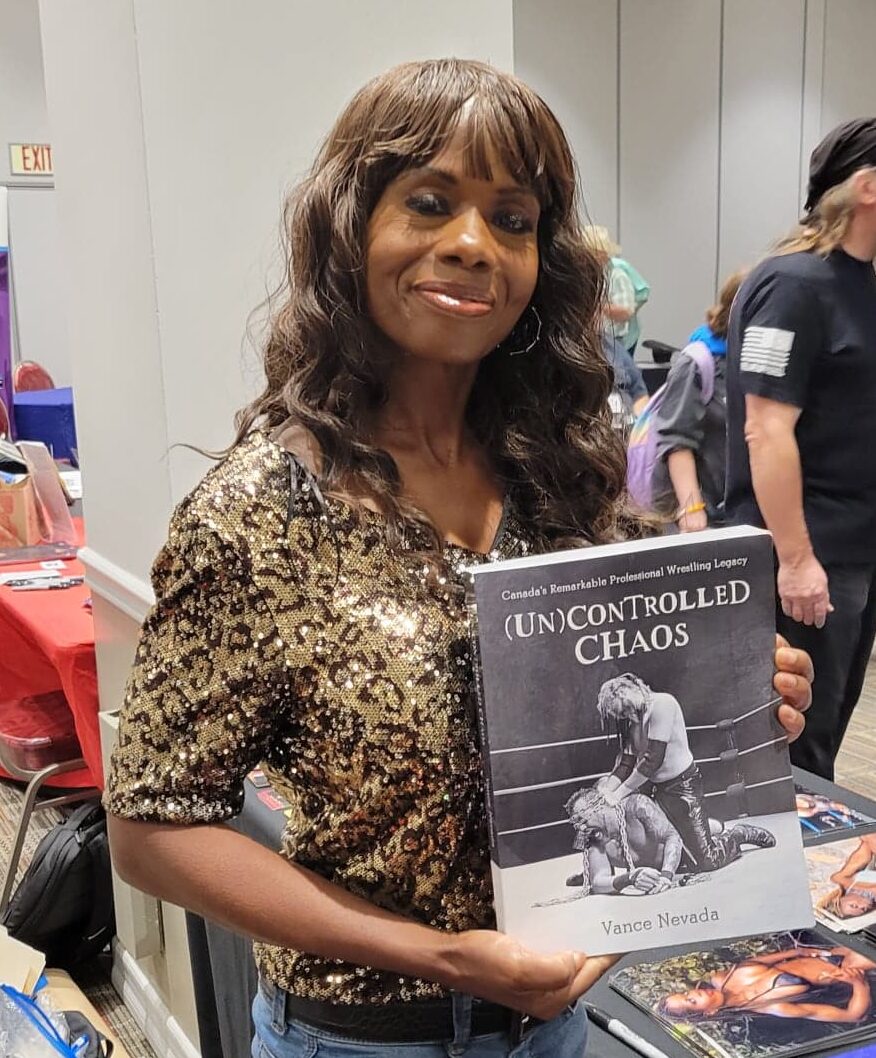