Jean Antone, the women’s wrestling star who died this morning at age 73, was never shy. At only 4-foot-11, she knew she had to battle to get noticed. “Being 4-foot-11 didn’t help me get too far, but I got up there and scrapped with the best of them,” she said in 2006. 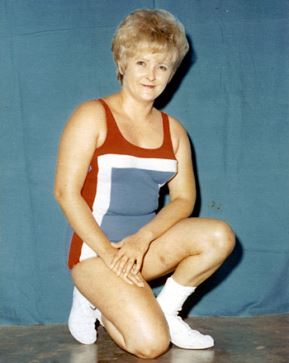 A magazine story on her, published during her career – which ran from 1961 to 1984 — described her. “Jean packs the power and drive of a six-footer in her furious attacks,” it reads. “Jean calls herself a ‘gidget,’ which she defines as ‘a person who is not small enough to be a midget and not quite tall enough to be normal-sized.’ But her fans fondly call her ‘Little Miss Dynamite.'”

The last few months have been rough for Antone, who suffered two aneurysms in March, and has been in and out of Baptist Health Systems in Carthage, Mississippi ever since. When she wasn’t hospitalized, her daughter, Patricia Morado, took care of her at home. Jean Antone died August 4, 2016, at 8:35 a.m., her daughter by her side.

“I got to hold my best friend, my strength, my arguing partner, my head strong Mother… but she loved me for me with all my flaws…. while she took her last breath peacefully,” wrote Morado on her Facebook page, a place to keep her mother’s many friends up to date about her health battles.

Battles were something Antone was used to.

She was born on July 17, 1943, and attended Glade High School in Laurel, MS. Antone began her wrestling training in Ella Waldek’s backyard in Florida, and was soon on the road, which had its pluses and minuses.

“When we first began, we didn’t have a whole lot of money, but we were quite the boozers — after the matches. We kept losing our boozing money because they’d fine us if we went in there boozing, so it didn’t take them long to crack us of that one,” Antone said. “It’s a lonely life, because everybody knows you and you know nobody.”

Based out of Kansas City, Missouri, for most of her career — “We were lucky there,” she said, referring to being outside the control of Fabulous Moolah (Lillian Ellison) and her team of touring women wrestlers – Antone knew that she had been fortunate as they got to go to “places people save a lifetime to go.” She was usually billed from New Orleans.

Then there was the “other woman” — Betty Nicoli, who Antone tangled with countless times in the ring.

Leo Burke worked in Kansas City (as Tommy Martin), and recalled their battles. “Betty Nicoli and Jean Antone, they were fixtures in Kansas City … They were almost part of the furniture. I got to knew them pretty well,” he said. “They had worked so many times together, they didn’t have to think or do anything. They just went in like rubberballs. They didn’t have to think and do their thing.”

The late Sonny Myers, a notorious curmudgeon, once praised Antone as a good worker. “She was up and at ’em and everything. She wasn’t a coward. She was a girl that really put out the works.”

Nicoli and Antone had a good relationship.

“One time, one of the wrestlers said, ‘If I didn’t know any better, I’d think ya’ll were married.’ We were in the ring together so much,” said Nicoli. “It just happened to work out that way because we worked, basically, out of the same office. Promoters in other areas would ask specifically for us. They just thought that the combination of mean and meaner — because that little girl is mean. She’d come at you with both fists a flying, and there’s just no getting away from her. You knew you had to kick the crap out of her to stop her.”

In separate interviews both Antone and Nicoli had this reporter pass on messages.

“If you ever talk to Jean Antone, tell her if I wasn’t so old and decrepit, I’d be kicking her ass still to this day. She’d love to hear that. She called me a dumb Dago in the ring,” quipped Nicoli.

Antone’s response about another beating from Nicoli, who was only 5-foot-1 herself? “Which replaced knee was she going to do it with?”

Both had stories about tours of Japan.

“We were in Japan, and because the American girls had to stick together against the Japanese, Jean Antone stepped off the curb — we were going to go eat — and a taxi cab ran over her foot. I laughed so hard I thought I was going to die. She didn’t think much of that,” recalled Nicoli, laughing at the memory.

Antone recalled a misstep by Nicoli. With Antone already in the tub, Nicoli came by. “‘Here comes Big Bird!’ she said, as her feet went out from under her. She hit that scalding hot water. I never laughed so hard in my life!” cackled Antone.

Perhaps there are no two women wrestlers who worked against each more than Antone and Nicoli.

“We were just thrown together all the time. It mindboggling — she knows my moves, I’ve got to come up with different moves. This girl is on a mission to get me,” said Nicoli. “It got difficult to wrestle her and win because she studied me. She knew my moves before I even knew them. It was always hard to come up with new things where it would take her off guard.”

Antone said it was deeper than that: “We could read each other’s minds. Back then, we had one! We don’t have one now!”

Another woman booked by Bob Geigel in Kansas City was the late Kay Noble.

“I think the hardest that I’ve ever been hit in my life is by Kay Noble,” said Antone. “I made the fatal mistake of moving to Arlington, Texas. I got mad at Bob and I left. I stayed about a year. Then Bob and I kissed and made up, and I went back to Kansas City. They booked me against Flamingo Legs and Buggy-whip Arms — that’s what I always called her. … She got me in that ring, she shoved me against the ropes first thing, and she came from the floor, and looked at me with that little shit-eating grin, ‘Welcome back.'”

Geigel, who died in 2014, once explained his philosophy on booking the women wrestlers. “We’d bring them in and keep them for maybe two weeks, and then bring in another one for the third week. Then we’d leave them out for six or eight weeks,” he said. “If you don’t use girls every day, every week, why they mean something when they get there. Same with midgets.”

One time, working in the Midwest for promoter Joe Dusek, Geigel was driving with Nicoli and Antone in the car. “We’re on our way back, and there was a storm and a tornado. We’re going down the road and a corn crib blew across the road, and over the hood of the car. Then the storm kind of picked the car up a little bit — I was only going 15, 20 miles an hour — and aimed the car toward the ditch, but it didn’t push it in the ditch. They were a little nervous,” recalled Geigel.

On November 6, 1961, Antone married Billy Joe McLain in the ring in Laurel, MS. According to historian Michael Norris, promoter Ray Andrews gave them $50 for a wedding gift.

After getting out of wrestling in 1984, Antone worked in a sewing factory for a decade, “before it closed and everything went to Mexico.” She later worked in a convenience store in Morton, MS.

The visitation will be at Ott & Lee Funeral Home in Morton, Mississippi, on Saturday, August 6th at 3:00 p.m and the service will follow at 4 p.m.