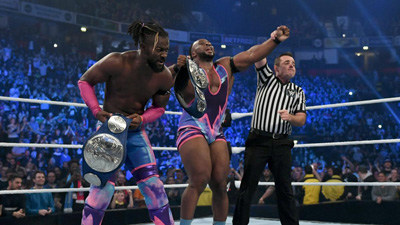 The George Tragos/Lou Thesz Professional Wrestling Hall of Fame weekend served as a homecoming of sorts for one-half of the longest reigning WWE tag team champions.

Big E, a former University of Iowa defensive lineman, participated in the weekend’s autograph signing and attended the induction banquet in Waterloo, Iowa, a week ago. 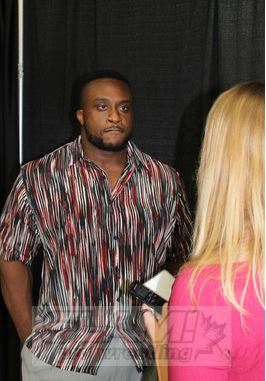 “It’s been really cool to be back and especially — I feel a bit out of place in that there’s so many legends who’ve done so much more than I have, and I’m here for some reason, so it’s very humbling,” the New Day member told SLAM! Wrestling prior to the banquet on July 23rd.

The former powerlifter said he feels like he “really became an adult” while in Iowa.

“Mike Doughty’s one of the organizers. Honestly, he’s the reason I got signed,” Big E said. “I would never even be here, so I feel like he changed my life. So anything I can do to help him at all or to give back even in the slightest is a cool thing.”

Doughty, development director for the hall of fame and museum, said he knew of Big E in the early 2000s, but it wasn’t until after a chance meeting with Jim Ross on a flight to Philadelphia that Doughty met the Hawkeye. Ross and Doughty struck up conversation in which Ross told Doughty what WWE looks for in talent. Fast forward to the NCAA tournament in St. Louis, at which Big E’s teammate Mike Humpal suggested Doughty meet Big E, given name Ettore Ewen.

After the three met, Doughty made the call to WWE, which ultimately led to Big E’s tryout.

“That was the end of my involvement … I helped crack the door open. Ettore blew through it,” Doughty said.

Humpal, a former workout partner of Ewen’s, said Big E — a nickname he had prior to WWE — was always a “big, muscle-bound dude” that people talked about. During the St. Louis trip, Humpal said, he mentioned the WWE opportunity to the future Intercontinental champion.

“I got the sense there was a fire inside of him yet that hadn’t really been sparked … He, without hesitation, jumped all over it,” Humpal said of the chance to step in the squared circle.

The Iowa alumnus’ football career didn’t go the way he hoped — Ewen suffered injuries during his first season on the gridiron that dashed any hopes of continuing in the sport — but he said being “a legitimate athlete” throughout his life is “in many ways a crucial part of what I do now for a living.”

“I think just having that athletic base and also being an amateur wrestler is big for me as far as learning discipline and sacrifice,” Big E said, “and powerlifting’s just another element, too.”

Such amateur backgrounds are a key factor to the awards and honors given by the Tragos/Thesz Hall of Fame, which is housed within the Dan Gable Museum. Bridging the gap between professional and amateur ranks is a concept Big E appreciates — specifically in relation to some of WWE’s current stars.

“It’s great because we have so many guys too who’ve used their amateur background to really take off and [who are] in their careers right now, guys like Jack Swagger, Dolph Ziggler, American Alpha [Jason Jordan and Chad Gable], both those guys are amateur wrestlers, and obviously Kurt Angle is one of the best to ever do it on either side,” Big E said. “So it’s very cool, and there are a lot of parallels between the two, so it’s great that we have a place that houses a hall of fame for both amateur and professionals.”

Big E’s hall of fame appearance occurred during what museum officials said is the largest crowd they have had for the annual festivities. In polling attendees, Doughty said, the “huge uptick” was because of Big E.

“When I travel across the country, I realize how big of a star Ettore is in the world of professional wrestling,” said Doughty, who has been trying to get Big E to visit the hall of fame for a few years so he “can see the hall of fame he’ll be going into some day.”

While Humpal has enjoyed watching Ewen grow as a performer on WWE television, Humpal said his former teammate is “still Big E to me” — a “super nice guy that has all the time in the world for you.”

“Now talking to him, seeing him in the news and on TV watching him perform, and it just puts a smile on your face seeing how successful he’s been,” Humpal said.

The way Big E has embraced his wrestling career, according to Doughty, “speaks volumes” for his character, discipline and work ethic.

“I just have seen him embrace the situation, embrace the opportunity and do everything within his power to maximize his success,” Doughty said.

The nearly 300-pound man always has wanted to be in a position where his career “didn’t feel like a job” and could be something that offers him a “comfortable living.” From his main roster debut as Ziggler’s stoic bodyguard to now dancing, gyrating and wearing a unicorn horn on his head with The New Day, he’s secured that lifestyle.

“I eventually found [that] I think I can one day be good at this, and I decided to give it a shot,” the former Intercontinental champion said. “I was 23. I kind of felt like I could take that gamble, and now I’m 30 and aging quickly, but I know it’s been a fun ride.” 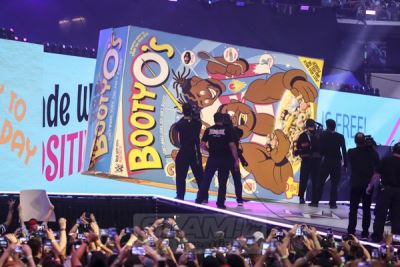 The giant box of Booty O’s at WrestleMania. Photo by Ricky Havlik, RickyHavlik.com

One of the more recent highlights not only for Big E, but The New Day trio as a whole, is the announcement of Booty-O’s cereal as a tangible product, which was made at Wizard World Comic Con in San Diego, Calif.

Big E said they knew about the product about two months prior to the announcement, but its significance cannot be understated.

“The fact that we haven’t had a food product in WWE for years, [it] is pretty cool that we’re the ones to bring it back, so it’s exciting,” Big E said. “So hopefully it does well. We’re always kind of — at least me — I’m always just anxious to make sure things do well, so hopefully that takes off.”

In the roughly two years since New Day’s inception, the trio of Big E, Kofi Kingston and Xaxier Woods have gone from a not-necessarily-well-received pairing to outgoing personalities that made this year’s WrestleMania entrance from a larger-than-life-size box of Booty-O’s. The group’s chemistry, according to Big E, “feels very organic.”

“I think people can perceive when things are forced, and I always felt like event when things weren’t really going our way at first, I felt like people would eventually pick up on our chemistry, and it’s a very real thing,” he said. 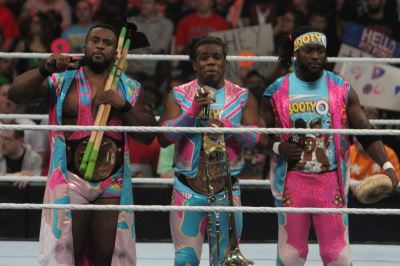 The New Day — Big E, Xavier Woods and Kofi Kingston — at Extreme Rules in Newark, NJ, in May. Photo by George Tahinos

As proof, Big E said Kingston, Woods and he travelled together from the summer prior to their TV debut.

“We had months and months of working the live events together, traveling together and we were already friends beforehand, but really working on this idea — and all the hours and weeks and months spent pitching stuff, writing stuff, shooting stuff on our own — we spent a lot of time trying to get this off the ground, so that really forged our bond,” he said.

But the biggest selling point, according to Big E, is that the trio is authentic.

“We’re essentially ourselves. We’re all kind of goofy, quirky,” Big E said. “A lot of people at first wanted us to be the Nation of Domination, but not that we’re not tough, but we’re nerds. And we’re weird.”

And people also want to have fun, he said.

“I think that there are a lot of serious characters in wrestling, which I think’s always great,” Big E said. “For the longest [time], I wanted to be a serious character, but I think offering people an alternative is always a good thing. So as long as that’s something that people are into, having fun and wrestling, then we’re trying to provide that alternative.”

And in their role as the alternative, Big E said contributing to WWE’s tag team division has “been very important to us.”

“But eventually you always have to evolve and grow, and I think it’s very possible for us to pursue singles titles as a unit,” Big E said. “I don’t think we need to break up or do anything like that. We’ll see.”

While Big E acknowledged that need for change, he said it’s hard for him to look too far ahead.

“Six months ago, we didn’t know there was going to be a brand extension and things like that. They kind of alter the way you have to pursue your craft,” concluded Big E, a member of the Monday Night Raw brand. “So we’ll see. I pursue very long and healthy, robust time as The New Day.”