Wrestling in the Canadian West a rich and fascinating book

With Wrestling in the Canadian West, author and wrestler Vance Nevada takes the reader on a fact-filled journey, through the many years of professional wrestling that’s origins go back to 1911 in Western Canada.

Wrestling enthusiasts will appreciate the top-notch research, exacting attention to detail, along with many photos of wrestlers that have competed in the region, as well as the wrestling posters from past promotions that are displayed throughout the book. 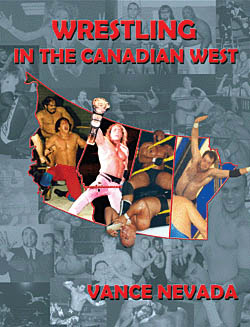 This work is an encyclopedia of wrestling activities that have occurred in Western Canada. There has been over 18,000 live events in the region since 1911; Nevada is trying to shine a light on much that has been overlooked.

Wrestlers that have appeared in this part of the country often undergo very difficult travel experiences to and from wrestling dates. The distances between towns can be considerable. Travel in the west during the winter has proven to be very intimidating; the wrestlers who compete in this part of the country on a consistent basis are labelled by their peers as the toughest.

A wrestler and historian, Vance Nevada (born Vern May) was born in Souris, Manitoba, a farming community of 2,500. He is a ring veteran, having competed in over 1,200 matches, during his 16 years as a standout grappler on the mats. Nevada will receive the James C. Melby Award for his work with the history of wrestling at this April’s Cauliflower Alley Club reunion in Las Vegas.

As a youngster, Nevada developed a great interest in professional wrestling, and he bought every magazine he could find. He watched every televised match available to him. Thus began an obsession to find out as much as he possibly could, by way of constantly digging through as much research on the history of wrestling in Canada’s West that he was able to find.

He has used his wrestling bookings to take advantage of opportunities to visit libraries and archives in order to cull information for a recorded history of the sport. He has been credited in numerous books, websites, and projects, including the Canadian Championship Wrestling Newsletter (1993-1997) and also has been heavily involved as a teacher and mentor for developing talent in the wrestling industry. He has helped to mold the careers of more than 40 aspiring superstars.This book is a chronicle of the hours, days, and years that he spent flushing out wrestling history and events, from every area of the four provinces that comprise Western Canada: British Columbia, Alberta, Saskatchewan, and Manitoba.

The book contains a number of different topics, set up for easy reading:

-A day in Canadian wrestling history has 80 separate references, such as September 5, 1935 – Vancouver, BC: Utah’s Brother Jonathan (Johnathan Heaton) makes his first appearance in the region, defeating Pat O’Shocker in his debut. Heaton’s son, best known as Don Leo Jonathan, would later become one of the biggest stars to ever appear in Western Canada.

-Nevada has garnered wrestling records that reach back many years. For the historians, there are 106 wrestling promotion profiles that are listed from 1930 to 2008. Each promotion’s history is chronicled as to who appeared and when, as well as titles won and lost, and the number of wrestlers that appeared for the duration of each listed promotion.

-Considerable political wrangling was played out behind the scenes by various athletic commissions. This becomes obvious to the reader as revelations are made in regards to which promotion will receive the go ahead to run cards in certain locations and on which day of the week.

-The most notable promotion was Stampede Wrestling, which Stu Hart ran out of Calgary, Alberta from 1948-1989. “Stampede Wrestling eventually far outdid all the other wrestling clubs in Western Canada, that appeared before, and after its departure. It topped all the other Canadian circuits, as it drew more attention, and world wide recognition,” writes Nevada. “Stu would bring top stars to the foothills of the Rocky Mountains. World champions from other wrestling promotions, NWA, WWF, AWA, would appear on Stampede cards, on a regular basis.”

-Nevada enjoys sharing stories wherever possible, and uses his own interviews and archival stories. On one occasion, former world boxing champion Rocky Marciano was brought into Stampede. “I tried to use an idea with him one time,” related Stu Hart in an interview with Saturday Night Magazine, “after he stopped boxing, I brought him here to make an appearance at the Stampede Parade, our float was set up so that Waldo von Erich would take a shot at Marciano, I didn’t tell Marciano what I had in mind, so as to get the best effect. So Von Erich pulls Marciano’s hat down over his head, Rocky shows no emotion, ‘just make a fist do something,’ I tell Marciano. We could have sold out the Corral the next week, the place would burn up. But Marciano would have none of it. He thought all this wrestling stuff was comedy — that is until a wrestler — I don’t wanna say who — snatched him in a dressing room in Chicago one time.”

-The mighty midgets are not overlooked in the compilation of wrestling history in Canada’s West. The first documented midget wrestling match in the West featured Sky Low Low against Pee Wee James at the Winnipeg Civic Auditorium on October 13, 1950. Midget wrestlers such as Lord Littlebrook, Tom Thumb, Little Beaver, Fuzzy Cupid, Darling Dagmar, Pee Lopez, Little Brutus and Sonny Boy Cassidy have all appeared; in fact 98 midget wrestlers have shown their wares in Western Canada.

-Nevada also researched the women’s wrestling appearances in the Western Provinces while on his fact-finding mission to assemble the book. The lady wrestlers competed in Western Canada in the period from 1933-2008 include major names such as June Byers, Penny Banner, Fabulous Moolah, Joyce Grable, and Velvet McIntyre. The top 100 all-time women wrestlers that appeared are listed, along with their win-loss records.

-Another topic covers “Stories from the boys,” with 24 entries in the book. The following story was related by Mike Edwards, who was involved in the wrestling business for 27 years. As a referee, he spent the first seven years of his career exclusively for Al Tomko’s All Star Wrestling Promotions, and his account follows: “We were on the road one time and pulled into Quesnal for breakfast. Todd Tomko (a.k.a. Rick Davis) and I both ordered full meals — bacon and eggs, Al was with us and he orders only a bowl of water. Todd and I were quite puzzled about this, but then Al says, ‘I’m gonna show you guys how to save money on the road.’ When his water arrived, Al proceeded to pour a good amount of ketchup in the bowl. ‘Walla, ketchup soup.’ He follows that up by pulling three hard boiled eggs out of his coat pocket, and cracks them open at the table. Tomko beamed with pride, as he declared, ‘Boys, that’s how you save money.’ Todd was so embarrassed that he didn’t talk to his dad the rest of the day.”

-There are many details of records that the reader will find very informative. One is the “Top Drawing Wrestling Events In Western Canada” section. An example would be July 1962 – Vancouver, BC – Promoters: Cliff Parker and Rod Fenton, attendance 14,000+ main event Buddy Rogers retained NWA Title, defeating Gene Kiniski

-There are statistics for active professional wrestlers in the book as well, including the height, weight, hometown, birth date and debut of a total of 212 wrestlers that are active in Western Canada.

Nevada’s work cannot be understated. He has mined the rich history of wrestling in Western Canada through time and effort to provide a fascinating book.

Much has been revealed about professional wrestling on the pages of this book, the reader will find it difficult to put it down. As the quote has so often been used, it’s a must read for wrestling historians and fans alike.