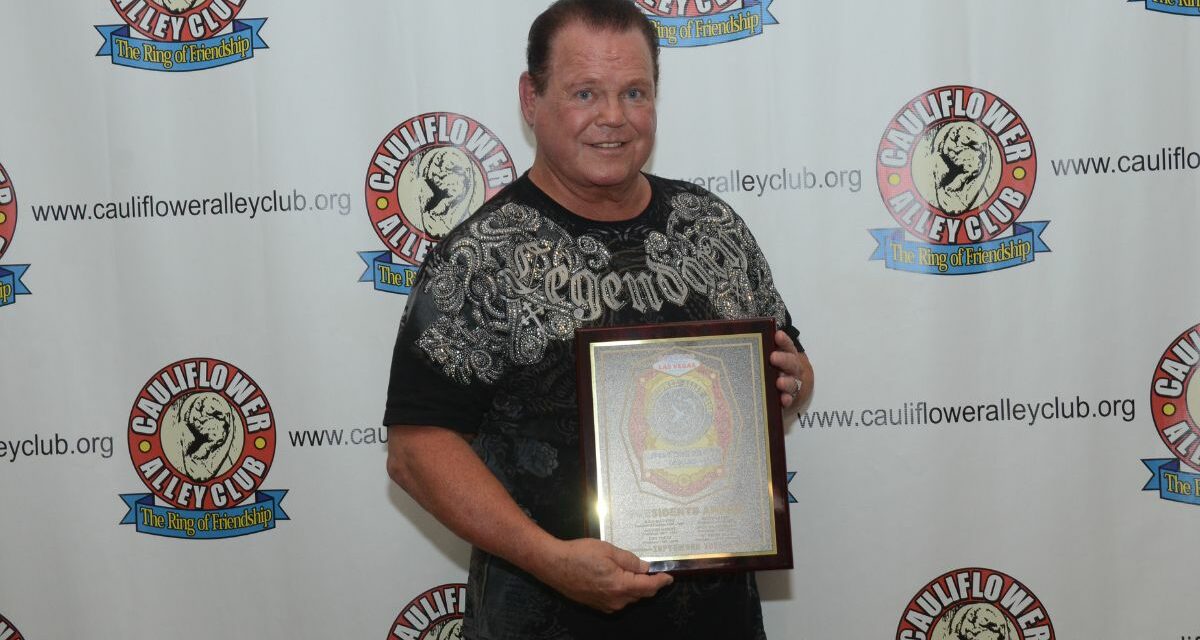 It was the 56th anniversary for the CAC reunions, and it was a return to the Plaza Hotel & Casino at the end of Freemont Street in Las Vegas.

To say it was hard to keep up with Hart’s one-liners would be an understatement, as he interacted with the co-emcees John Arezzi and “Madusa/Alundra Blayze” Debrah Miceli. 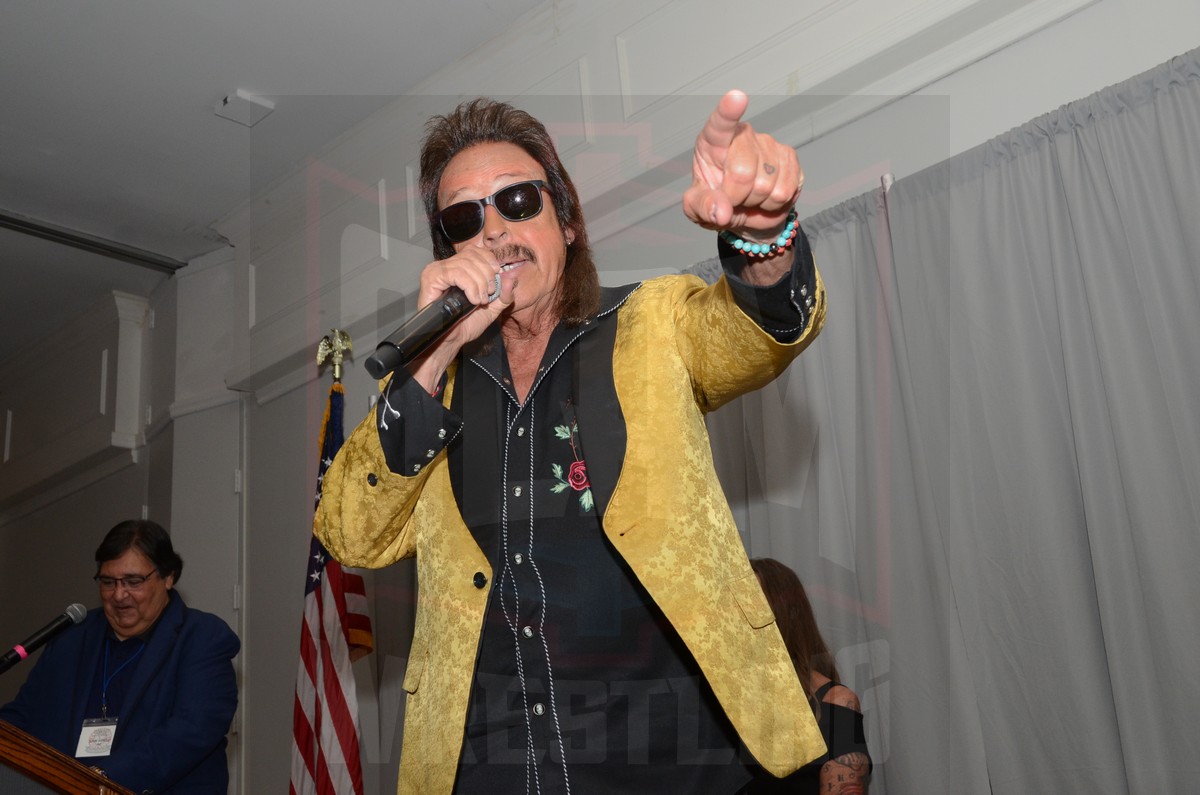 The main event was, as Arezzi quipped, was “fit for a king.” The President’s Award went to Lawler, who truly tied the whole night together, having stories on everyone, or everyone referencing him and his influence. CAC President Brian Blair talked about previous presidents from the organizations prior to bringing up Lawler. Just before ceding the mic, Blair shared a personal story of how he and Lawler shared a bond over losing adult sons at a young age.

Knowing he was on last, Lawler encouraged the crowd of about 400 to settle in as he was going long. Lawler noted how Memphis has had such an effect on pro wrestling and had all the wrestlers and referees in the room who had wrestled in the city stand up, to much applause. “I lived in a lucky time there,” said Lawler. “I can’t believe that Jerry Jarrett slept through this night.”

But in the end, Lawler is about telling stories, and the King was royally entertaining (with a side shot that he never thought about having five-star matches). There were tales on Sugarbear Harris who became Kamala, on Christine Jarrett’s motherly – in both the good and bad senses – style on his career, about the Fabulous Ones (Steve Keirn and Stan Lane) and their successes at the merchandise table.

“It was all about working every day,” said Lawler, where all the towns in the territory were within a 200-mile radius. He compared it to a “normal” day, just working nights, and always being home. “I never thought of myself as a big deal.”

“Should I tell this Jeff, or maybe not?” Lawler asked at one point, asking Jeff Jarrett about a story. Naturally, the CAC being a different audience that WWE and its Hall of Fame, he started into a colorful story about a magic marker and a white door in a girls high school, that included his wonderful art and a penis on a naked woman. “Apparently, the next day at the wrestling office, Christine gets a call. It’s the head priest from the entire Catholic girls school,” recalled Lawler. The priest asked about wrestlers with artist ability and she named Lawler. The following Thursday night, she got to see Lawler’s art in person. “The was like the most embarrassed I have ever been,” he admitted. To end the story, he and Sam Bass had to pay to have the door re-painted.

The Tag Team Award went to Ricky Morton and Robert Gibson, known as the Rock ‘n’ Roll Express. Their friend Chad Adams did the honors. “How do you introduce guys that have been wrestling for 40 years – and still wrestling?” said Adams, who said they were “almost like a second family” and “adopted grandparents.” Adams was a fan himself — “I was cheering like a teenybopper myself” — and encouraged fans to “buy them a couple of margaritas” and then the stories start rolling.

For those who watched the R&R Express over the years, it was a special moment with Ricky stepped aside: “For the first time, I’m going to let Robert start the talking,” said the always on Morton.

Gibson, who followed his brother, Ricky Gibson, into the wrestling business, and trained since the age 10; “on the way home I was crying” he recalled of the first time he was in the ring. Initially, Gibson was known as Ruben Goldstein in St. Louis, and in Memphis Lawler renamed him Robert. Not long after, Jerry Jarrett paired him with Morton, who he had first met when they were 14 or 15. “They started the Rock’n’Rolls and the rest is history,” said Gibson, who is known as “Hoot” by colleagues.

Morton noted that Lawler, sitting at the table in front of them, once said Rock’n’Roll Express was the “worst name I’ve heard.” When Lawler took the stage at the end of the night, he told his side of it, that Ricky and Robert thought the bandanas and torn T-shirts that Lawler had seen on MTV were a crazy idea.

A second generation wrestler, Morton talked a lot about getting better at pro wrestling, noting that great wrestlers make others “learn and understand.”

“What an education to start wrestling in Memphis, Tennessee,” said Morton. He (teeny)bopped through many names who influenced him, from Ken Lucas, who he said was the greatest babyface he ever saw, to Ric Flair, who was the best world champion, to Tommy Rich who “was the inspiration for every young guy in the business” and Jerry Lawler who was “the greatest worker in the history of our business.” 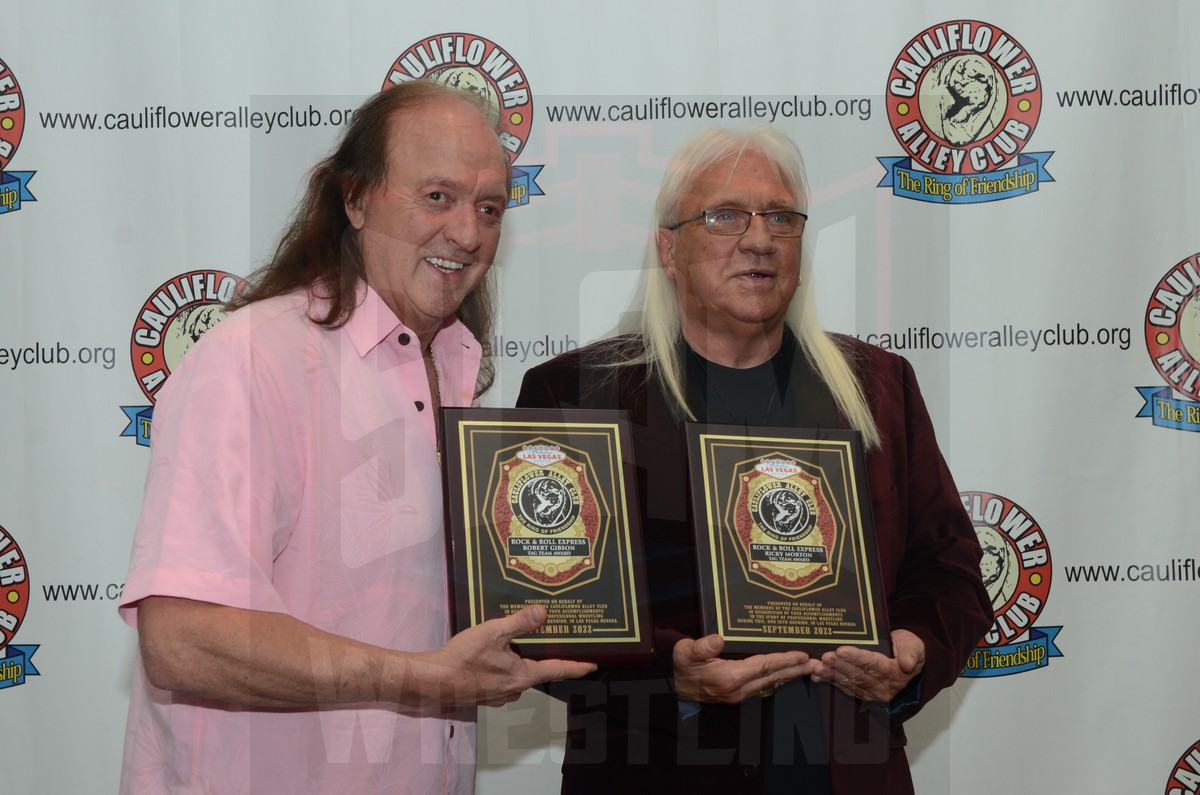 The Rock’n’Roll Express Robert Gibson and Ricky Morton at the 2022 Cauliflower Alley Club Baloney Blowout on Tuesday, September 27, 2022, at the Plaza Hotel & Casino in Las Vegas. Photo by Brad McFarlin

Madusa was called upon to introduce Women’s Award winner Jacqueline Moore, who oddly, she never faced in the ring during their long careers. “She’s an incredible role model … for all women in the industry,” said Miceli, with a warning: “She is sweet and quiet but don’t let that fool you.”

Moore thanked the fans –“You are why we are here today” — and shared some of her story, from being a competitive, sports-minded fan in Dallas who always loved pro wrestling, especially the Von Erichs on World Class TV. She saw an ad in the back of a TV Guide and trained with Skandor Akbar. Moore thought she “had arrived” after her first match.

“I really learned my craft in Memphis in the ’90s as Miss Texas,” said Moore, keeping with the theme of the night.

“I enjoyed the competitive feel of the sport, it’s sports entertainment at its greatest,” said Moore, who was inducted into the WWE Hall of Fame in 2016, and was in pro wrestling for 30 years, never having a serious injury. “People used to laugh and make fun of me because of my size” but she proved “good things come in small packages” 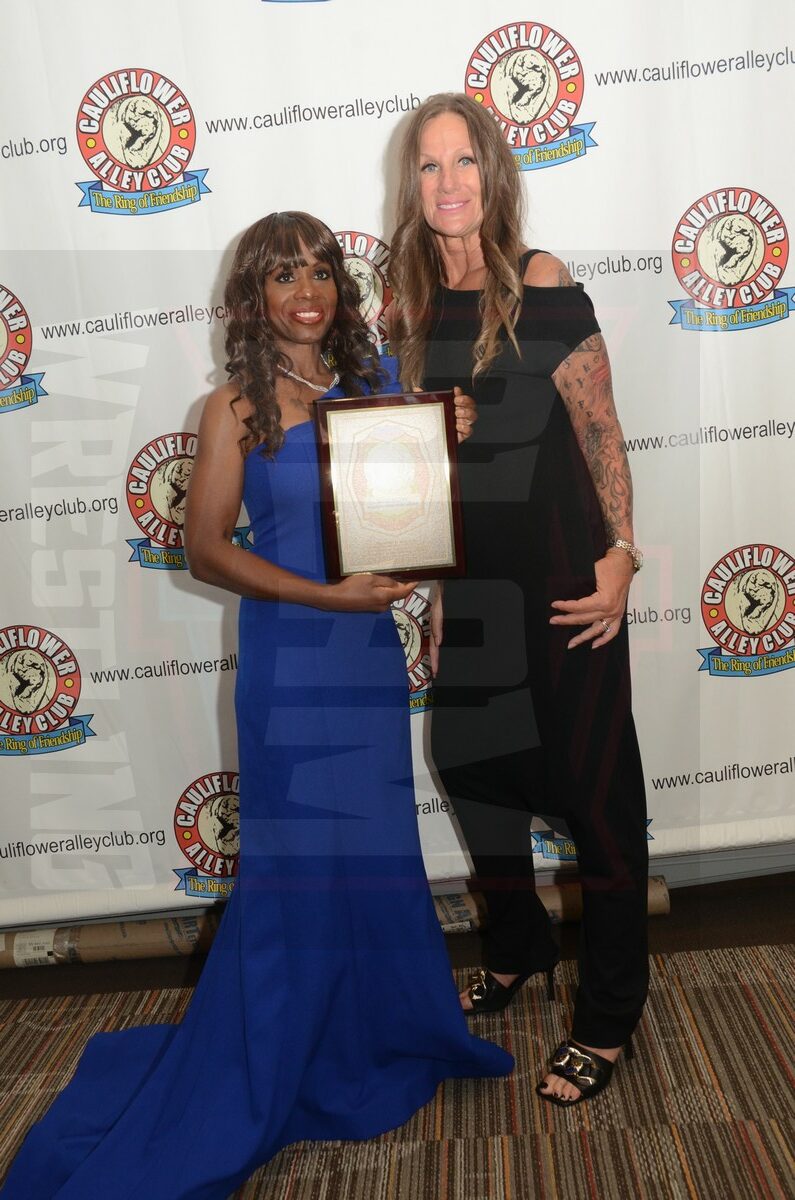 Jacqueline Moore and Madusa at the 2022 Cauliflower Alley Club Baloney Blowout on Tuesday, September 27, 2022, at the Plaza Hotel & Casino in Las Vegas. Photo by Brad McFarlin

Second-generation wrestler Doug Gilbert brought up former NWA World champion Tommy Rich.
“I’m not going to be up here all night talking,” said Rich. He detailed starting out with Nick Gulas, and thanked all the Memphis people in the room. “It’s been great and I’ve met some great folks … I’m sure there were some that didn’t like me,” said Rich.

He couldn’t leave without mentioning Atlanta, where he became a superstar on Superstation WTBS. “I was on cable before it wasn’t cool,” said Rich, thanking the fans as he ended: “If it wasn’t for ya’ll, I wouldn’t be here.” 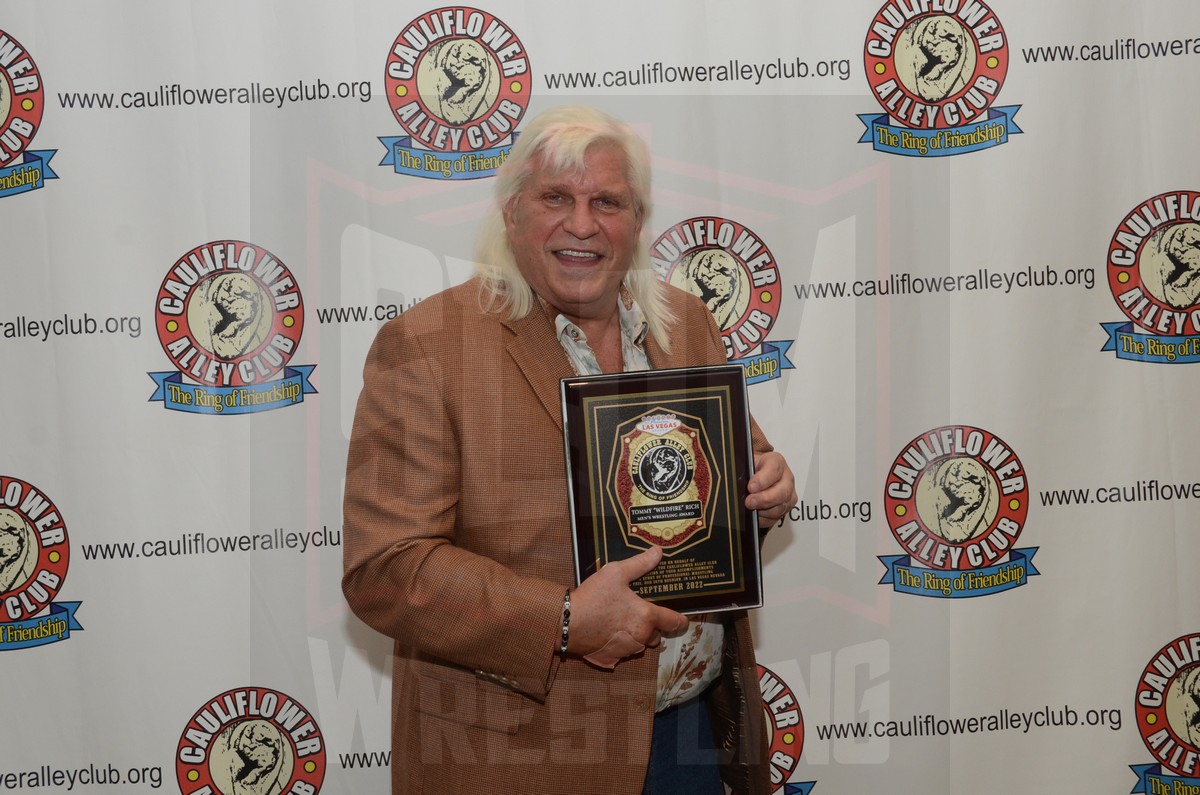 A posthumous award was given to Christine “Teeny” Jarrett, the mother of long-time promoter Jerry Jarrett and grandmother to “Double J” Jeff Jarrett, who was a promoter for towns associated with Nick Gulas and then later, Jerry Jarrett and Jerry Lawler. However, her family was larger than just those two, and introducing her was another grandson, Brennon Martin, who has written a book about her, titled Teeny. Martin briefly talked about his grandmother, but also talked about how he knew “Jeffrey” as his cousin, who later got to WWE and was “beat up by a girl” when Chyna won the Intercontinental title from him. 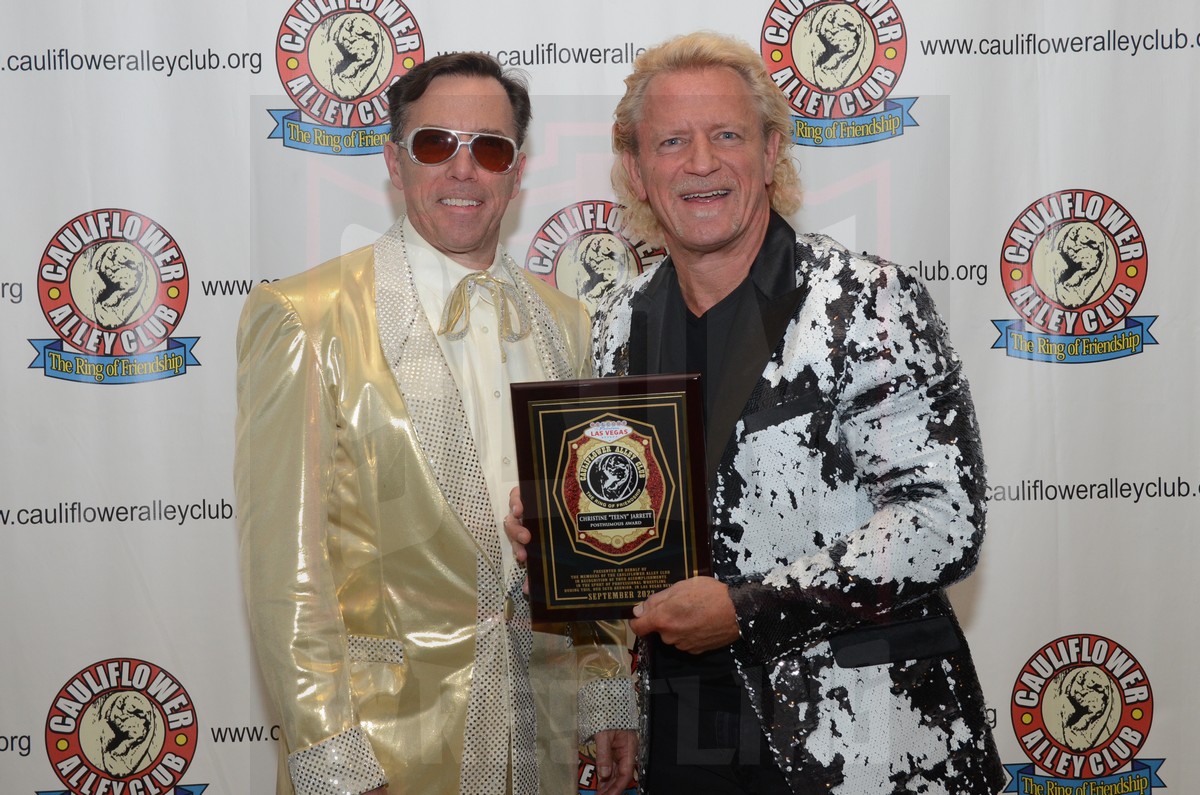 Jarrett was brought on stage, and immediately got emotional thinking about his grandmother who “really made me who I am today.” He shared some of the lessons he learned, going full circle from her using a legal-sized paper to keep track of a car repayment she made her grandson do, to Jeff writing out his notes for his speech on the same sized paper.

A single mother of two, Teeny “was the breadwinner of the family at a very young age,” said Jarrett. “Teeny made it in a man’s world when it just didn’t happen.”

Double J sold concessions for Teeny, and from there learned about inventory, money management, and made $116 his first night. “I said, ‘Sign me up!’” cracked Jarrett.

Opening up the night was the James C. Melby Award winner for contributions to keeping professional wrestling history alive. Steve Johnson, a frequent contributor to the SlamWrestling.net website and author of five books on pro wrestling, co-authored with this writer – who also had the honor of introducing Johnson.

After thanking his family, who were in attendance, Johnson noted how the historian’s job was to “construct, deconstruct and then reconstruct wrestling history.” Growing up in upstate New York, Johnson got to see a plethora of wrestling, including the NWF, Toronto, Pittsburgh, WWWF and All-Star Wrestling territories. Leaving for the University of Mississippi, he thought it was “time to be a grown up”; instead, he found fellow wrestling fans and his wrestling obsession never did leave. 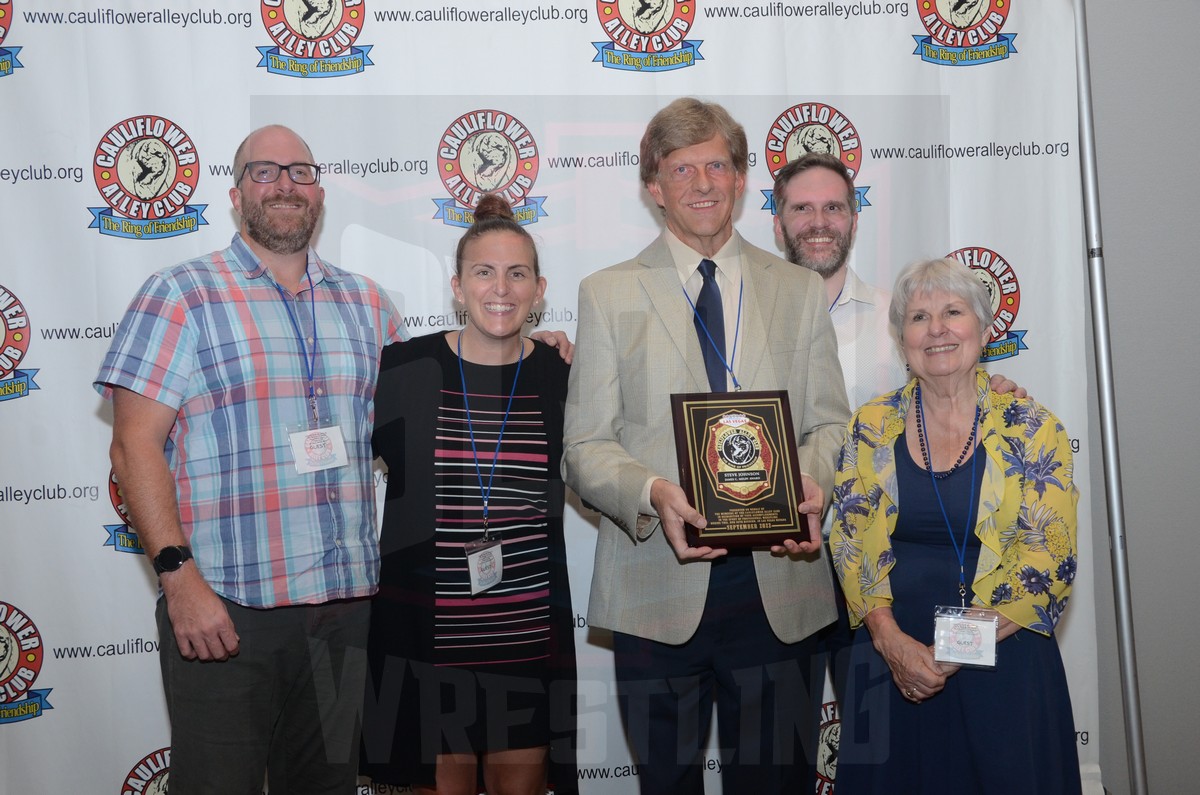 Steve Johnson with his three children, and wife Cynthia, at the 2022 Cauliflower Alley Club Baloney Blowout on Tuesday, September 27, 2022, at the Plaza Hotel & Casino in Las Vegas. Photo by Brad McFarlin

There was also a financial update on the CAC, by Executive Vice President and treasurer Rich Ingling, who noted that the club provided exactly $187,290.72 of financial aid to those in the wrestling community over the past 18 months, for everything from medical expenses to housing issues to tax complications. Ingling also noted that Dory Jr. and Marti Funk had just sent in a check for $1,000. A tribute to former CAC EVP, Karl Lauer, who died since the last reunion also ran on the video screen.

The Bockwinkel Baloney Blowout is a long-running tradition at the CAC reunions, a meal indeed of cold meat and bread, which is a tribute to the many late nights where the wrestlers would grab a loaf of bread and a pack of baloney to have something to eat as they drove down the road.