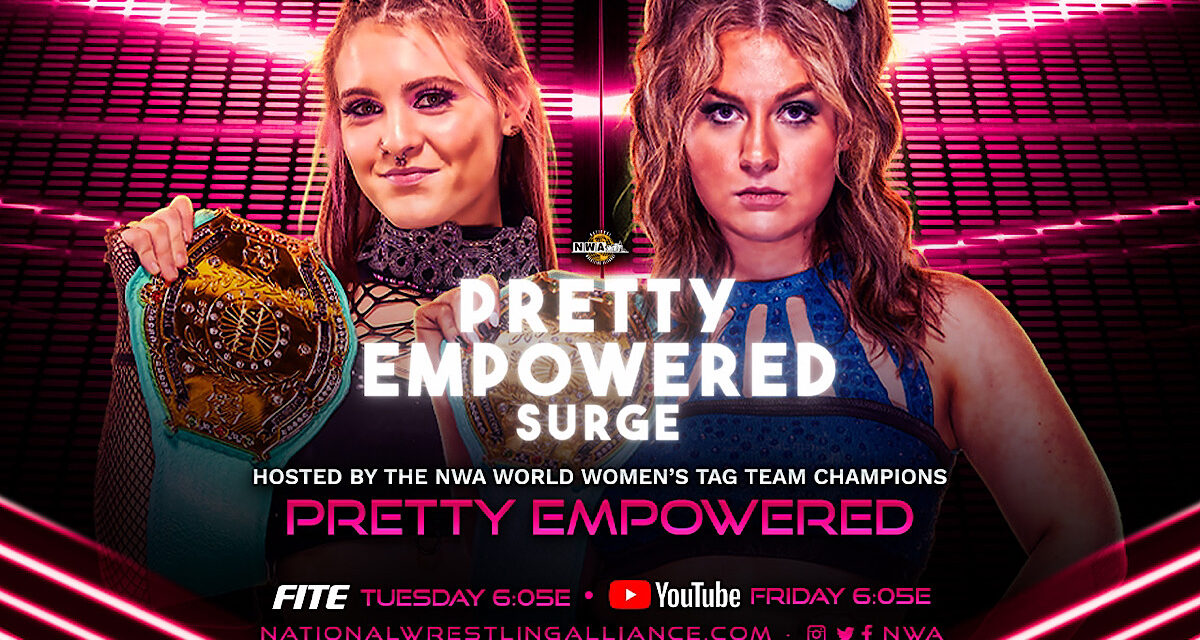 The National Wrestling Alliance offers the chance for the NWA Women’s Tag Team Champions of Ella Envy and Kenzie Paige of Pretty Empowered to host an all-new PowerrrSurge.  In fact, this is billed as a Pretty Empowered Surge, and these Surges can run the gamut from “funny” like when The Fixers hosted to “sultry” when Velvet Sky made in an “After Dark Special.”  I am curious about what Paige and Envy bring to this show, so let’s get into the fun.

Envy and Paige greet us to the show, and we have the “privilege” to see their Pretty Empowered Show, and let’s get to the matches.

Well, they get to the point, I’ll give them that.  So let’s head to the Skyways Studios in Nashville, TN.  Joe Galli, Tim Storm, and Velvet Sky Have the call for the First Match of the night… 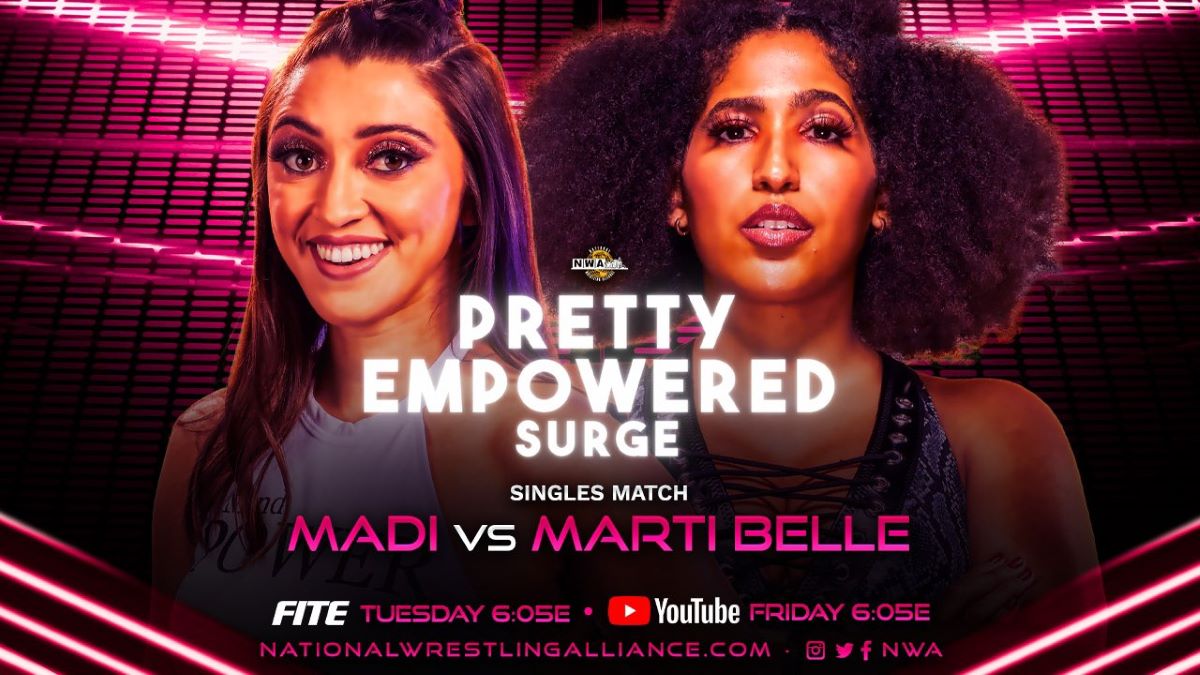 Belle throws the ring jacket at Madi who kicks it away, and she ain’t happy with that.  The Hex member just goes to a straight beat down on Madi and covers for a quick two count. Another punt kick by Belle gets another two count.  She sends her to the ropes, but Madi ducks between them, and Belle stuns herself.  Now Madi gets on offense and rams her head on the top turnbuckle.  Madi rushes in the corner but Belle counters with a rollup to get a two count.  Madi really adds more pain by getting Belle in a camel clutch while pulling her hair and then lands her elbows on the side of her head.  Madi tries to pin her at every attempt, but Belle keeps scrapping away.  Madi slams Belle’s head to the mat, and Madi rubs it in her face literally.  Before she could get in any more offense, Belle returns fire with a clothesline and a forearm shiver followed by a corner splash and then a hip attack (or as Sky called it on Commentary, “Booty!”  That was awesome), and she covers for just a two count.  Now Belle attempts the Protect Ya Neck finisher but Madi has it scouted, and then tries her Reality Check finisher, but that gets blocked as well. A jackknife cover by Madi is good for another two count and she gets Belle on her shoulders but she wriggles out and delivers Protect Ya Neck for the decisive three count.

We go back to Envy and Paige as they “talk” to Kerry Morton. I use the word “talk” loosely because they just fawn over Morton and he looks confused by what these Mean Girl rejects are doing.  If anything, it should make everyone appreciate the backstage skills of May Valentine and Kyle Davis.

Speaking of strange things, let’s go to your next match of the night, and it truly is a… 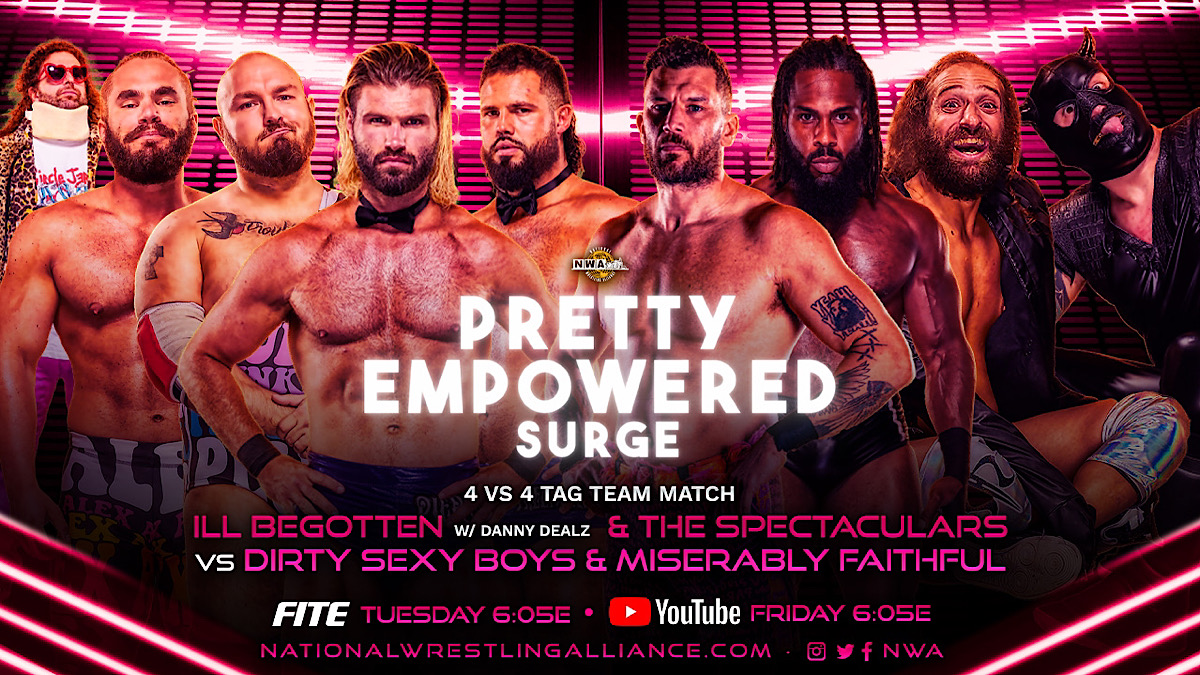 A couple of takeaways to start:  There is still bad blood between Freeman and The Ill-Begotten, and Sky is happy her Dirty Sexy Boys are back in action.  Storm is a little uncomfortable hearing this, and I understand where he’s coming from, but everyone has their own kink, so let her get as Dirty as she wants.

(Author’s Note:  This is a public service announcement from The Lucid Luchador to never kink shame.  You’re better than that.  Now, back to the match.)

Freeman starts strong against Dango, but he manages to nail a back elbow to Freeman.  He tags in JTG and they double team for a “cigarette drop” and a double stomp to Freeman.  Freeman sends JTG to the ropes and a blind tag by Sal gets him in, and now they’re playing mind games with The Spectacular member as they both sit down with the same look of insanity.  Freeman tries a boot, but Sal blocks it and sends it to JTG, who returns the boot back to Sal, and he goes for a rollup to pin for a two count.  The unorthodox offense of Sal makes it hard for Freeman to counter, but Sal finds himself in the corner of the Ill-Begotten and The Spectaculars. A tag by Taylor and he goes after Sal and sends him to Plunkett to hold him down.  Taylor goes for a forearm, but Sal moves, and Plunkett gets knocked off the apron.  Taylor tries to get in control with a headlock, but Sal hits him in the mouth.  He goes up the top turnbuckle, but Plunkett trips him up and Taylor capitalizes with a backstabber to cover for a two count.  Taylor tags in Plunkett and they hit a double team to Sal with a punch to the gut and then land a dropkick/legsweep combo to cover for another two count.  Plunkett stays on offense and then hard tags in Pierce, and he slams Sal onto the mat.  Sal is Miserably in Peril, as The Spectaculars keep him isolated.  They use a double team where Freeman high press to Pierce finishing by slamming his body hard and fast to the mat for another two count.  Pierce stays on Sal, but he bites his hand to get out of the hold and gets a springboard stunner to create space.  He crawls to the corner to get the hot tag and Gymp-A-Mania™ runs wild.  Gymp unzips to get the tongue wagging.  Tag to Dango and he uses the Gymp as a battering ram for all four men.  He then nails a sit-out falcon arrow to Pierce for the three count.

Your Winners:  The Miserably Faithful and The Dirty Sexy Boys

Never has there been a better picture of victory than this: 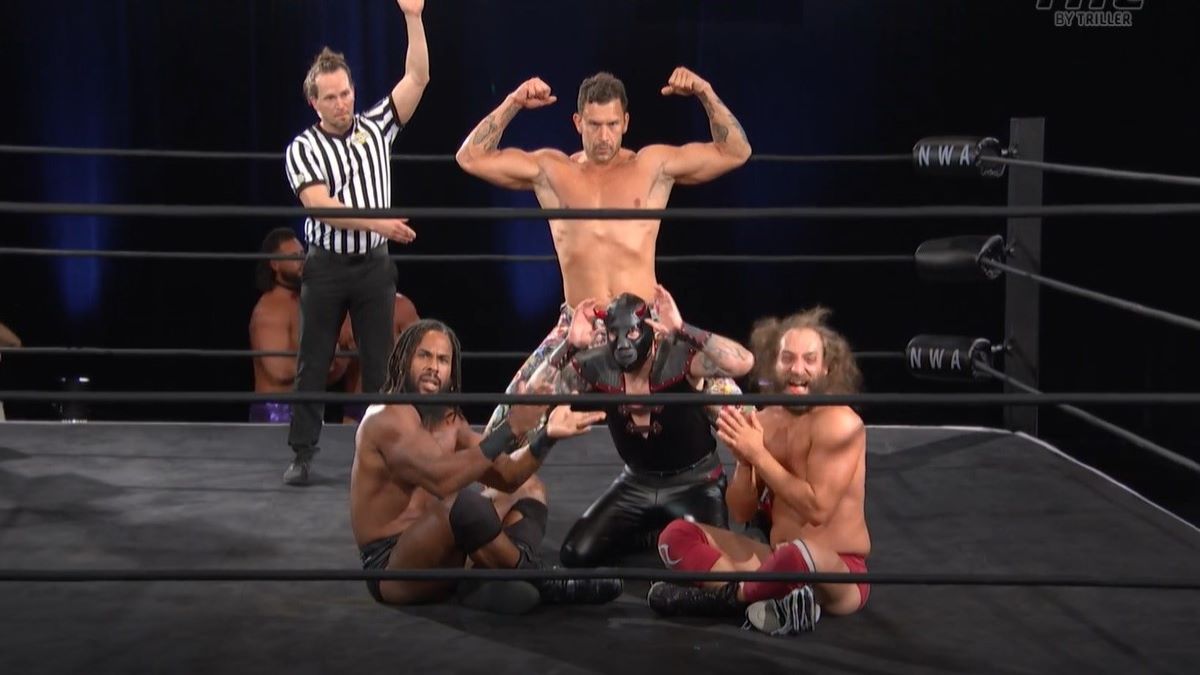 Now we go back to Pretty Empowered with their newest recruit, Roxy.  Envy and Paige really like her look so she can hang with the tag champs. Roxy is honored to be part of the group, and Envy says she is “Pretty Empowered Plus”, but she’s still, like, cute.

So far, the vapid talk is actually making me long for an actual interview, but let’s go to the next match of the night… 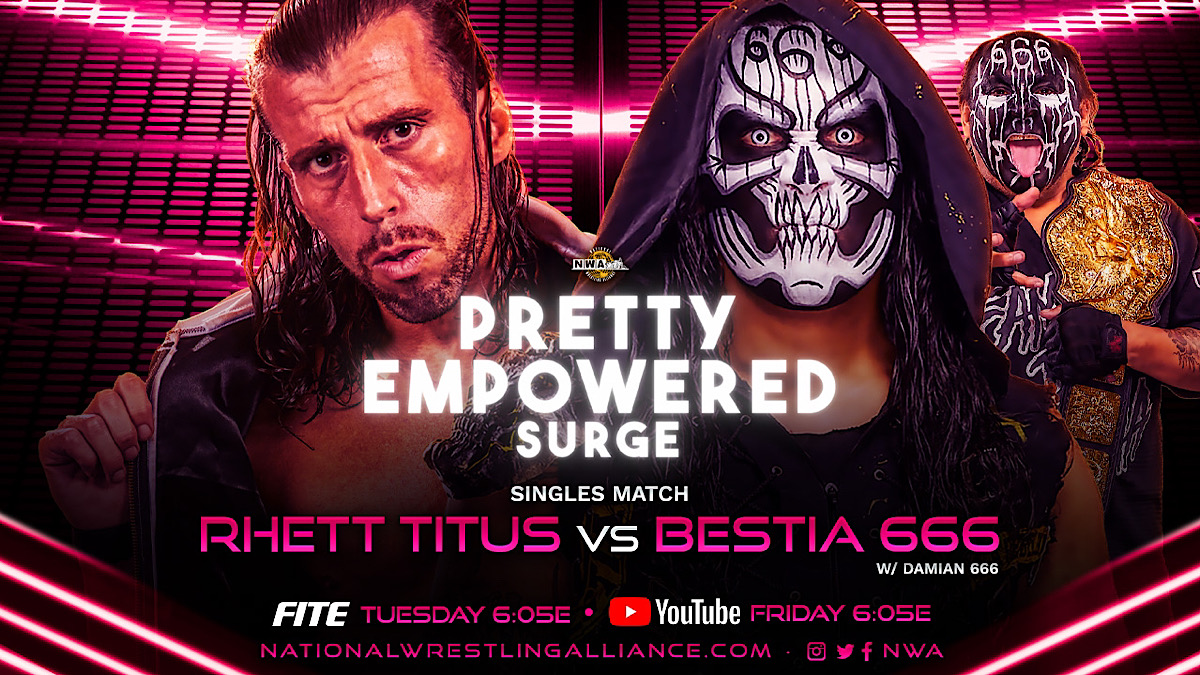 As the Bell rings, Titus offers a hand for a Code of Honor, and Bestia accepts.  Huh.  Go figure!  In any case, Bestia and Titus trade holds and both display beautiful chain wrestling early in the match, but a shoulder tackle by Titus allows him a chance to cover for a two count.  Bestia hammers his midsection and sends him to the ropes but Titus stops his momentum and drops to a headlock.  Bestia fights back up to a vertical base and tries a leapfrog, but Titus scouts it and goes for another headlock takedown.  A well-timed huracanrana by Bestia allows him to take control, and he chops away at Titus in the corner, but The Professional returns the receipt.  Bestia lands a dropkick to Titus and he’s sent outside, where Damien takes liberties as the ref is distracted in the ring by Bestia.  He rolls Titus back in and Bestia covers for a two count and then gets a clothesline to cover for another two count.  Both men trade blows but Titus targets his lower back and gets a back suplex drop for a two count.  He then whips Bestia back and forth in the corners and then unleashes a lariat to turn him inside out and Titus covers, but still gets a tow count.  Now Bestia lands with kicks followed by a roundhouse kick to Titus. He rushes at him in the corner, and Titus manages to get up a boot to the head.  He climbs up the top turnbuckle, but Bestia stops him and attempts a musclebuster but Titus maneuvers out.  Bestia sends him to the ropes, where Damien sprays his mist that unfortunately hits his son’s eyes, and Titus uses the opportunity to get a roll-up for the quick pin.

Envy and Paige are now with KiLynn King, and they both gush at how she is amazing in person. Envy asks her what it feels like to be the “King”, and King answers that it feels pretty good.  Paige and Envy like the vibe all three of them have, and Envy offers King a chance to be another “Pretty Empowered plus.”  King considers this, and every instinct wants me to yell at the screen like Admiral Ackbar and go, “It’s a trap!”

Oh, well, no accounting for taste, so let’s go to another unique match, and it’s a… 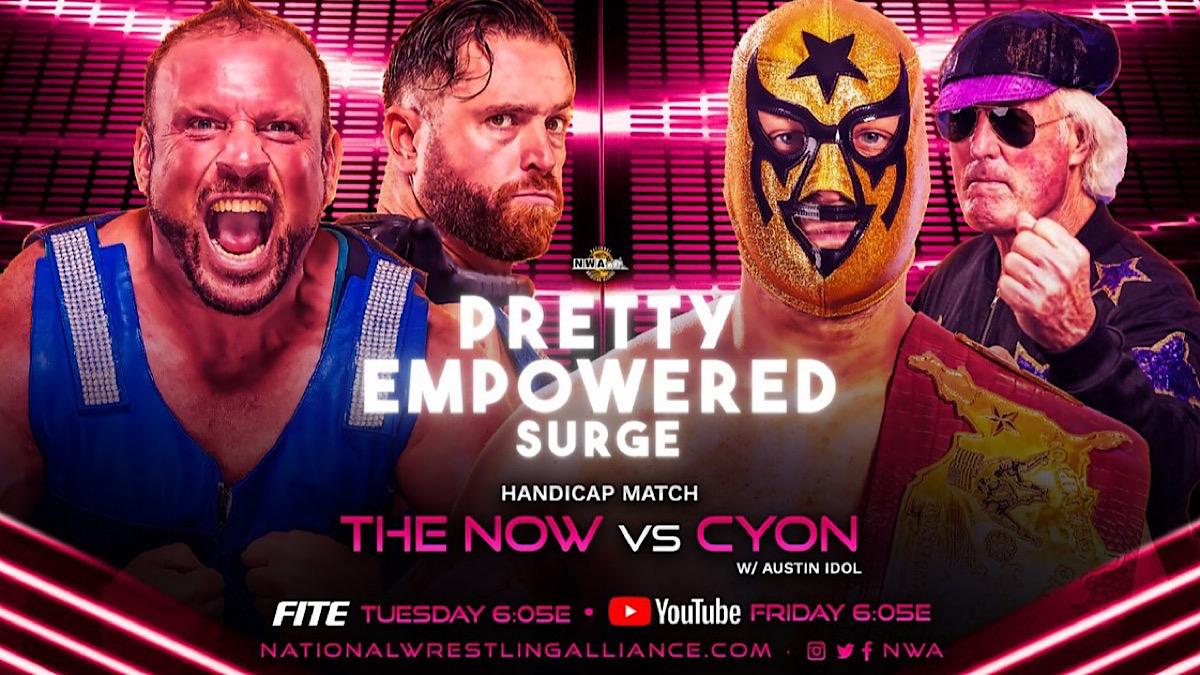 Apparently, Idol made this match to offer more challenges for Cyon so he will be more formidable when someone else tries to challenge him for the NWA National Title…or something like that.  Anyway, He holds his own against both members of The Now, but then Collins chops his knee and the tag team targets at the bad leg of Cyon.  Collins and Dalishus pull Cyon’s legs to make a wish and they don’t let up on the National champ.  As Dalishus pounds away at Cyon, he tags in Collins and they proceed to double suplex him.  Cyon rolls out, and Idol counsels him to stay out. He’s still raring to fight with the bad knee and all, but Idol keeps him away from the ring.  The ref counts and then calls the bell because…

Your Winners via Countout:  The Now

Davis also offers fans to see the matchup of Kamille versus Max the Impaler on night two of NWA 74, but since I covered that already, why don’t ya click here for what you missed that night?

Pretty Empowered says thanks for watching us and they are so “weepy” that we’ll miss them so….yeah right!  Envy and Paige drop the facade and bid us all, “Later, losers!” to close the show.

NWA PowerrrSurges, overall, are a mixed bag.  Some can really shine like The Fixers, and others don’t hit the mark.  I get what Envy and Paige were trying to do, but it felt kinda “meh” for my tastes.  I do hope they get more opportunities to shine as true heels, but this wasn’t it.

The matches were great, though.  Not crazy about how the Cyon match ended, but I get it as well.

For now, we’ll see you in seven!