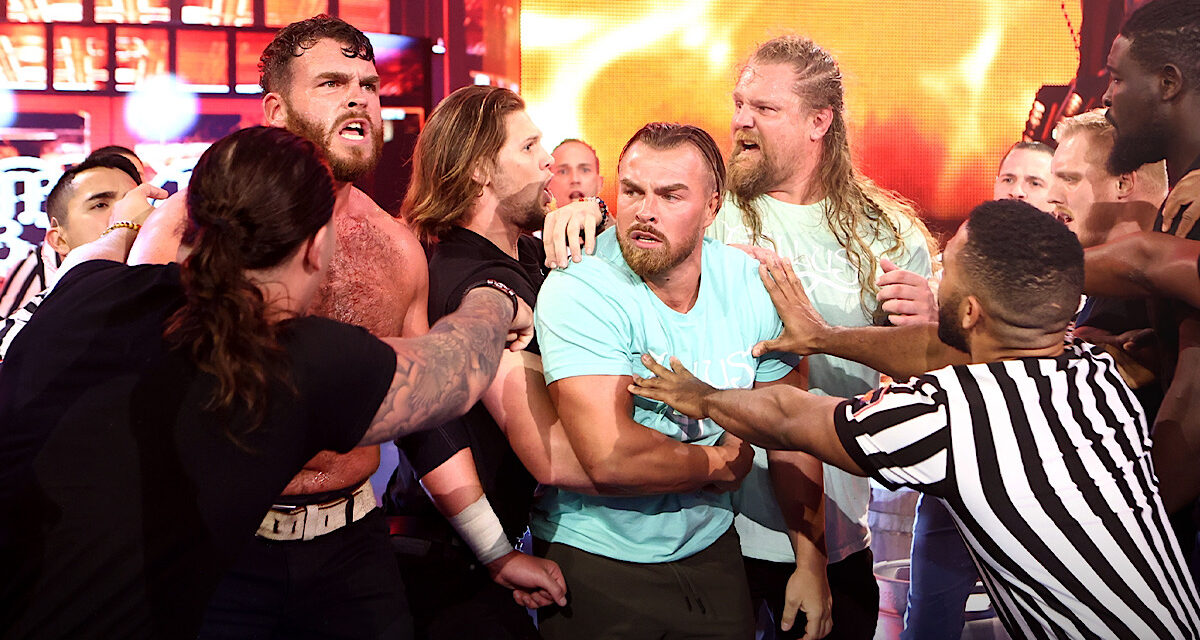 Ilja Dragunov opens the show in slick black to some “welcome back” chants. He references beating an “unbeatable machine” last year and plans to repeat this accomplishment – only this time against NXT Champion Bron Breakker. “Irish Ace” JD McDonagh appears instead and swears he’ll end the previously injured Dragunov’s career until the champion makes his entrance. Breakker hits the famous line on McDonagh: “You have a 33 and a third percent chance of winning!” He declares a triple threat match set for the main event of Halloween Havoc on October 22.

Meanwhile, Gallus is in a pull-apart brawl backstage with Brooks Jensen and Josh Briggs as Toxic Attraction heads to the ring. Afterwards, a promo package from The Schism threatens Cameron Grimes, who refused to join their ranks, although he maybe should have.

Rose is backed by Gigi Dolin and Jacy Jayne of Toxic Attraction, still the reigning and terror-ing NXT Women’s Champion. Henley gets some offense in and eventually makes a comeback, but a running knee from Rose puts it away. The champion takes a microphone and targets challenger Alba Fyre, who appears on-screen in the parking lot to set an “and new” sign on fire.

A vignette for Apollo Crews captures him writing in a notebook while discussing rival Grayson Waller. “One image sticks out crystal clear,” says Crews as Waller appears with bloodshot red eyes like some sort of future vision. Crews coming back down to NXT was supposed to be a resurgence, but it’s instead become ridiculous.

Ilja Dragunov runs into Xyon Quinn backstage, and the former calls him a “total mental moron.”

Lee enters with a young member of Connor’s Cure while D’Angelo is accompanied by Channing “Stacks” Lorenzo. The winner advances to the North American Championship ladder match at Halloween Havoc, and speaking of which, former champion Carmelo Hayes is watching the monitors with “Trick Willy” by his side. Hayes lost the championship to The Bloodline’s Solo Sikoa, who was stripped of it one week later in a totally redundant decision. But meanwhile, “Stacks” is ejected from ringside as D’Angelo takes control anyhow. Lee trips his opponent into the middle turnbuckle, but D’Angelo struggles to recuperate with an evidently injured knee. The referee throws up the “X” and the bells rings immediately after. A confused, empathetic Lee gets his hand raised to a stunned silent crowd, advancing to the ladder match alongside Hayes and Oro Mensah.

Hayes is interviewed about rival Lee’s new opportunity, but Mensah interrupts. Hayes respects the drip, “but at Halloween Havoc, it’s every man for themselves, playboy.”

The NXT Tag Team Champions Pretty Deadly take everyone through a day in their lives. They debunk waking up at 4 a.m. to lift weights and instead awake at 10 a.m. to eat breakfast together in bed. They discuss choosing their outfits, brushing their hair, and then the gym for some leapfrog. There’s no better tag team chemistry than sleeping in the same bed like Pretty Deadly.

It’s Ruca’s television debut, and commentary notes her accomplished college athletic background. Otherwise, her precursory vignettes highlight her love of the beach and surfing, but the in-ring is like a rough wave. Well, maybe not that bad, but certainly not smooth against another generally fledgling talent in Miller. Ruca showcases some twisting, rolling offense, and a flipping leg drop eventually hands her the victory before the competitors embrace post-match.

Gallus is somehow still bickering with security, but Joe Coffey delivers a right hand before he, Mark Coffey, and Wolfgang exit the building.

The scraggly hero fights against the creepy cult leader with multiple chest kicks, and flashbacks to a certain 2013 angle are oh-so vivid. The Dyad, Rip Fowler and Jagger Reed, blockade Grimes and Gacy briefly capitalize. Grimes looks for the Cave In, but distractions from The Dyad allow Gacy to hit a finishing handspring lariat to win a short and flat match.

Grayson Waller appears antsy over seeing Apollo Crews’ vision as if he didn’t film it himself for the cameras. McKenzie Mitchell suggests staying home next week, but he insists on appearing for the second edition of the Grayson Waller Effect.

Lyons and Zoey Stark were thrown into a main roster tag team tournament that they were eventually dropped from, but they’re riding the wave anyhow. Carter is one half of the NXT Women’s Tag Team Champions with Katana Chance, and she’s again the underdog against a bigger opponent in Lyons. The latter hits a tornado kick with her signature split-legged pin to gain the victory, “making a statement” on her road to gold.

Earlier today, Andre Chase and Chase University held a celebration over his victory against Carmelo Hayes last week. He vowed to beat Von Wagner at a future date and advance to the North American Championship ladder match at Halloween Havoc before Dave asked a question about confidence. He cusses out Dave as a “teachable moment” during the big Chase U pep rally.

Axiom and Nathan Frazer are tied in their best-of series, and the latter’s soccer highlights are shown in a metaphor of sorts.

Quinn has found himself a nice roster spot of being the large guy the underdog whips to prove himself. After taking some offense, Dragunov recuperates with a series of strikes and suplexes, and the Torpedo Moskau puts the large guy away.

Wendy Choo and Lash Legend exchange verbal assaults in a promo package, and their two personalities shine when it comes to it.

Diamond Mine implodes as Creed jumpstarts the matchup against the faction’s betrayer. Kemp’s singlet has the Diamond Mine logo spray painted out in red as he holds an abnormally long neck crank over his opponent. He eventually snaps and attacks Creed with numerous chair shots, shouting to the camera, “Julius Creed, if you want some, come get some!”

“Super Diva” Quincy Elliot cheers up a disappointed Sanga, who was defeated by Von Wagner last week. Xyon Quinn walks in, and Elliot says, “I took your advice, and I watched your match. And that X factor that you keep talking about? I just don’t see it.”

UK pub goers clash with American bar goers in tonight’s main event, where trash cans and tables are introduced early. Steel chair beats steel lid as Briggs and Jensen take control preceding picture-in-picture, but Gallus turns the tides soloing out the latter. Mark Coffey and Wolfgang strip their opponents of their belts before whipping away at skin to screams in the crowd, but they eventually get a taste of their own medicine. The American boys smash glass mugs over their opponents’ heads before Joe Coffey runs in, booted through a table. Wolfgang is sent through a second table, and with a trash can over his head, Mark is taken out by a double team finisher to close the Pub Rules match.

Gallus continues taking out referees and security until four blue-shirt police officers handcuff them away. It’s Briggs and Jensen, with Fallon Henley by their side, that earn the victory to close tonight’s episode of NXT.

NXT was rolling a little while ago in terms of match quality, but tonight’s only worthwhile bout was obviously the Pub Rules match. Too many shenanigans filled the episode, and in general, it was another long watch for NXT.