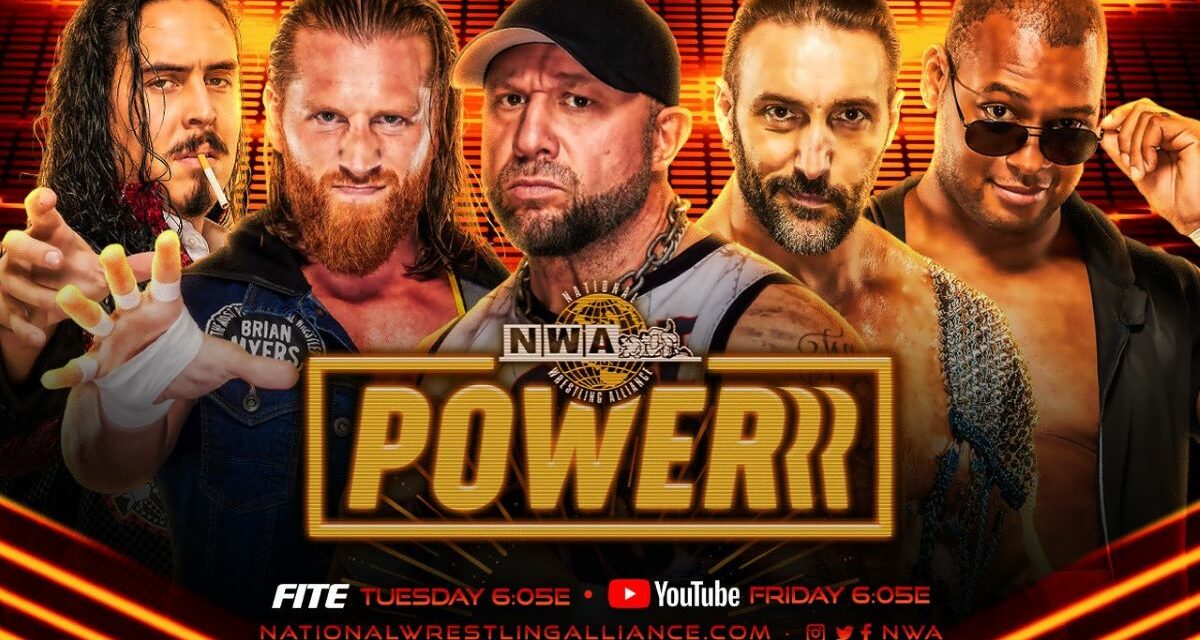 Not only is the National championship tournament in the National Wrestling Alliance really highlighting up-and-coming challengers, but the feuds are also adding fuel Into The Fire.  Since coming to the NWA, Bully Ray is not getting the hero’s welcome in Matt Cardona’s eyes. He states that because of his past Bully Ray has no friends to watch his back and to prove that point, he puts VSK and Mike Knox in a tag match against him.

Ray had a week to find someone to help him in tag action, and we’re gonna see who will be in his corner, as we head to the Skyways Studios in Nashville, TN. Joe Galli, Tim Storm, and Velvet Sky have the call, and we head right to the First match of the night and it’s for the … 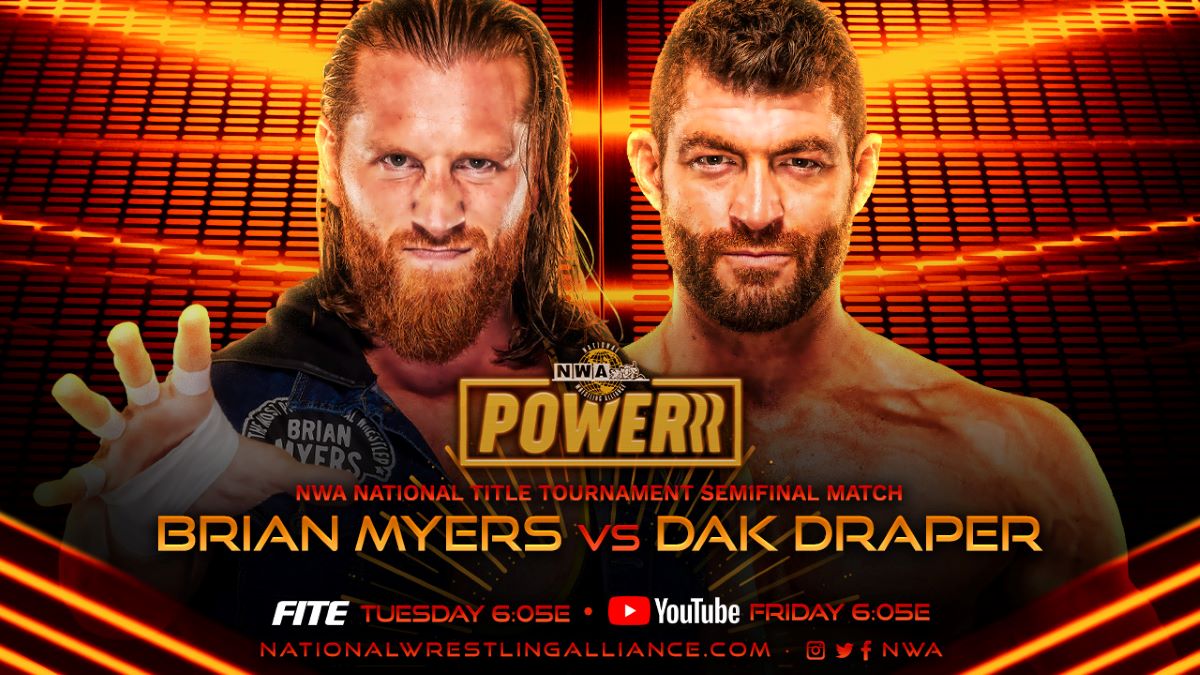 Draper looks strong against Bob Kapur’s Favorite Wrestler™, displaying technical prowess against the Most Professional Wrestler.  He gets a tilt-a-whirl slam for a two count to Myers, and he rolls out amid boos from the crowd.  Draper tries to bring him in the hard way, but Myers snaps his neck on the top ropes and that commences a beats down.  He drives his knee to the back of Draper in a sitting position with a chinlock.  Draper tries to get his momentum back, but Myers trips him up and hits a snapmare to a stiff kick to his back.  Draper fights back again and gets a belly-to-back suplex to create space.  Myers goes after him, and Draper pushes him off with his feet and then skins the cat to shoulder tackle Myers and follow up with a slingshot rollup for a two count.  He’s on a roll as he lands a dropkick and follows up to a second rope axe handle smash for another two count for Draper.  He grabs Myers who counters with a step-up enzugiri and then follows with an implant DDT to cover but gets a two count.  Myers goes for the kill with the Roster Cut but gets blocked by Draper who attempts the Magnum-KO.  Myers does a rollup and tries to use the ropes for leverage, but the ref catches him red-handed.  As Myers argues, Draper goes behind with a rollup of his own for the three count.

Your Winner, and Advancing in the NWA National Tournament:  Dak Draper

Not only does Draper look good as he punches his ticket into the finals, but Myers also suffers a loss and somewhere in Canada, a huge sigh of relief can be heard from the Kapur homestead.

in an interview taped earlier in the show, Galli talked with Bully Ray if he found a tag partner. Ray thought he had the perfect guy, and he said no to him.  Ray acknowledges it’s not a secret he isn’t the most loved person in the industry, but he won’t back down from a challenge.

(Author’s Note to Bully Ray:  If you read this, I can state the following with authority…at least you don’t have the same heat as CM Punk does backstage.  Hopefully, that will help you sleep at night.

Also, what’s going on with you and your brother D’Von?  Don’t ya have him on speed dial?  Eh, but what do I know.)

May Valentine is with Matt Cardona and Mike Knox about tonight’s challenge. Cardona “promises” he will be at ringside to cheer on Knox and VSK, but he won’t get physically involved. As Valentine inquiresto Knox on his loss to Ray in the Tables Match at NWA 74, and he vehemently denies there was a loss.  Knox is intense when he tells Valentine that Bully Ray was beaten by his own hands and in his own estimation, that was not a loss.

Kyle Davis is in the NWA Control Center with Breaking News. He confirms that at Hard Times 3, the Ten Pounds of Gold held by Trevor Murdoch will be defended against Matt Cardona.  Since Cardona gave up the belt at the Alwayz Ready PPV he has been champing at the bit to reclaim the heavyweight belt and has never lost the title.  The Spectaculars, fueled by Rolando Freeman’s winning ways, mostly against Cardona, are seeking to make a name for themselves, and Davis confirms they will have a chance against The Fixers for their NWA USA Tag titles at the pay-per-view. He also hints that NWA will see more international action, but can’t reveal more than that just yet.

But let’s head to the next match for the… 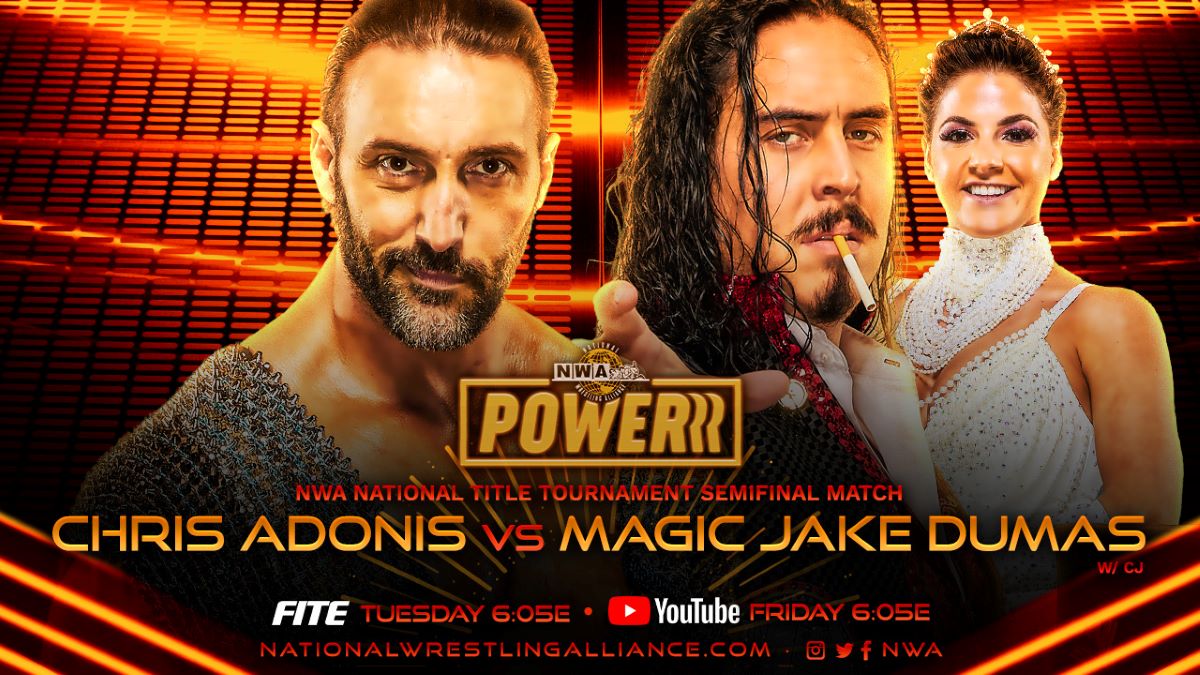 The full power of Adonis is on display, especially as he winks at CJ who looks to be cheering him on.  As commentary is wondering what’s going on in her head, I will say that CJ is at this point in the game the antithesis of what a valet should be, and that does make her dynamic with Dumas all the more interesting.

In any case, Dumas goes for a test of strength, and Adonis happily obliges with a Greco-Roman wristlock.  Adonis is in full control, while CJ smiles on.  Dumas manages to get a shoulder tackle in the corner and a big clothesline to cover for a two count.  He adds clubbing blows to Adonis’ chest to cover for a one count and then keeps the pressure on him with a chinlock.  Dumas follows with an arm trap Legsweep for a two count, and then he gets so frustrated he chokes Adonis.  Dumas offers a magic trick and signals the Masterlock. He gets Adonis’ own signature move locked in, and…silly Magician.  Masterlocks are for Adonis, and he breaks the submission with ease.  He goes back on offense with a shoulder tackle from the ropes followed by a spinebuster to Dumas to cover for another two count.  He chops hard at Dumas’ chest and then shoots to the corner.  Adonis rushes at him but eats a big boot from Dumas.  He goes up the top turnbuckle but Adonis cuts him off and tries to get the Masterlock in, but Dumas elbows him off. Dumas gets one of his playing cards, but Adonis crotches him on the top turnbuckle, and now he’s got the Masterlock cinched in.  Dumas tries to cut his eyes with the card in his hand, but Adonis really puts pressure until he loses the card as well as his consciousness.  Finally, the ref calls it.

Your Winner via Submission:  Chris Adonis

As Adonis gets a step closer to reclaiming the NWA National title, CJ raises the arm of Dumas who is understandably annoyed.  I suppose it’s hard finding good valets these days.

Now May Valentine is with Jordan Clearwater and Marshe Rockett, alongside BLK Jeez.  Clearwater and Rockett lay out a challenge for tag team gold against The Fixers. They proclaim they are physically dominant and no one can touch them. Jeez hypes up Tyrus and his NWA Television title defenses, and can challenge again for the Ten Pounds of Gold.  He also tells Valentine and the rest of us that IdolMania Sports Management, in conjunction with The Church’s Money, will have all the gold before long in the NWA because they are united as a family.

Now let’s go to a three-way match with… 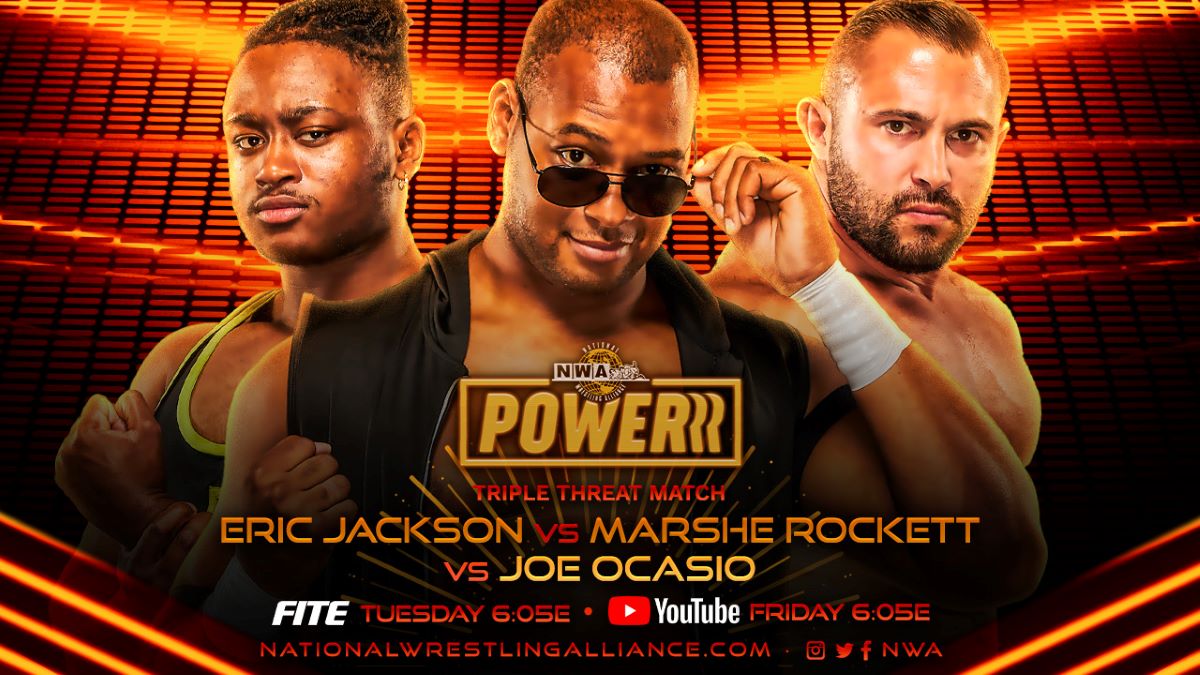 Ocasio tries to suggest an alliance with Jackson.  As Jackson looks like he’s down for that, Ocasio cheap shots him with a kick, and then he and Rockett go to work.  During that matchup, Ocasio turns his attention back to Jackson, who gets a boot up, and then lands a crossbody on Rockett who rolls out of the ring.  Jackson attempts a tope suicida, but Rockett shuts that down with a well-placed forearm.  Rocket gets him ready for a suplex to the outside of the ring, but then Ocasio comes up and he and Jackson reverse Rockett’s move with a double suplex, and Jackson gets a sling blade to Ocasio.  He charges at Ocasio, but he counters and gets a gut buster to cover Jackson, but Rockett pulls off to break the count.  Ocasio lands with elbows and shoots him to the ropes, but Rockett reverses and nails a standing dropkick to Ocasio and then delivers a Rockett Kick to Jackson to get the pin and the win.

Your Winner via Pinfall:  Marshe Rockett

We get a clip from “Thrillbilly” Silas Mason and Anthony Mayweather in the NWA National Tournament from this last NWA USA episode.  Honestly, though, read here for the recap, and know an exclusive interview with the “Thrillbilly” is in the works.

May Valentine talks with Ricky and Kerry Morton about their relationship with The Fixers after the NWA United States Tag Team Champions, Jay Bradley and Wrecking Ball Legursky, attempted to mend fences between the two teams. Ricky states after all this time in the wrestling business he doesn’t trust anybody, because they’re after gold at the end of the day. Kerry agrees, but if they’re trying o not be complete douchenozzles, then they’re cool.

Speaking on The Power of Douchenozzlery™, it’s time for the Main Event between… 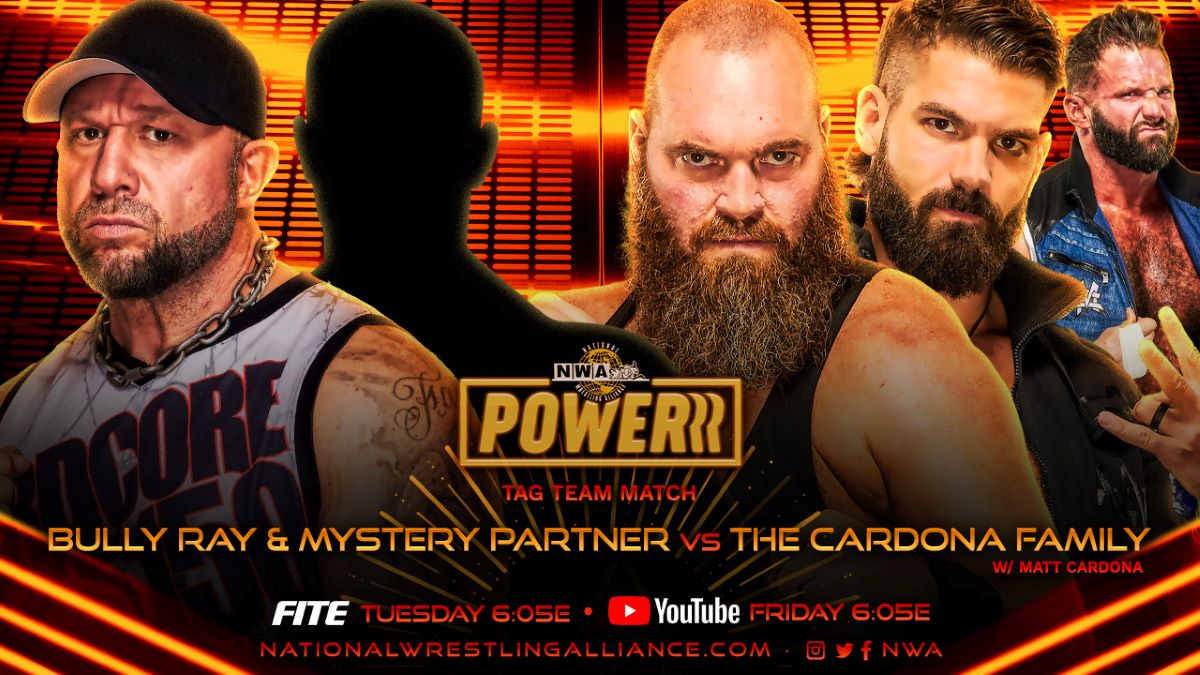 The Cardona Family (VSK and Mike Knox, with Matt Cardona) vs. Bully Ray and ???

Bully Ray appears by himself, and Cardona gets on the mic and taunts him further by saying he was right and he has nobody.  Well, either way, Ray is raring to go, so I guess this is a handicap match.  Well, OK, that works for me.

Ray starts on VSK and he is firmly in the driver’s seat.  He chops VSK in front of Cardona to make a personal statement and nails a back body drop.  Ray lands a blow to Knox who drops from the ring apron.  Vsk goes up top, but Ray catches him and sends him down to the mat the hard way, a la Ric Flair style (Woo!).

Cardona distracts Ray, and that’s enough for Knox to land a running crossbody, and now The Cardonas take liberties with Bully Ray.  There’s a slam by Knox, who tags in VSK to nail a slingshot senton for just a one count.  Knox is back in with an elbow drop for one count and he and VSK double-team on Ray to no avail.  Now Bully Ray gets a desperation elbow to create some space, but Knox gets in with a big boot, and then he sends Ray to the ropes where both men land a double clothesline to knock each other out.  It looks bad, but…wait a sec!  Thom Latimer comes in and offers to tag.  Ray reaches on and now Latimer is Evil en Fuego, clearing house on The Cardonas.  One pop-up powerbomb to VSK is enough as Latimer covers him for the one, two, and three.

Your Winner via Pinfall:  Bully Ray and Thom Latimer

Bully Ray is in disbelief as Latimer offers his hand, and he accepts.  So a new alliance is made and apparently, Bully Ray does have a friend as the show goes to the credits.

Not sure how this will make a difference in the long run with EC3, but Latimer teaming with Bully Ray offers a new dynamic with any feuds with The Cardonas.  Draper and Adonis’s advance looks promising as they make their way into the NWA National Tournament.  Even the three-way between Rockett, Jackson, and Ocasio looked very promising of the talent coming up in the NWA.

For now, See you in Seven!