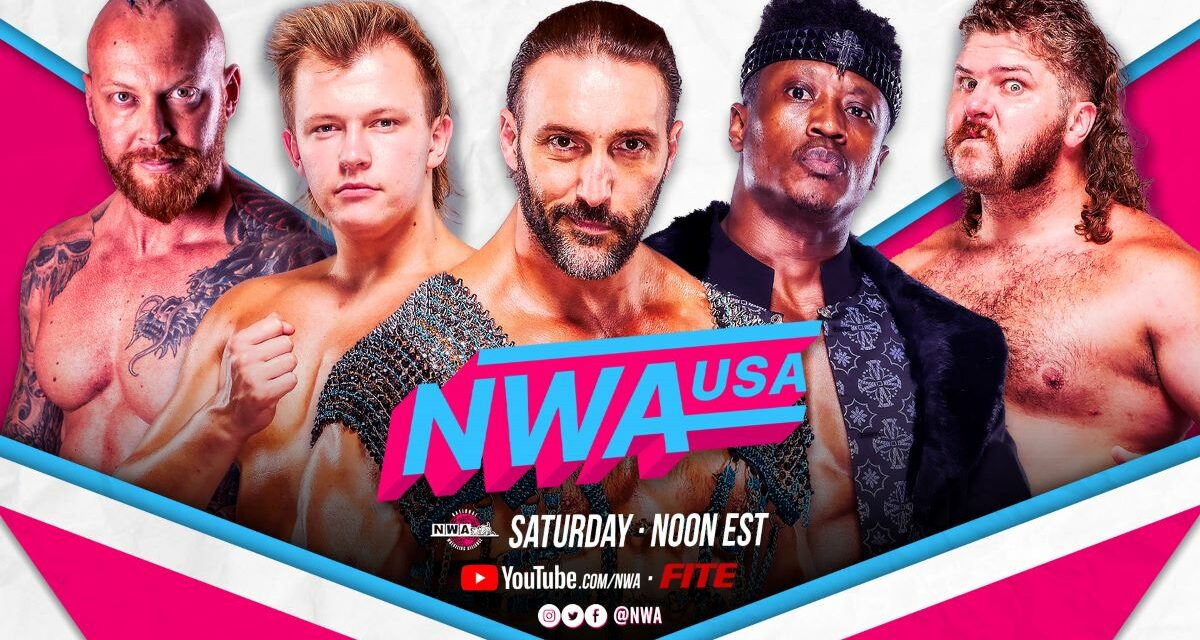 The road to gold at Hard Times In New Orleans rages on as the next part of the NWA National Title tournament continues.  Caprice Coleman is also part of the tournament, but he’s looking to avenge a loss he suffered at the hands of Chris Adonis at Celebration 74.  Can the Ageless One keep away from the Masterlock, and redeem his previous loss?

We’ll find out as we head to the Skyway Studios in Nashville, TN.  Joe Galli, Tim Storm, and Velvet Sky have the call as we start right away in the first match for the… 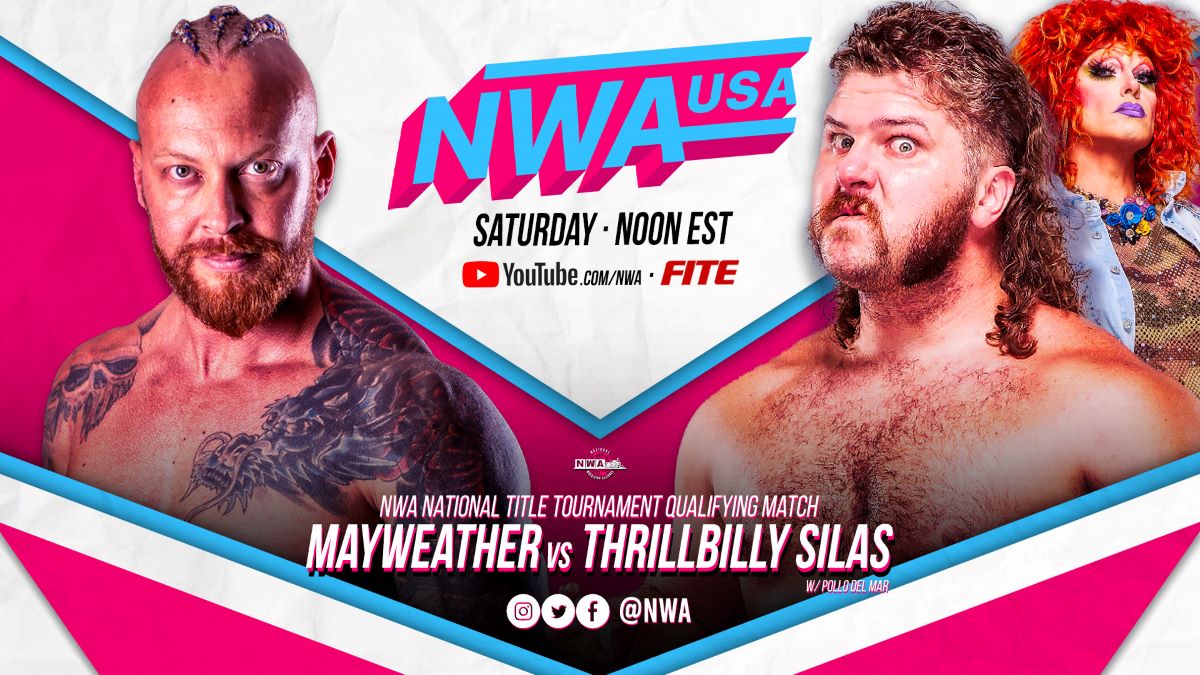 Since coming back on night one of NWA 74, Mayweather is on a path to not only reclaim the belt he lost to Jax Dane but also seek revenge against The Dane event himself.  But he has tough competition in The Thrillbilly tonight, as Del Mar cheers on her man in an outfit that Galli suggests the moon is starting to wax eloquent.  He says we can’t show all of Del Mar’s outfit, but I think Tennessee ain’t ready for that jelly.

Silas starts strong, but Mayweather quickly gets back in control and manages to chop and hammer him down.  Mayweather with a back body drop to cover for a two count.  As the ref was tending to Del Mar on the outside, Silas rakes Mayweather’s eyes and lands a big boot to cover for a two count.  Del Mar is incensed and loudly yells, “Where’d you get your education?  Tennessee?”  For some reason, the crowd is none too pleased with that statement.

Silas stays on offense with a short arm clothesline for a quick two count and then rakes Mayweather’s back.  Mayweather gets a pump handle exploder suplex and starts to fire back.  Silas is in the corner, and Mayweather rushes at him, but he evades at the last minute.  He gets Mayweather on his Thrillride finisher (a spinning Black Hole Slam) to get the pin and the win.

Your Winner via Pinfall, and Advancing in the NWA National Tournament:  Thrillbilly Silas

May Valentine is backstage with Jax Dane and Chris Silvio, Esquire. Silvio states there was a miscarriage of justice, and this is just another roadblock put up by Corgan. They’re pursuing legal options, says Silvio, on where Dane will end up next. Dane then says, in the third person says The Dane Event is a champion wherever he goes, and there is no Dane Event like The Dane Event.

Valentine is now with the NWA President and Owner, William Patrick Corgan.  He speaks on having Ricky “The Dragon” Steamboat as an advisor to the NWA and coming up with the National title tournament as a way of honoring the legacy of the NWA. Among other matchups to expect in the upcoming weeks, like The Fixers defending the USA Tag belts against Gold Rushhhh, he announces that there will be a six-way scramble for a guaranteed shot at the NWA Junior Heavyweight Championship next week on NWA USA.  I’m curious about who will be in that matchup.

Kyle Davis in the NWA Control Center about what took place on NWA POWERRR, and what that means for the upcoming Hards Times 3 PPV.  With all due respect, I don’t recap recaps, and I’ll direct you to my stuff later if you read on.  But let’s move on to your next match in… 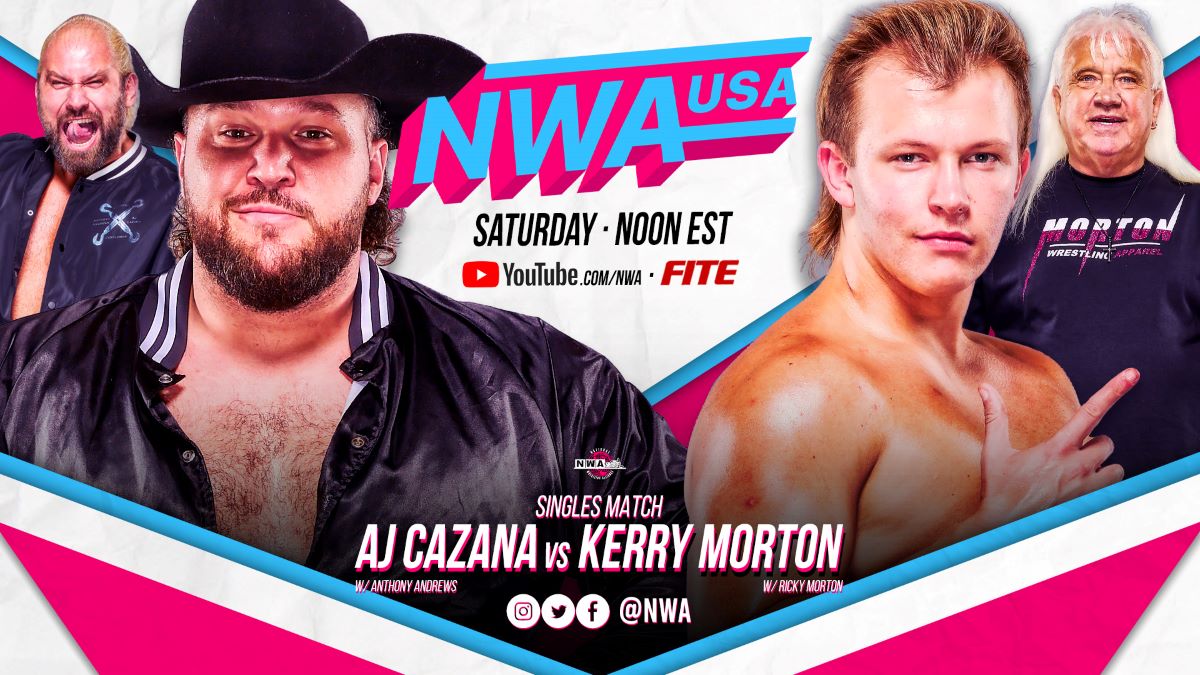 “The Future Legend” Kerry Morton (with Ricky Morton) vs. “The Legacy” AJ Cazana (with Adrian Andrews)

This is a showcase of next-generation superstars, but it’s also a classic Size (Cazana) versus Speed (Morton) matchup between the two men.  Morton is able to stick and move against “The Legacy” and land a crossbody for a quick two count.  Cazana lifts Morton in a Gorilla press to show off to the fans.  He manages to wriggle out, but gets leveled by a clothesline and Cazana follows by tossing him halfway across the ring and gets Morton in the corner with some tremendous shoulder tackles.  Cazana with a corner splash and then whips to the other corner of the ring, but Morton ducks out of the charging Legacy and ties to work the midsection.  Cazana stops that with a scoop slam and then follows with a powerslam to cover for another two count.  Cazana sends him to the ropes, and Morton attempts a sunset flip. Cazana sits down but misses the mark, and bruises his tailbone.  After a couple of attempts, Morton nails the Kiss it Goodbye knee lift to cover for the three count.

After the match, both men shake hands, but Cazana doesn’t let go of the grip, indicating this is far from over between them.

Valentine is with the NWA Women’s Champion, Kamille, on who has a chance to beat her for The Burke. She gives props to the women’s roster and indicates women like Taya Valkyrie, Kilynn King, and even Max the Impaler are double tough, but they can’t beat The Brickhouse. She is the One-Time champ, and no one can take it away from her. Valentine inquires about Latimer’s chances for gold in the NWA, and Kamille highlights his prowess in and out of the ring (if you catch her drift) and states he deserves the Ten Pounds of Gold and everything in between.

There’s a recap of The Question Mark taking out “Question Mack” and spooking Aron Stevens from the last NWA POWERRR, but read it here for what you missed this past Tuesday.

Valentin now has “Magic” Jake Dumas and CJ and asks what is their relationship. Dumas makes it clear for the last time that it’s no one’s business. When she asks the same question to CJ, she responds in Portuguese.  Thanks to my skills at Google Translate, I can tell you what she and May Valentine said:

CJ:  I just work with Dumas, but he’s nothing like the guy that writes for Slam! Wrestling.  He is handsome but kinda weird, though.

Valentine:  I agree, Milagro is not like Dumas, and he really is a unique writer.*

The Fixers try to slide up to CJ, but she is not having it.  Dumas says to keep their hands off her, and Matt Vine (who’s apparently now Team Fixers) challenges The Magic Bastard, and Dumas replies with…Nah.  But, you know that’s gonna happen soon, right folks?

And now we have the Main Event, and it’s the final… 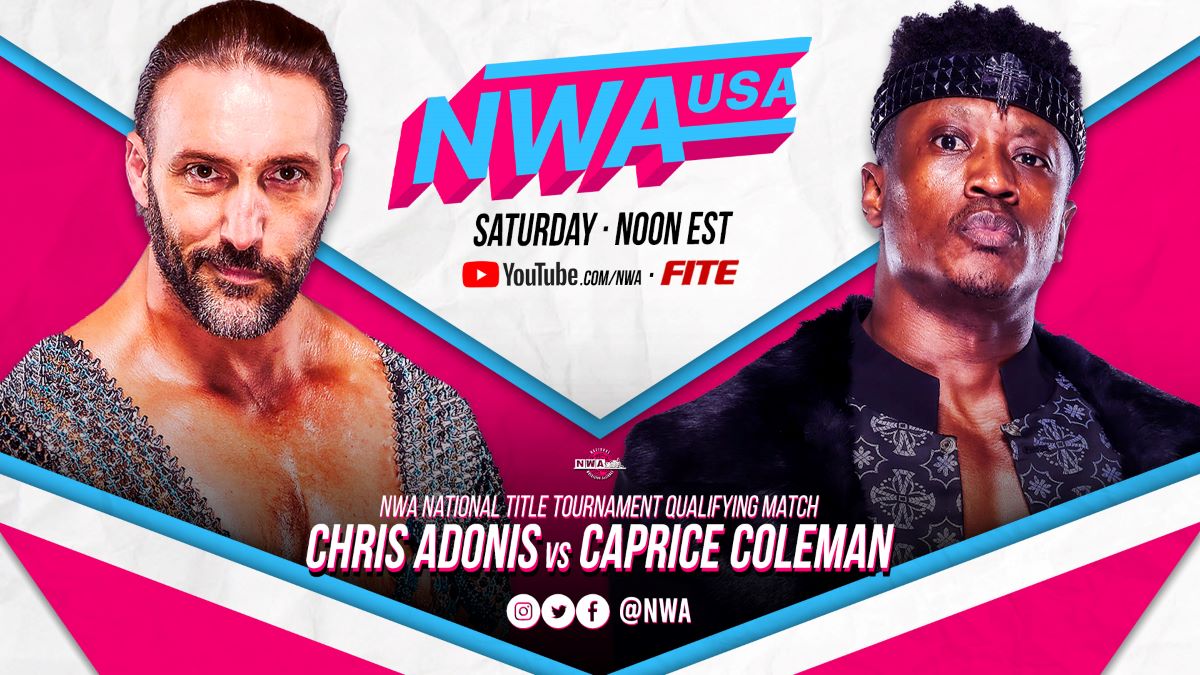 The bell rings and Coleman is in control with a wristlock, and then follows with arm drags to The Masterpiece.  Adonis tries to overpower but The Ageless One goes back to arm drags to further weaken Adonis so he is unable to clamp The Masterlock submission.  Adonis throws Coleman out of the ring and then rams his back to the edge of the ring apron.  He continues to work back of Coleman and follows with a backbreaker.  As Adonis further works to aggravate his back, Coleman gets knees to the side of Adonis’s head.  A head scissors takedown by Coleman and an axe kick to Adonis’ neck give him a cover for just a two count.  Coleman switches up to a slam for another two count, and then he attempts a slingshot leg lariat but misses the target. Adonis stalks him and goes for The Masterlock, but Coleman rolls through for a pin attempt for a two count.  Coleman goes to a running dropkick and he gets nothing but the turnbuckles in the corner.  Now Adonis cinches the Masterlock, and sinks it in so deep he turns it into a modified camel clutch, and Coleman passes out from the pain, and the referee has to call it.

Your winner via Submission, and Advancing in the NWA National Tournament:  Chris Adonis

Adonis is looking triumphant as he gets a step closer to regaining back his title as the show goes to the credits.

* None of that was really said by CJ and Valentine, but I am curious who’s gonna call me out on that.

I am definitely a sucker for a good tournament, and Silas/Mayweather was a good starter, and Adonis/Coleman finished the show strong.  I am curious to see how far the “Thrillbilly” goes in the tournament, alongside his girl Del mar.  Morton/Cazana also did a fantastic job, and I hope more matches like this are in the future.